Physical and Mechanical Evaluation of Five Suture Materials on Three Knot Configurations: An in Vitro Study
Previous Article in Journal

:
The management of fishery residues and plastics is considered to be a vital strategy for conserving resources and maintaining the quality of the environment. Poly(l-lactic acid) (PLA) is a commercially promising, renewable, and biodegradable plastic. In this study, a PLA depolymerase was produced in a squid pen powder (SPP) and recycled plastic waste (PLA powder)-containing medium by Pseudomonas tamsuii TKU015, a bacterial strain isolated from Taiwanese soil. This PLA depolymerase had a molecular weight of 58 kDa and was purified to homogeneity from the supernatant of a TKU015 culture. The optimum pH of TKU015 PLA depolymerase is 10, and the optimal temperature of the enzyme is 60 °C. In addition to PLA, TKU015 PLA depolymerase degraded fibrinogen and tributyrin, but did not hydrolyze casein, triolein, and poly(β-hydroxybutyrate). Taken together, these data demonstrate that P. tamsuii TKU015 produces a PLA depolymerase to utilize SPP and polylactide as carbon/nitrogen sources.
Keywords:
PLA; squid pen; Pseudomonas tamsuii; PLA depolymerase; degradation

Biodegradable plastics (BPs) can be degraded into water and CO2 by microorganisms in bioactive environments. Thus, from the perspective of environmental protection and solid waste management, BPs are increasingly considered as attractive alternatives to petroleum-derived plastics. Poly(l-lactic acid) (PLA) is a commercially promising, renewable, and biodegradable plastic. However, the degradation of PLA in natural environments is more difficult than other aliphatic polyesters such as poly(β-hydroxybutyrate) (PHB) and poly(ε-caprolactone) (PCL) [1]. Therefore, methods for enhanced degradation of PLA must be developed. Treatment with PLA-degrading enzymes is one such method that is expected to accelerate PLA degradation. Recently published works have reported that PLA is hydrolysable by enzymes such as proteinase K from Tritirachium album [2,3,4], a silk fibroin-degrading enzyme from Amycolatopsis orientalis [5], lipases from Rhizopus delemer [4] and Alcaligenes sp. [6], esterase from Paenibacillus amylolyticus TB-13 [7], cutinase-like enzyme from Cryptococcus sp. S-2 [8], and the polyester polyurethane-degrading enzyme from Comamonas acidovorans TB-35 [9]. Most of the reported PLA-degrading enzymes belong to the serine protease family, as PLA has as structure similar to fibroin, a native substrate of serine proteases [10]. However, because PLA is an aliphatic polyester, it can also be decomposed by lipases or esterases. Most of the PLA-degrading strains belong to the Amycolatopsis genus [11,12,13,14], a genus that might play an important role in the natural biodegradation of PLA [15]. However, it is unclear as to how these various enzymes with different catalytic properties achieve the hydrolysis of PLA. It is also unclear whether several enzymes are needed simultaneously to completely degrade PLA. Furthermore, it is interesting to find other more unique enzymes capable of efficiently degrading PLA.
In this study, a PLA-degrading bacterium, Pseudomonas tamsuii, was isolated. This bacterium exhibited a significantly high level of PLA-degrading activity when squid pen powder and recycled plastic waste (PLA powder) were added to the basal liquid medium. The use of inexpensive culture media as well as practical fermentation processes can produce PLA-degrading enzymes for large-scale recycling of PLA wastes in an economically efficient manner. The production of this enzyme and its use to recycle fishery wastes and PLA has not been reported previously. In addition, a PLA-degrading enzyme was purified from Pseudomonas tamsuii TKU015.

Shrimp shells and squid pens were purchased from Shin-Ma Frozen Food Co. (I-Lan, Taiwan) and used as carbon/nitrogen sources for the production of PLA-degrading enzymes by microorganisms. Recycled PLA plastic wastes were prepared as powders and added to the basal liquid medium for the production of PLA-degrading enzymes. PLA pellets (2002D, number-average molecular weight, Mn: 1.25 × 104) were obtained from Cargill Dow, Minnetonka, MN, USA. PLA powders (particle size 200–300 μm) for enzymatic assays were prepared by dissolving 50 mg of PLA pellets in 50 mL of dichloromethane mixed with 500 mL of methanol. PLA powders were obtained by homogenizing the PLA/dichloromethane/methanol solution with a homogenizer at 10,000 rpm for 5 min. PLA powders were filtered and air-dried for 24 h, then dried in a vacuum oven overnight at 30 °C. All chemicals used were of analytical grade.

The strains used in this study include Pseudomonas tamsuii TKU015, which was isolated from Taiwanese soil and stocked in our laboratory [16]. P. tamsuii TKU015 produced high levels of extracellular chitinase, chitosanase, nattokinase, and insecticidal activities when grown with shrimp shell powder (SSP) or squid pen powder (SPP) as the sole carbon and nitrogen source [16,17,18]. The strain was maintained on SPP plates (0.5% (w/v) SPP, 0.1% (w/v) K2HPO4, 0.05% (w/v) MgSO4·7H2O, and 1.5% (w/v) agar) at 4°C.

Microorganisms were screened for PLA degradation activity in a medium containing 0.25% (w/v) recycled plastic wastes (PLA powder), 0.25% (w/v) SPP, 0.1% (w/v) K2HPO4, 0.05% (w/v) MgSO4·7H2O, and 1.5% (w/v) agar in distilled water. This medium was also used for routine cultivation of the screened microorganism. PLA-degrading strains were screened based on growth on PLA/SPP agar medium at 30°C for 5–10 days and to formation of clear zones around colonies. Organisms obtained from this screening process were subcultured in liquid media (containing 0.25% SPP, 0.25% PLA powder, 0.1% K2HPO4 and 0.05% MgSO4·7H2O) in shaking flasks at 30 °C on a rotary shaker (150 rpm, LM-570R, Yihder, New Taipei City, Taiwan). After incubation for five days, the culture broth was centrifuged (4 °C at 12,000× g for 20 min, Model 5922, Kubota, Tokyo, Japan), and supernatants were collected for PLA-degrading activity measurements using the procedure described below. P. tamsuii TKU015 showed the highest PLA-degrading activity. This organism was maintained on PLA/SPP agar and used throughout this study.

The strain was pre-cultivated in a flask containing 0.25% (w/v) recycled plastic wastes (PLA powder), 0.25% (w/v) SPP, 0.1% (w/v) K2HPO4, and 0.05% (w/v) MgSO4·7H2O at 30 °C with reciprocal shaking at 150 rpm for 24 h. This medium, which contained minimal concentrations of PLA powder and SPP, was named MPS. One millilitre of pre-culture was transferred into 100 mL of PLA/SPP medium with appropriate concentrations of PLA and SPP. Three types of enriched MPS (2×MPS, 3×MPS and 4×MPS) contained two, three, and four times the aforementioned amounts of PLA powder and SPP in MPS. The culture temperature, volume and pH of the medium were also investigated. Cultures were cultivated under optimal culture conditions with rotary shaking at 150 rpm for five days. At various times during the cultivation, 1-mL aliquots of the culture were harvested, and the optical densities at 660 nm (OD660) of the aliquots were measured to investigate cell growth. In parallel, the culture broth was centrifuged (4 °C at 12,000× g for 20 min), and the enzymatic activities of the supernatant were measured as described below.

PLA powder (0.1%, w/v) was emulsified with Plysurf A210G (0.01%, w/v) in 50 mM phosphate buffer (pH 7.0) and used as the substrate. Enzyme solutions were mixed with PLA emulsions to various final concentrations in a total volume of 2 mL, then incubated at 50 °C for 3 h. The degradation products that were formed were measured with an l-Lactic acid assay kit (Megazyme, Wicklow, Ireland). One unit (U) of PLA-degrading activity was defined as the amount of enzyme required to produce 1 μmol of lactate equivalent in 1 h.

Protein contents were determined using the Bradford method with a Bio-Rad dye reagent concentrate. Bovine serum albumin was used as the standard. Aromatic amino acids (phenylalanine, tyrosine, and tryptophan) exhibit an absorption band between 260 and 280 nm. To recover the protein after purification via column chromatography, protein concentrations were estimated by comparison to the absorption at 280 nm of the control tryptophan-containing standard [19].

Sodium dodecyl sulphate-polyacrylamide gel electrophoresis (SDS–PAGE) was performed on a 12% gel using a discontinuous system [19]. To visualize protein bands, the gel was stained with Coomassie brilliant blue R-250. A low molecular weight marker was used to estimate the Mw of the purified proteins.

2.9. Effects of pH and Temperature on PLA-Degrading Activity

2.10. Activities of the Purified PLA Depolymerase for Various Substrates

To measure protease activity, a dilute enzyme solution (0.2 mL) was mixed with 1.25 mL of 1.25% casein in phosphate buffer (pH 7) and incubated for 30 min at 37 °C. The reaction was terminated by the addition of 5 mL of 0.19 M trichloroacetic acid (TCA). The reaction mixture was centrifuged, and the soluble peptide content in the supernatant fraction was measured with tyrosine as the reference compound [17]. One unit of protease activity was defined as the amount of enzyme required to release 1 μmol of tyrosine in one minute. Nattokinase activity was measured with a fibrin degradation assay [17]. First, 0.4 mL of 0.72% fibrinogen was placed in a test tube with 0.1 mL of 245 mM phosphate buffer (pH 7) and incubated at 37 °C for 5 min. Then, 0.1 mL of a 20 U/mL thrombin solution was added. The solution was incubated at 37 °C for 10 min, 0.1 mL of diluted enzyme solution was added, and incubation was continued at 37 °C. This solution was mixed after 20 and 40 min of incubation. At 60 min, 0.7 mL of 0.2 M trichloroacetic acid (TCA) was added, and the solution was mixed. The reaction mixture was centrifuged at 15,000× g for 10 min. Then, 1 mL of the supernatant was collected, and the absorbance at 275 nm was measured. In this assay, 1 unit (fibrin degradation unit, FU) of enzyme activity is defined as a 0.01 unit increase in the absorbance at 275 nm of the reaction mixture per minute.
Emulsions of 0.1% (w/v) triolein, tributyrin, and poly(β-hydroxybutyrate) were prepared with 0.01% (w/v) Plysurf A210G. The emulsified triolein, tributyrin, or poly(β-hydroxybutyrate) mixtures were incubated with purified enzyme in 10 mM Tris–HCl buffer (pH 9.5) at 37 °C for 30 min. Hydrolysis of the emulsified triolein, tributyrin, or poly(β-hydroxybutyrate) was measured as a decrease in turbidity (absorbance at 630 nm).

3.1. Selection of a PLA Depolymerase-Producing Strain

Soil samples were collected from a variety of locations in Taiwan, such as university campuses, house gardens, farmlands, weed fields, plateaus, roadsides, riversides, seasides, and dumping grounds. Small portions of soil sample suspensions were plated onto PLA-emulsified agar medium, and plates were incubated at 30 °C for 5 to 10 days. To screen for microorganisms that produce PLA-degrading enzymes, the medium contained emulsified PLA to induce enzyme production. However, to produce concentrated PLA depolymerase, the nutrient SPP must be added to the agar medium. P. tamsuii TKU015, which was stocked in our laboratory, was found to be the most effective PLA-degrading microbe in our culture collection. This microbe formed a large and clear hydrolytic zone on PLA-emulsified agar medium. In following experiments, we investigated the optimum conditions for PLA depolymerase production in P. tamsuii TKU015.

3.3. Purification of the Enzyme

3.4. Effects of pH and Temperature 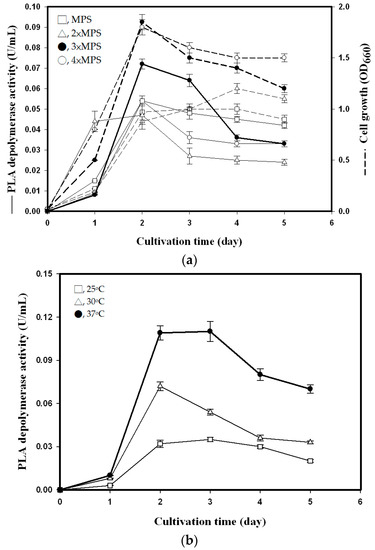 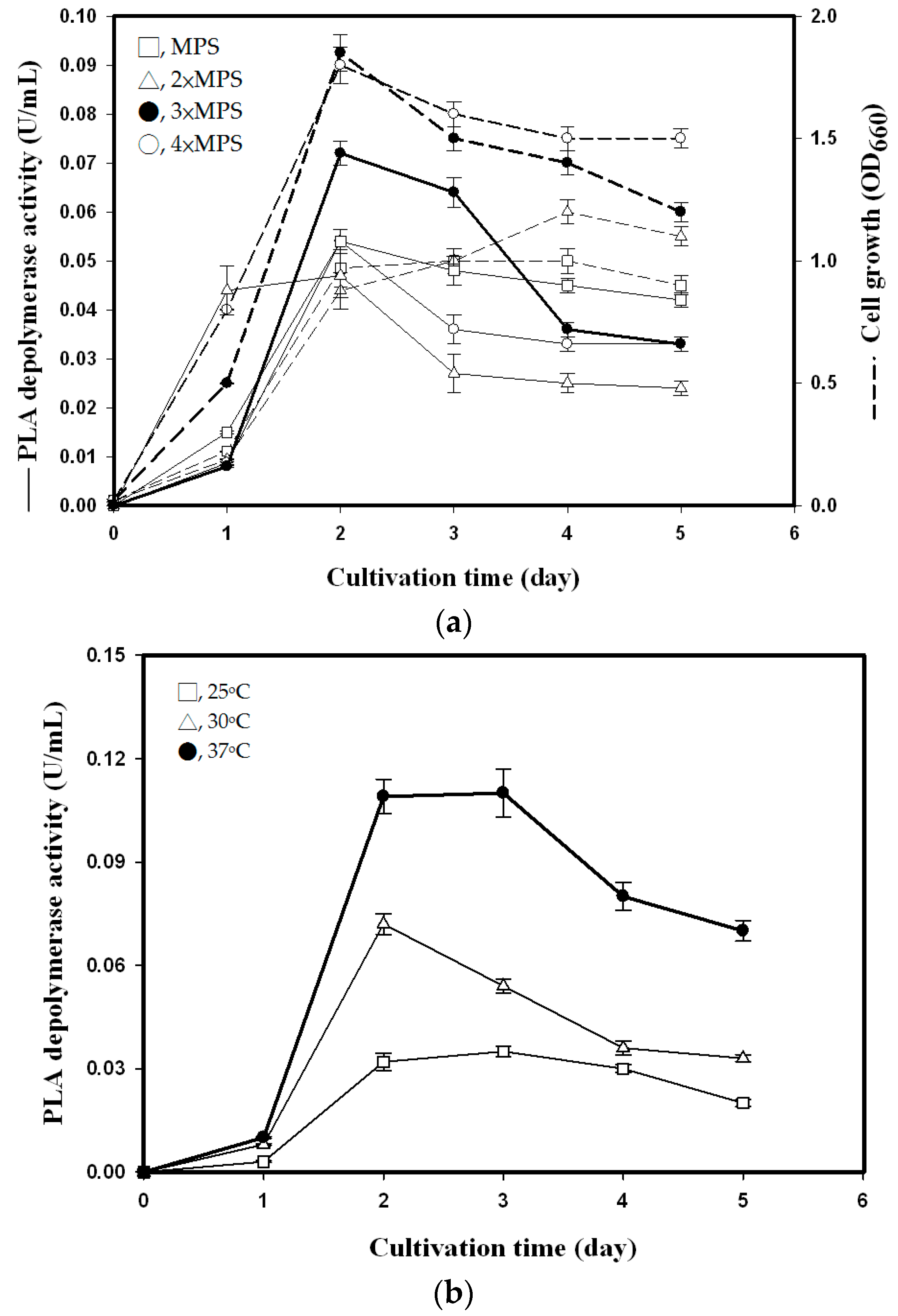 Table 2. Substrate specificities of TKU015 PLA depolymerase for the hydrolysis of several representative substrates.
All data are expressed as mean ± S.D. from three different experiments (each experiment was conducted in triplicate). Data with different letters are significantly different at p < 0.05.