Bionanocomposite Blown Films: Insights on the Rheological and Mechanical Behavior

In this work, bionanocomposites based on two different types of biopolymers belonging to the MaterBi® family and containing two kinds of modified nanoclays were compounded in a twin-screw extruder and then subjected to a film blowing process, aiming at obtaining sustainable films potentially suitable for packaging applications. The preliminary characterization of the extruded bionanocomposites allowed establishing some correlations between the obtained morphology and the material rheological and mechanical behavior. More specifically, the morphological analysis showed that, regardless of the type of biopolymeric matrix, a homogeneous nanofiller dispersion was achieved; furthermore, the established biopolymer/nanofiller interactions caused a restrain of the dynamics of the biopolymer chains, thus inducing a significant modification of the material rheological response, which involves the appearance of an apparent yield stress and the amplification of the elastic feature of the viscoelastic behavior. Besides, the rheological characterization under non-isothermal elongational flow revealed a marginal effect of the embedded nanofillers on the biopolymers behavior, thus indicating their suitability for film blowing processing. Additionally, the processing behavior of the bionanocomposites was evaluated and compared to that of similar systems based on a low-density polyethylene matrix: this way, it was possible to identify the most suitable materials for film blowing operations. Finally, the assessment of the mechanical properties of the produced blown films documented the potential exploitation of the selected materials for packaging applications, also at an industrial level. View Full-Text
Keywords: biopolymers; bionanocomposites; nanoclays; rheological behavior; mechanical properties; film blowing process biopolymers; bionanocomposites; nanoclays; rheological behavior; mechanical properties; film blowing process
►▼ Show Figures 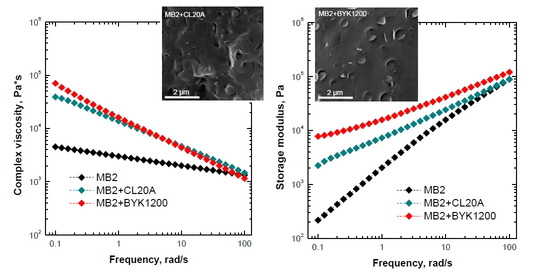