Asiatic acid (AA), a natural triterpene found in Centalla asiatica, possesses polypharmacological properties that can contribute to the treatment and prophylaxis of various diseases. However, its hydrophobic nature and rapid metabolic rate lead to poor bioavailability. The aim of this research was to develop a thermoresponsive nanogel from hyaluronic acid (HA) for solubility and stability enhancement of AA. Poly(N-isopropylacrylamide) (pNIPAM) was conjugated onto HA using a carbodiimide reaction followed by 1H NMR characterization. pNIPAM-grafted HA (HA-pNIPAM) nanogels were prepared with three concentrations of polymer, 0.1, 0.15 and 0.25% w/v, in water by the sonication method. AA was loaded into the nanogel by the incubation method. Size, morphology, AA loading capacity and encapsulation efficiency (EE) were analyzed. In vitro cytocompatibility was evaluated in fibroblast L-929 cells using the PrestoBlue assay. Single-dose toxicity was studied using rats. HA-pNIPAM nanogels at a 4.88% grafting degree showed reversible thermo-responsive behavior. All nanogel formulations could significantly increase AA water solubility and the stability was higher in nanogels prepared with high polymer concentrations over 180 days. The cell culture study showed that 12.5 µM AA in nanogel formulations was considered non-toxic to the L-929 cells; however, a dose-dependent cytotoxic effect was observed at higher AA-loaded concentrations. In vivo study proved the non-toxic effect of AA loaded in HA-pNIPAM nanogels compared with the control. Taken together, HA-pNIPAM nanogel is a promising biocompatible delivery system both in vitro and in vivo for hydrophobic AA molecules. View Full-Text
Keywords: asiatic acid; hyaluronic acid; poly(N-isopropylacrylamide); thermoresponsive nanogel; stability study; cytotoxicity study; in vivo animal study asiatic acid; hyaluronic acid; poly(N-isopropylacrylamide); thermoresponsive nanogel; stability study; cytotoxicity study; in vivo animal study
►▼ Show Figures 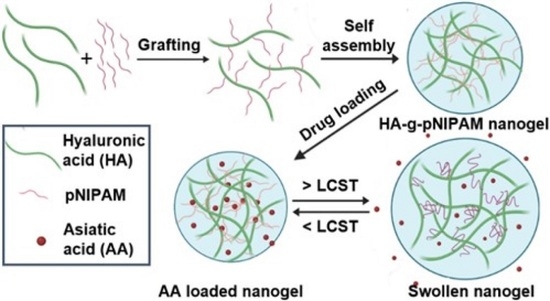