Biocompatible and biodegradable poly-l-lactic acid (PLLA) processed into piezoelectric structures has good potential for use in medical applications, particularly for promoting cellular growth during electrostimulation. Significant advantages like closer contacts between cells and films are predicted when their surfaces are modified to make them more hydrophilic. However, there is an open question about whether the surface modification will affect the degradation process and how the films will be changed as a result. For the first time, we demonstrate that improving the polymer surface’s wettability affects the position of enzyme-driven degradation. Although it is generally considered that proteinase K degrades only the polymer surface, we observed the enzyme’s ability to induce both surface and bulk degradation. In hydrophilic films, degradation occurs at the surface, inducing surface erosion, while for hydrophobic films, it is located inside the films, inducing bulk erosion. Accordingly, changes in the structural, morphological, mechanical, thermal and wetting properties of the film resulting from degradation vary, depending on the film’s wettability. Most importantly, the degradation is gradual, so the mechanical and piezoelectric properties are retained during the degradation. View Full-Text
Keywords: poly-l-lactic acid; enzymatically catalyzed degradation; piezoelectricity; bulk erosion; surface erosion poly-l-lactic acid; enzymatically catalyzed degradation; piezoelectricity; bulk erosion; surface erosion
►▼ Show Figures 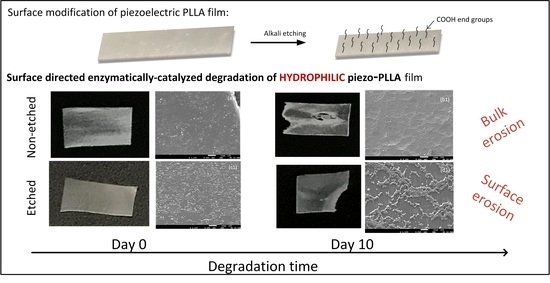