:
Biodegradable composite nanofibers were electrospun from poly(ε-caprolactone) (PCL) and poly(ethylene oxide) (PEO) mixtures dissolved in acetic and formic acids. The variation of PCL:PEO concentration in the polymer blend, from 5:95 to 75:25, revealed the tunability of the hydrolytic stability and mechanical properties of the nanofibrous mats. The degradation rate of PCL/PEO nanofibers can be increased compared to pure PCL, and the mechanical properties can be improved compared to pure PEO. Although PCL and PEO have been previously reported as immiscible, the electrospinning into nanofibers having restricted dimensions (250–450 nm) led to a microscopically mixed PCL/PEO blend. However, the hydrolytic stability and tensile tests revealed the segregation of PCL into few-nanometers-thin fibrils in the PEO matrix of each nanofiber. A synergy phenomenon of increased stiffness appeared for the high concentration of PCL in PCL/PEO nanofibrous mats. The pure PCL and PEO mats had a Young’s modulus of about 12 MPa, but the mats made of high concentration PCL in PCL/PEO solution exhibited 2.5-fold higher values. The increase in the PEO content led to faster degradation of mats in water and up to a 20-fold decrease in the nanofibers’ ductility. The surface of the PCL/PEO nanofibers was functionalized by an amine plasma polymer thin film that is known to increase the hydrophilicity and attach proteins efficiently to the surface. The combination of different PCL/PEO blends and amine plasma polymer coating enabled us to tune the surface functionality, the hydrolytic stability, and the mechanical properties of biodegradable nanofibrous mats.
Keywords:
polymer fibers; thin films; plasma enhanced CVD; mechanical properties; SEM 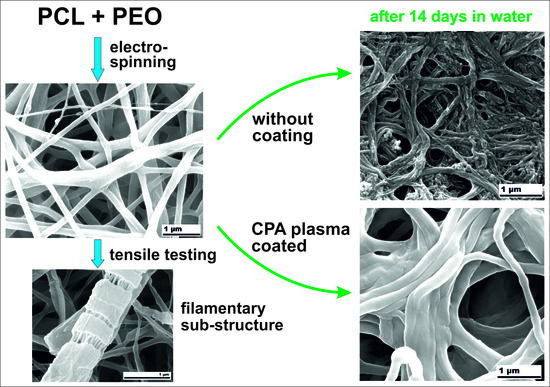 The artificial spinning of fibers is an essential part of current bioinspired technologies. It benefits from the progress in a variety of methods, including wet-spinning, dry-spinning, electrospinning, microfluidic spinning, direct drawing, and direct writing [1]. Electrospinning can be used to produce mats of single-component polymer fibers with sub-micrometer diameters or prepare different types of composites [2,3,4]. The mats provide a large specific surface area, high porosity, and good pore interconnectivity [5]. The morphology of electrospun mats is very similar to the structure of the natural extracellular matrix that supports cell attachment and proliferation. Thus, polymeric nanofibers made of biocompatible and biodegradable polymers attracted remarkable attention due to their potential use in tissue engineering as temporary templates for cell seeding, migration, proliferation, and differentiation [2,6,7,8,9,10]. The mats can also serve in advanced drug delivery systems [5,8] and many other applications [1,5,6,11].
Electrospinning is fast developing along two directions to increase its capability of treating polymers. One is the development of multifluid processes such as coaxial [12] and modified coaxial [13], triaxial [14] and modified triaxial [15], side-by-side [16], and other complicated processes [17]. These processes improve the capability of electrospinning in creating complex nanostructures such as core-shell [18], Janus [19], tri-layer core-shell [20], and other complicated structures [21]. The other is the combination of electrospinning with other material treatment methods to endow the electrospun nanofibers improved properties or functional performances [22].
Different natural and synthetic polymers have been used as manufacturing materials for the electrospinning of nanofibers [1,5,6]. Synthetic biodegradable polymers offer easier processability for electrospinning and more controllable nanofibrous morphology than natural polymers [23]. The reason is that manufacturing of synthetic polymers is reproducible in providing similar molecular weight and polydispersity whereas these parameters may differ in each batch of natural polymers [24] and it significantly affects the properties of the solution for electrospinning. A frequently electrospun synthetic biodegradable polymer is polycaprolactone (PCL) [1,6,10,25]. It possesses good mechanical properties and long-term stability from a few months up to 3 years in vivo [26,27]. However, its hydrophobic nature limits the usage in a predominantly hydrophilic bio-environment of drug delivery and tissue engineering applications. Therefore, its modification either by controlling surface potential [28], or with hydrophilic synthetic and biopolymers opens new horizons for bioapplications [29,30,31]. The modifications can be performed either by grafting hydrophilic moieties onto PCL [32,33,34,35] or by the use of amphiphilic blends, e.g., with gelatin or poly(ethylene oxide) (PEO) [30,31,32,33,34,35,36,37,38,39,40].
The PEO is well-known to suppress protein adhesion [41] and thus could be applied as an anti-inflammatory polymeric coating for implantable biomaterials and devices [42]. Both PCL and PEO are extensively studied polymers for electrospinning due to their biocompatibility and biodegradability [43,44,45,46]. Several publications utilized PCL and PEO polymers as amphiphilic nanofiber substrates [31,35,47,48,49,50]. The studies have shown auspicious properties, such as very good biocompatibility [36], tunable drug release profiles [29], and the differentiation of mesenchymal stem cells on the nanofiber substrates [50].
A simple and efficient method for the modification of nanofibrous mats is their plasma processing. The nanofibers can be coated by plasma polymers containing desired functional groups such as carboxyls, anhydrides or amines without affecting their bulk properties [51,52,53]. Such plasma polymer coatings make the PCL mats less hydrophobic [54], and the functional groups can be beneficially used to attach drugs and immobilize proteins [53,55].
The PCL/PEO nanofibers are routinely processed from their solution in toxic solvents such as chloroform, dimethylformamide, tetrahydrofuran or 1,1,1,3,3,3-hexafluoro-2-propanol [56,57,58]. Although no harmful effects have been observed, these chemicals should be preferentially replaced by less or rather non-toxic solvents [59]. In this work, we processed nanofibers from PCL, PEO and their blends in different ratios using acetic and formic acids solvents. The mats were electrospun from wired electrode because this type of technology has a much higher production yield compared to commonly employed syringe electrospinning processes. The PCL/PEO nanofibers exhibited filamentary sub-structures, but the segregation of the immiscible PCL and PEO polymers into larger domains was excluded by the material characterization. It was concluded that PCL and PEO created mixed interpenetrating networks at the nanometer scale and the synergy of the PCL and PEO blend led to a significantly increased Young’s modulus compared to pure PCL or PEO mats. The bioactive and hydrophilic amine plasma polymer coating on the PCL/PEO mats modified the hydrolytic stability and the mechanical properties. Thus, the PCL/PEO electrospinning and plasma processing of nanofibers can be combined to tune the functional properties of nanofibrous mats.

The PCL/PEO blend nanofibers with varied PCL:PEO ratios from 5:95 to 75:25 were successfully processed into the electrospun mats and further coated by amine plasma polymer that can provide increased hydrophilicity and surface functionality for the attachment of additional compounds. The filamentary structure of each nanofiber was disclosed by SEM after hydrolytic degradation, and tensile tests carried out on the PCL/PEO mats with a high concentration of PEO. Based on the XPS and DSC, we concluded that the filamentary sub-structures of segregated PCL and PEO are organized at the nanometer scale. The DSC also proved the semicrystalline nature of the nanofibers.
The varied PCL:PEO concentrations in the polymer solutions tuned continuously dissolution of the PCL/PEO electrospun mats. The degradation rate of PCL/PEO nanofibers was increased compared to pure PCL, and the mass loss was slightly lower than expected from the PCL and PEO concentrations in the electrospinning mixture. An exciting synergistic phenomenon of increased stiffness appeared for the high concentration of PCL in the PCL/PEO nanofibrous mats. The pure PCL and PEO mats had a Young’s modulus of about 12 MPa, but the mats made of high concentration PCL in PCL/PEO solution exhibited 2.5-fold higher values. The increase in the PEO content led to up to a 20-fold decrease in the nanofibers’ ductility. The amine plasma polymer coating significantly increased the water stability of the nanofibers in water. The plasma processing of mats significantly enhanced the mat stiffness for 5–50 wt.% of PCL in the PCL/PEO blend. Contrarily, a decrease was observed in the stress and strain at fracture. These trends can be attributed to an increased polymer cross-linking that increases the polymer stiffness, but decreases its ductility.
In conclusion, the synergy effects in the mats composed of PCL, PEO and amine plasma polymer coating enable us to tune the surface functionality, the hydrolytic stability, and the mechanical properties of the biodegradable nanofibrous mats. Such materials can be utilized for applications in wound healing and tissue engineering, or as models in accelerated drug and cosmetics testing. An adjustable degradation rate of PCL/PEO, together with improved mechanical properties expected for a given PCL/PEO ratio, can be advantageous for special applications such as smart drug delivery systems or wound healing.

The following are available online at https://www.mdpi.com/2073-4360/12/6/1403/s1, Figure S1. Fitting of high-resolution XPS C1s signal for pure PCL and PEO mats by Gaussian-Lorentzian peaks assigned to different carbon chemical environment (given in the figure caption), Figure S2. Average diameter of electrospun PCL nanofibers in dependence on applied voltage for three different concentrations of PCL in solution. Error bars represent standard deviations of the mean diameter, Figure S3. DSC thermographs for all PCL/PEO mats: A) and C) show the first heating with a single melting peak of as-prepared (uncoated) and CPA-coated nanofibers, respectively, and B) and D) show the second heating revealing two melting peaks demonstrating two separate polymers in the samples of uncoated and CPA-coated nanofibers, respectively, Figure S4. Stress-strain curves showing tensile properties of uncoated and CPA-coated nanofibrous mats electrospun from high concentration PEO mixtures. The polymer concentration (wt.%) and the composition of the PCL/PEO polymer mixture in the electrospinning solution are given in the figure captions, Figure S5. SEM micrographs of CPA-coated nanofibrous mats after tensile test showing the character of the breaking area, A) pure PCL 9 wt.%, B) PCL75/PEO25 9 wt.%, C) PCL50/PEO50 11 wt.%, D) PCL10/PEO90 11 wt.%, Table S1. Crystallinity obtained from the DSC thermographs during the first heating of the uncoated and PP-CPA coated PCL/PEO electrospun mats.

The datasets generated or analyzed during the current study are available from the corresponding author on reasonable request. 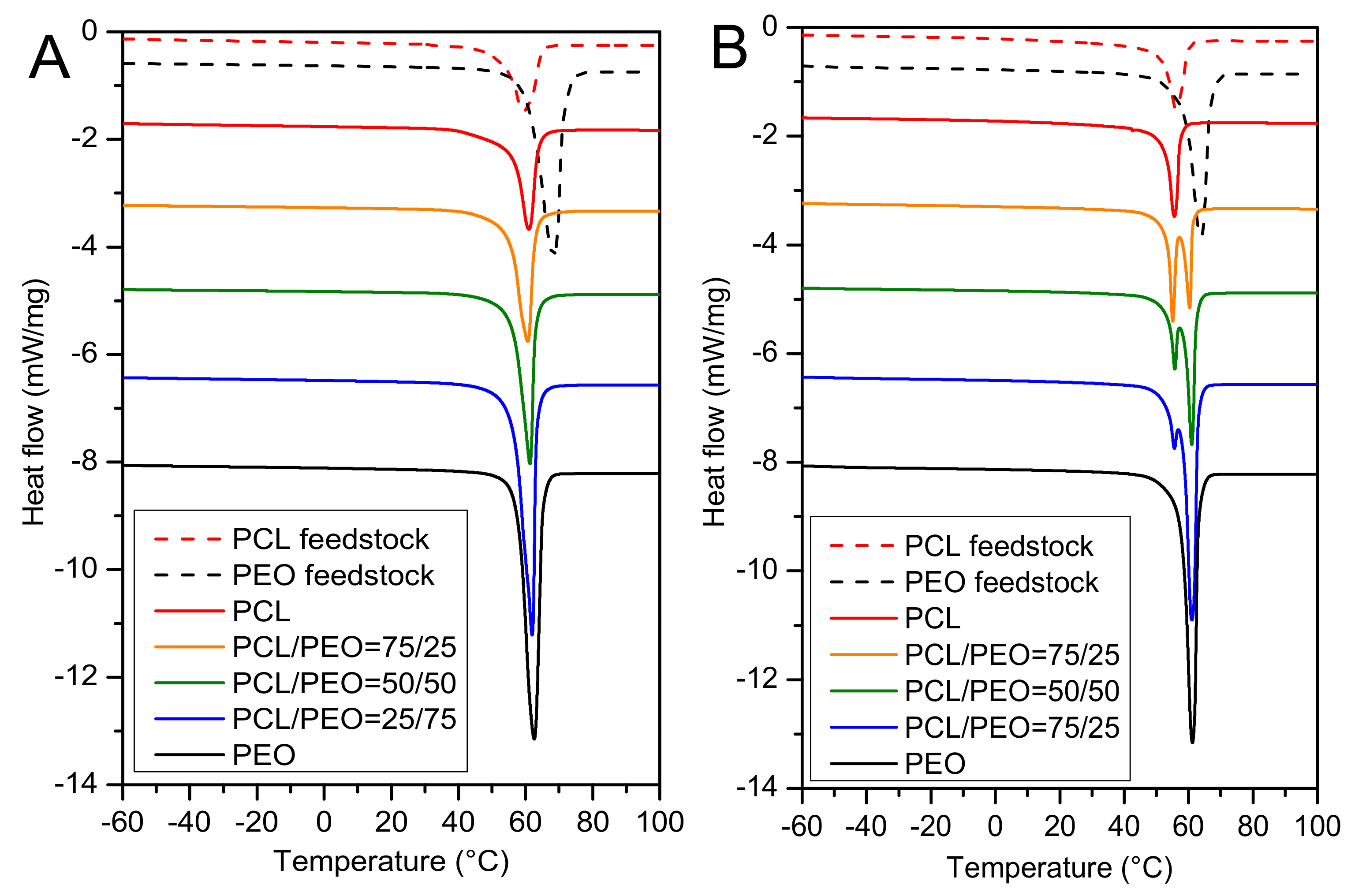 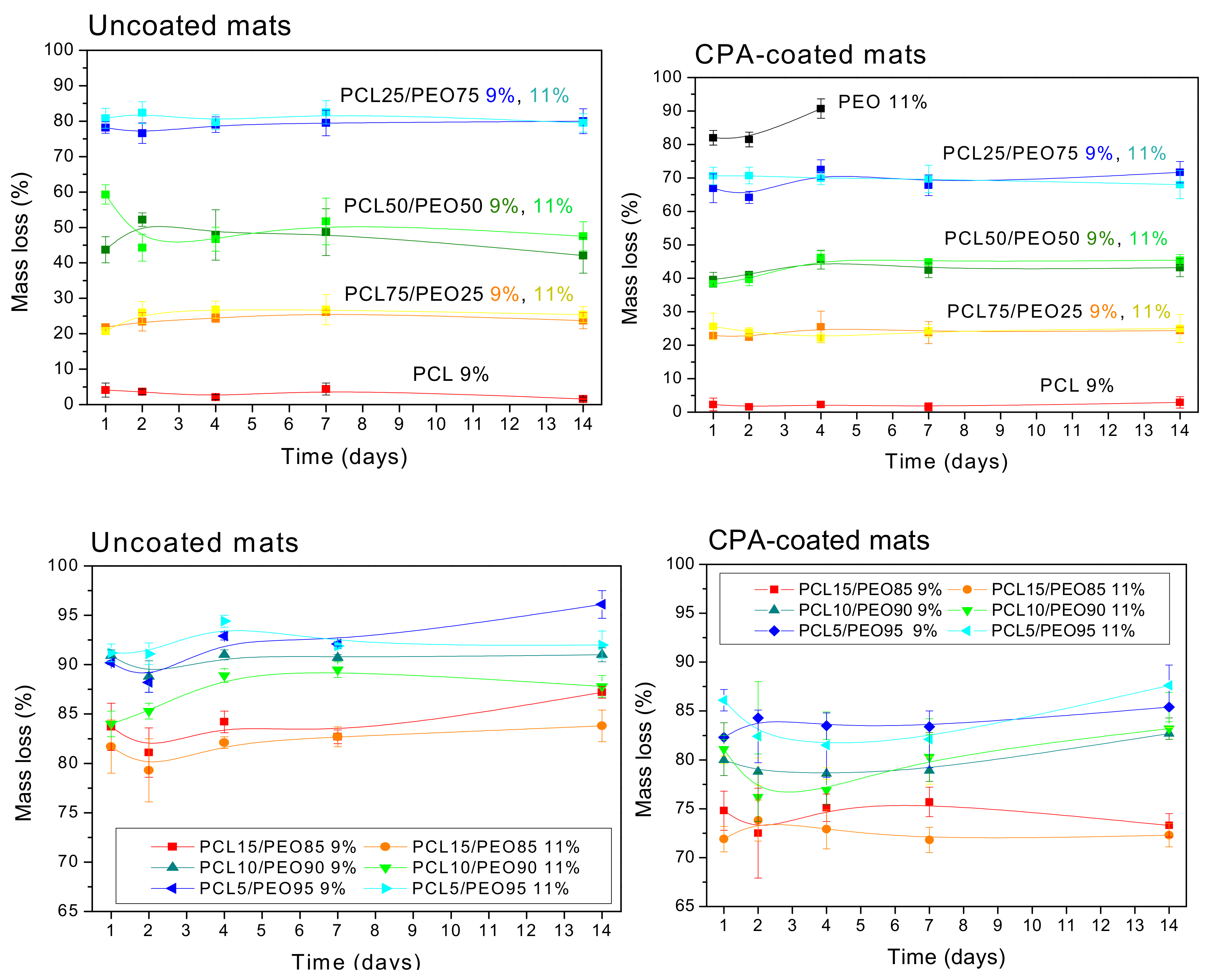 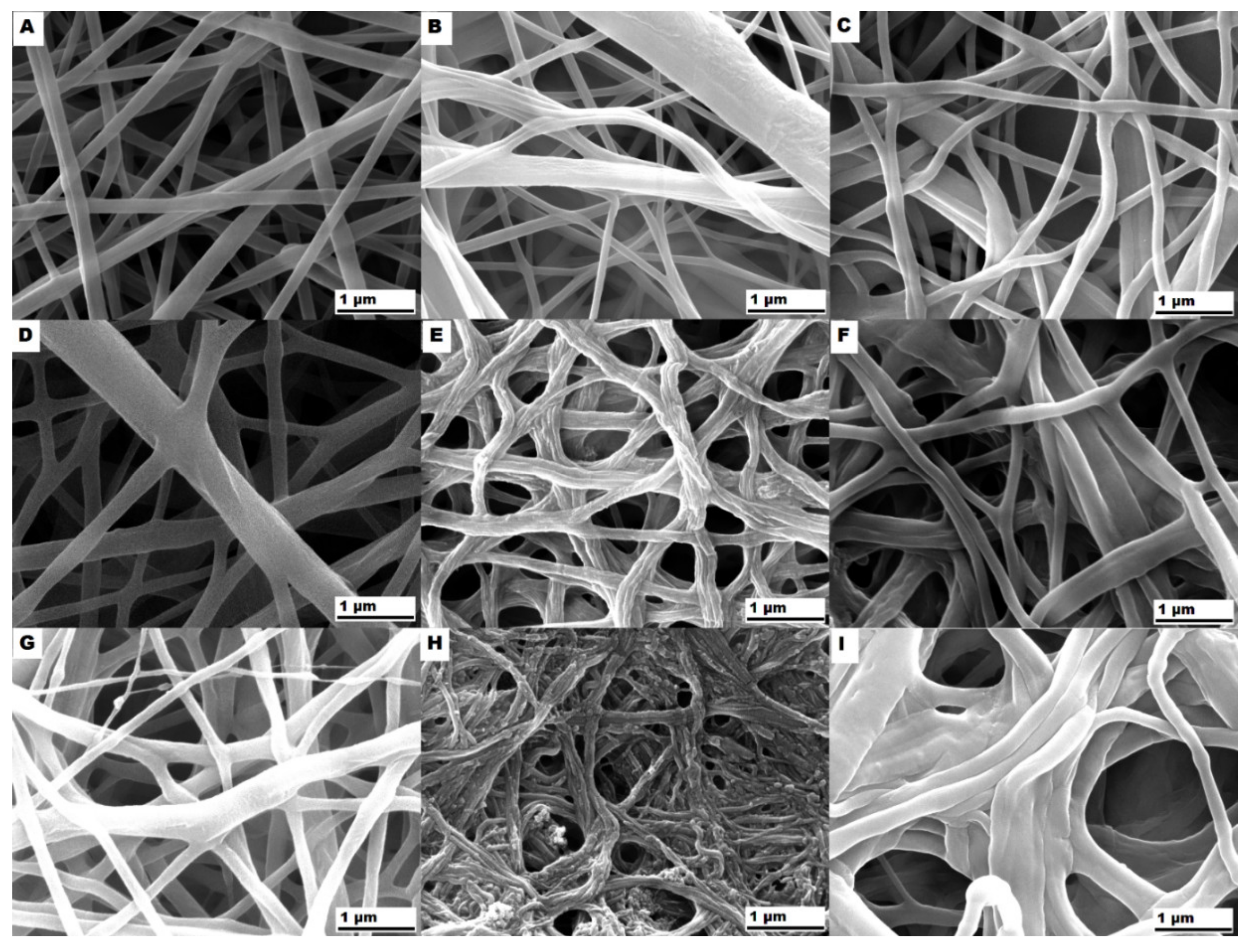 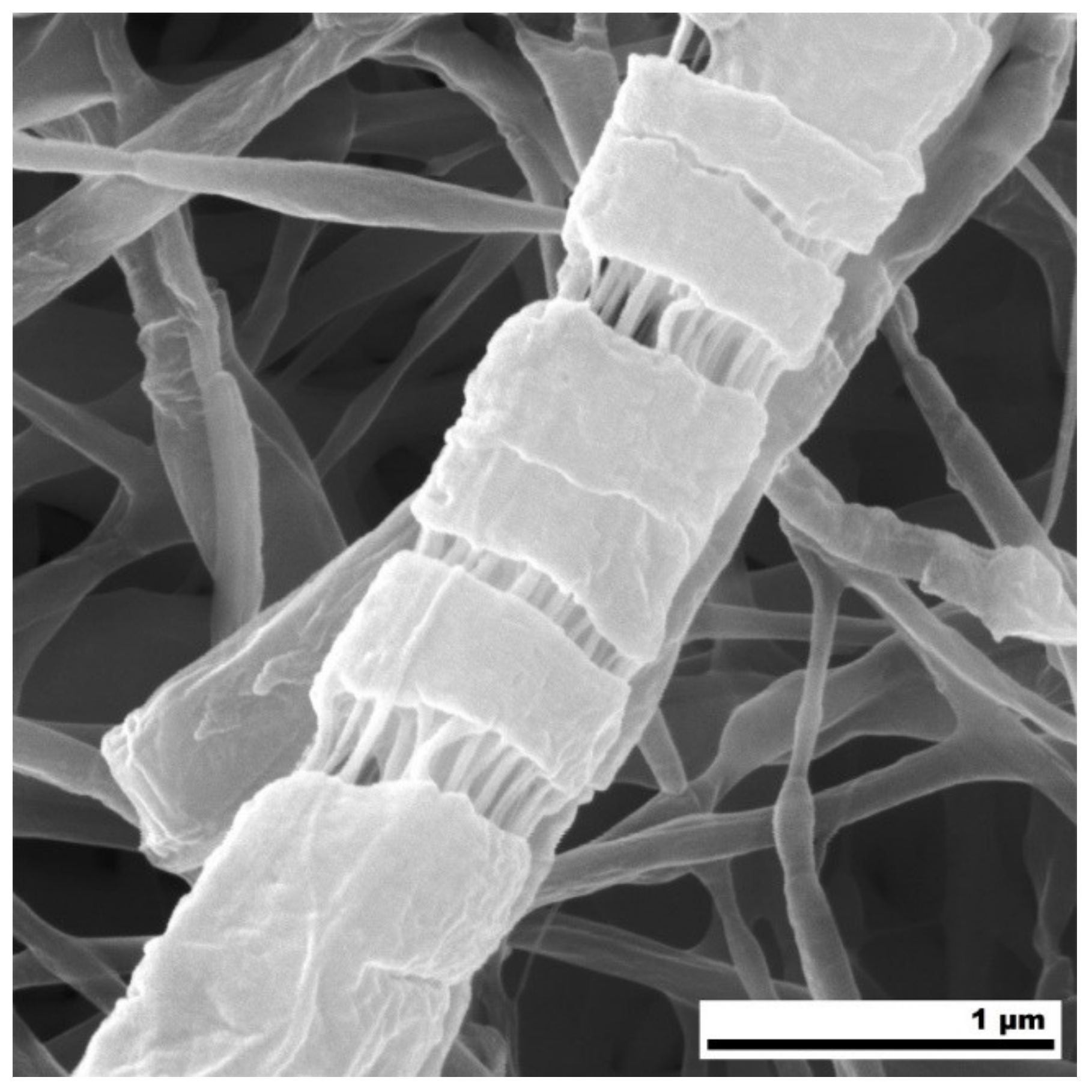