Novel interpenetrating polymer networks (IPNs) were synthesized from N-isopropylacrylamide (NIPAM) and polysiloxanes containing a urea or thiourea side group, in addition to the silanol residue, through two reactions, such as the radical gelation of NIPAM and the condensation of silanols to form a siloxane linkage. The obtained IPNs showed a typical temperature-responsive volume change in water based on the constructed poly-NIPAM gel component. In addition, the characteristic color and volume changes responding to chemical stimuli, such as acetate and/or fluoride ions, based on the introduced urea and thiourea groups onto the polysiloxane gel were observed in N,N-dimethylformamide. View Full-Text
Keywords: polysiloxane; poly(N-isopropylacrylamide); interpenetrating polymer networks; swelling property; anion sensing polysiloxane; poly(N-isopropylacrylamide); interpenetrating polymer networks; swelling property; anion sensing
►▼ Show Figures 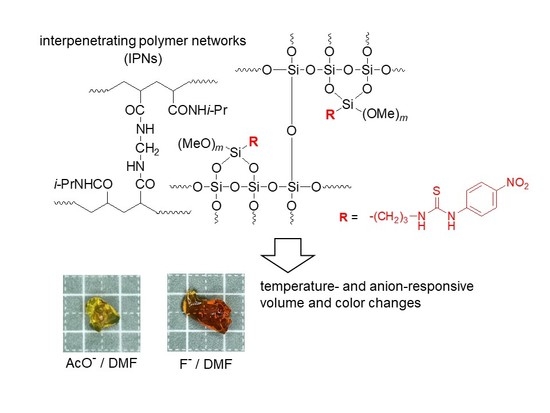