We developed a new format for liquid crystal (LC)-based multi-microfluidic immunoassays, hosted on a polydimethylsiloxane substrate. In this design, the orientations of the LCs were strongly affected by the interface between the four microchannel walls and surrounding LCs. When the alignment layer was coated inside a microchannel, the LCs oriented homeotropically and appeared dark under crossed polarizers. After antigens bound to the immobilized antibodies on the alignment layer were coated onto the channel walls, the light intensity of the LC molecules changed from dark to bright because of disruption of the LCs. By employing pressure-driven flow, binding of the antigen/antibody could be detected by optical signals in a sequential order. The multi-microfluidic LC biosensor was tested by detecting bovine serum albumin (BSA) and an immunocomplex of BSA antigen/antibody pairs, a protein standard commonly used in labs. We show that this multi-microfluidic immunoassay was able to detect BSA and antigen/antibody BSA pairs with a naked-eye detection limitation of −0.01 µg/mL. Based on this new immunoassay design, a simple and robust device for LC-based label-free microfluidic immunodetection was demonstrated.
Keywords: polydimethylsiloxane; microfluidic; bovine serum albumin polydimethylsiloxane; microfluidic; bovine serum albumin

Microfluidic immunoassays based on polydimethylsiloxane (PDMS) substrates possess several advantages such as short assay times, small volumes, and low costs [1,2]. However, a microfluidic immunoassay needs a special signal detection method and enhancement technique such as fluorescence detection or enzymatic reaction enhancement method, since the miniature size of microfluidic devices reduces the signal. Thus, antibody/antigen pairs in microfluidic devices are usually conjugated with labels like enzymes [3,4], fluorophores [5,6], nanoparticles [7,8], and so on, in order to transduce the immunobinding response into detectable signals. In addition, the biofunctionality of antibody/antigen pairs is affected upon conjugation with labels [9,10].
Recently, liquid crystals (LCs) were successfully used for label-free biodetection [11]. It was reported that the reorientation of LCs caused the immunobinding response to be more sensitive and changed the optical signals of LCs [12,13]. In addition, a protein standard, bovine serum albumin (BSA), was successfully detected using LC materials [14,15]. Such changes in the optical properties of LCs enable unique optical properties such as Bragg reflection, flexibility, and bi-stability [16,17,18,19,20,21]. In addition, the first cholesteric LC (CLC) biosensing device was proposed by Hsiao et al. in 2015 [22]. A highly sensitive color-indicating CLC biosensor was invented. However, it is unfortunate that CLC biosensors require complicated fabrication processes. In addition, LC biosensors must be confined in a well-defined space for biosensing applications such as in a cell device [23] or transmission electron microscopic (TEM) grid [24]. In addition, assembly of these LC devices requires additional complicated steps, which are time-consuming. Currently, these issues are the main obstacles to applying LC biosensors in practice. In addition, Chen et al. invented the first single-substrate CLC biosensing device [25]. It seems that a better way to resolve time-consuming detection by LC biosensors can be found.
Based on the problems mentioned above, we planned to take advantage of the fluidic property of LC materials, as well as propose an LC-based multi-microfluidic immunoassay to detect BSA antigen/antibody pairs. However, some efforts were proposed for integrating LC materials into microfluidic devices. The first LC/PDMS film to detect ethanol in microfluidic devices was recently proposed [26]. The device enables monitoring of ethanol production. However, this device is only applicable for detecting organic molecules. In addition, Liu et al. revealed an LC microfluidic-filled metal grid for detecting detergents and enzymes [27]. Thus, real-time monitoring by an LC microfluidic device has been achieved.
In this study, we developed an LC-based multi-microfluidic immunoassay chip. We show the behavior between BSA antigen/antibody pairs and LC molecules in a PDMS microchannel. We show that this device substantially differs from a typical optical cell. Since the LC molecules within a microchannel are in contact with the four alignment-coated channel walls, the orientations of the LCs are determined by both the surface functionality and the geometric dimensions of the channels. Antigens/antibodies can be detected by observing the optical appearance of LCs inside the microchannel under crossed polarizers. A highly sensitive interface between LC molecules and an alignment layer of N,N-dimethyl-n-octadecyl-3-aminopropyltrimethoxysilyl chloride (DMOAP) was employed to detect BSA concentrations. The schematic of this multi-microfluidic LC/PDMS biosensor is shown in Figure 1.

Single-layer and two-level cascaded microchannels were fabricated by a general PDMS-based soft lithographic fabrication process. First, a microchannel mold was fabricated on a 4-inch (10.16-cm) silicon wafer by standard photolithography using SU-8 2025 photoresist. The thickness of the mold was 25 μm. Then the PDMS base and curing agent were mixed in a 10:1 weight ratio. After allowing 30 min for degassing, the mixture was poured into the master. After baking at 65 °C for 4 h, the cured PDMS microchannel was peeled off the master. Using oxygen plasma treatment, the PDMS microchannel and a pre-cleaned glass substrate were tightly bonded together. The LC mixture used in this study was nematic E44. In addition, the multi-microfluidic channels were immersed in the DMOAP aqueous solution for 30 min to coat the aligned layer onto the inner walls of the microfluidic channel. Next, the multi-microfluidic device was rinsed with deionized water for 1 min in order to remove excess DMOAP solution. For test immobilization, BSA in the form of an aqueous solution was filled into the DMOAP-coated microfluidic channel. In addition, BSA concentrations of 1 and 0.1 mg/mL, and 10, 1, 0.1, and 0.01 µg/mL were used. Concentrations of an anti-BSA antibody of 0, 1, 10, and 100 µg/mL were also used. The empty microfluidic channel was filled with LC under volume flow rates of 5, 10, 20, and 30 µL/min through a syringe to form LC multi-microfluidic chips. A BX51 polarized optical microscope (POM; Olympus, Tokyo, Japan) equipped with a halogen light bulb as the light source was used in this study for observation. All experimental data were acquired at 26 ± 1 °C.

3.4. Comparisons to Other Label-Free Biosensing Techniques

Moreover, many label-free biosensing techniques were proposed in the past. The most important and commonly used techniques are grating coupled interferometry (GCI) and plasmonic sensing [30,31,32,33]. The problem with both GCI and plasmonic sensors is that the measurement process is complicated. In addition, both of these sensing devices are expensive and require large equipment, which is not portable or easy to use. Compared to both label-free plasmonic and GCI techniques, our LC microfluidic device is cheaper and can be measured with a smartphone [34] or detailed spectrum. Compared to the well-known immunodetection method, our multi-microfluidic LC immunoassay chips are cheaper and easier to use. Based on the naked-eye detection property of the label-free nature, this study showed that the LC microfluidic device has potential for development as a cheap, sensitive, and portable biosensing technique for immunodetection.

A novel design of LC-based multi-microfluidic immunoassay chips was proposed. The orientation of the LCs was strongly influenced by the interface between the four channel walls and surrounding LC molecules. When a DMOAP alignment layer was coated onto the interior of the microchannel, the LCs oriented homeotropically and appeared dark under crossed polarizers. After the antigens had bound to the immobilized antibodies in the multi-microfluidic device, the appearance of the LC phase changed from dark to bright because of disruption of the LC orientation. Using pressure-driven flow, antigen/antibody binding could be detected by optical signals in a sequential order. The immunodetection limit of BSA antigen/antibody pairs was 0.01 µg/mL BSA and 1 µg/mL of the anti-BSA antibody. We show that this multi-microfluidic LC immunoassay chip is able to detect BSA and antigen/antibody BSA immunocomplexes with label-free immunodetection. This new design of an immunoassay device provides a sensitive, cheap, multi-detection, and robust approach to LC-based immunodetection.

The authors declare that no conflict of interest. 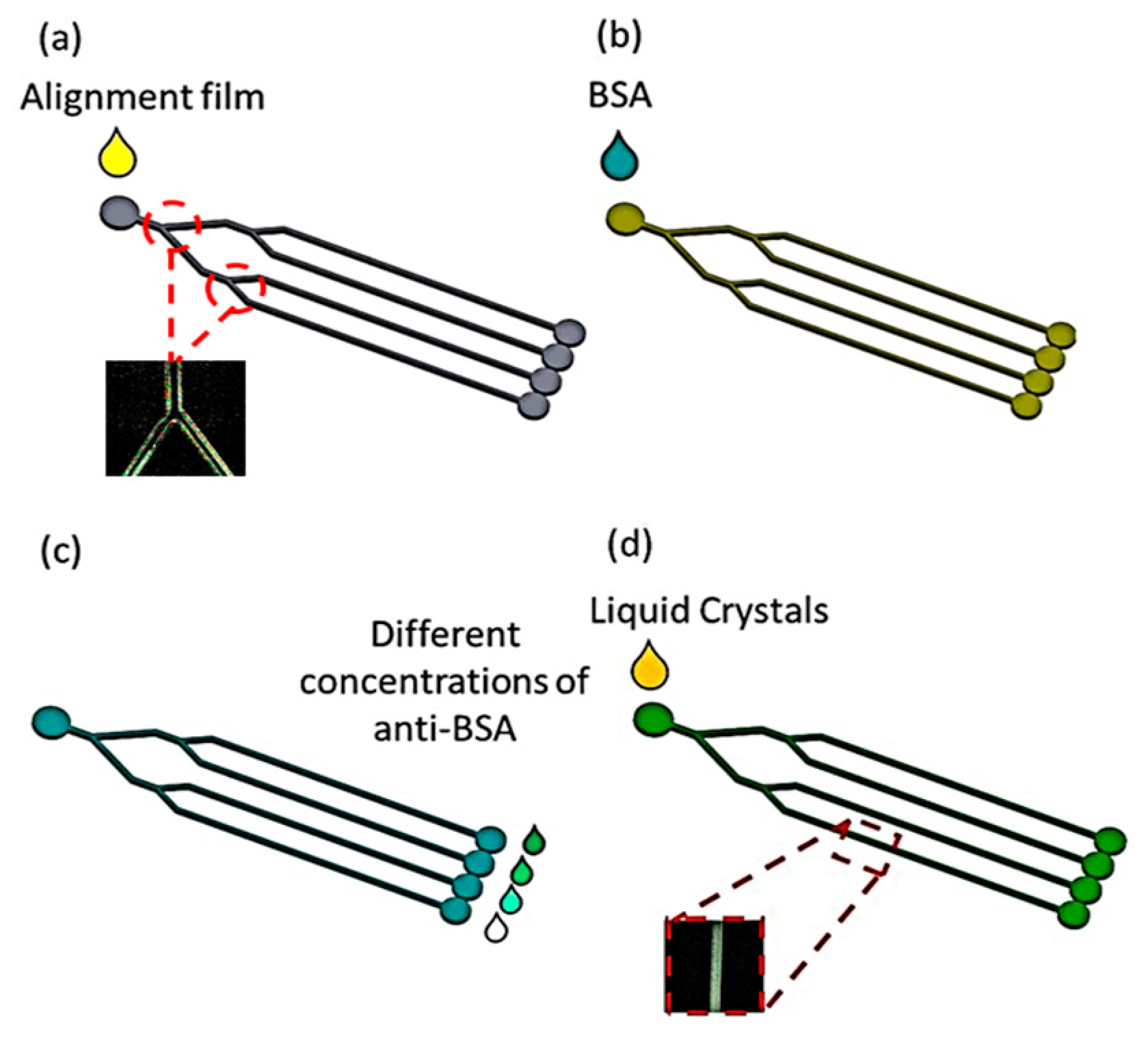 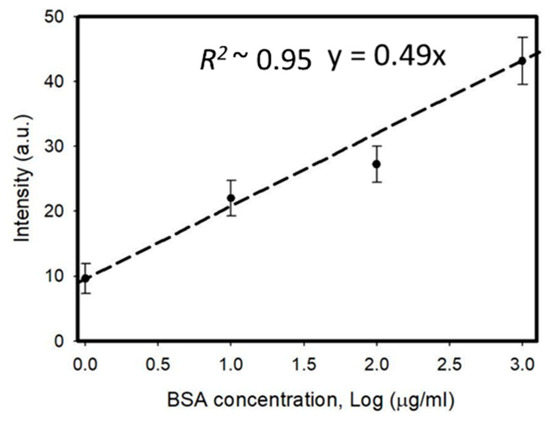 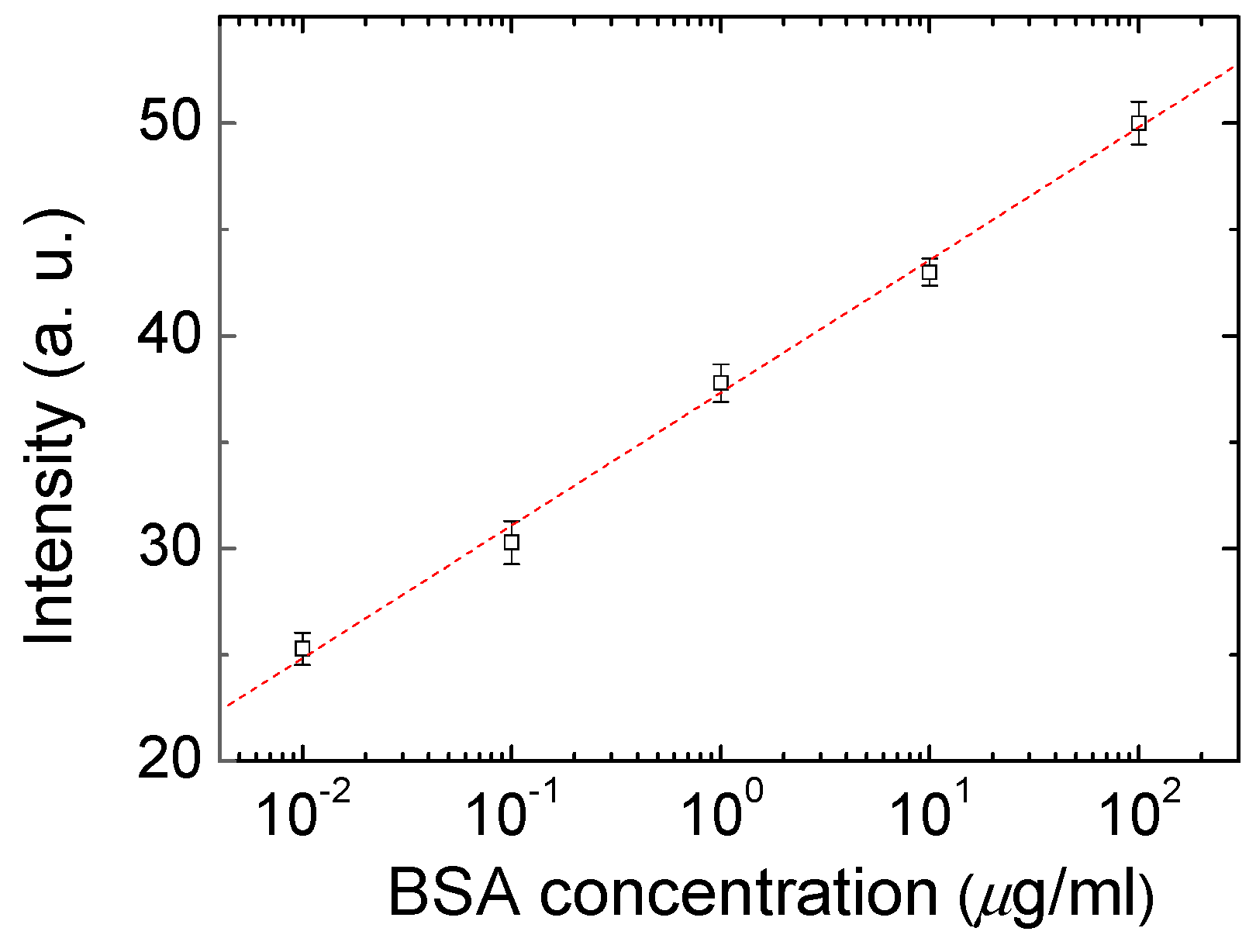