The polyvinyl alcohol (PVA) and neem extract were grafted onto coupled oxides (3ZT-CO) via reflux process to stabilize the particles to form 3ZT-CO/PVA and 3ZT-CO/Neem. These were then incorporated into LLDPE by melt blending process to give LLDPE/3ZT-CO/PVA and LLDPE/3ZT-CO/Neem composites. The Neem and PVA stabilized particles showed high zeta potential and dispersed homogeneously in water. The stabilization process altered the shape of the particles due to plane growth along the (002) polar direction. The stabilizers acted as capping agents and initiated the one-dimensional growth. The alkyl chain groups from PVA increased the polarity of the LLDPE/3ZT-CO/PVA and played a dominant role in the water adsorption process to activate the photocatalytic activity. This was further enhanced by the homogeneous distribution of the particles and low degree of crystallinity (20.87%) of the LLDPE composites. LLDPE/3ZT-CO/PVA exhibited the highest photodegradation (93.95%), which was better than the non-stabilized particles. Therefore, the photocatalytic activity of a polymer composite can be enhanced by grafting PVA and neem onto couple oxides. The LLDPE/3ZT-CO/PVA composite was further used to treat textile effluent. The results showed the composite was able to remove dye color by 93.95% and to reduce biochemical oxygen demand (BOD) and chemical oxygen demand (COD) by 99.99%.
Keywords: photocatalyst; stabilization; polymer composites; surface treatment photocatalyst; stabilization; polymer composites; surface treatment
►▼ Show Figures 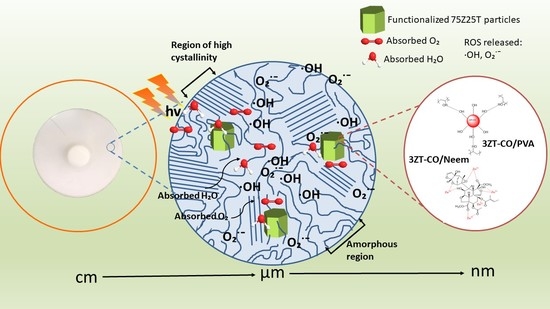