For glycolic acid oligomers (GAO): l-lactic acid oligomers (LAO) mixtures, as an example, it was shown that the nature of the active sites of the catalysts significantly affect the depolymerization process. So, ZnO, which has mainly basic sites, leads to the highest yield of cyclic diesters. On the contrary, depolymerization in the presence of acidic γ-Al2O3 and without a catalyst is characterized by lower diester yields due to the prevalence of a side polycondensation reaction. Using GAO:LAO mixtures, it was shown that in the case of three studied systems (with ZnO, γ-Al2O3, and without catalyst), mixed interactions occurred, including homo-paired and hetero-paired intermolecular interactions, as well as intramolecular interactions of oligomeric molecules. Kinetic models of the processes under study were determined by isoconversional thermal analysis. In the case of depolymerization of oligomers in the presence of ZnO, the kinetic model was between the kinetic models of the first (F1) and second (F2) orders, while in depolymerization in the presence of γ-Al2O3 and without a catalyst, the process was described by diffusion models such as the Jander equation (D3) and Zhuravlev, Lesokin, Tempelman equation (D5). View Full-Text
Keywords: hydroxycarboxylic acid oligomers; depolymerization; metal oxides; cyclic diesters; isoconversional kinetics hydroxycarboxylic acid oligomers; depolymerization; metal oxides; cyclic diesters; isoconversional kinetics
►▼ Show Figures 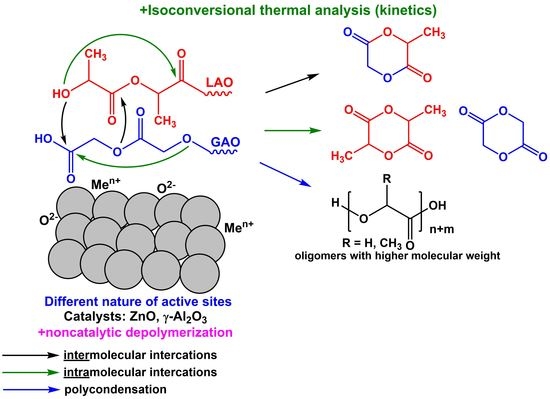