Micellar catalysts with a switchable core are attractive materials in organic synthesis. However, little is known about the role of the shell forming block on the performance of the catalyst. Thermoresponsive block copolymers based on poly(N-isopropylacrylamide-co-vinyl-4,4-dimethylazlactone) attached to different permanently hydrophilic blocks, namely poly(ethylene glycol), poly(N,N-dimethylacrylamide), and poly(2,3-dihydroxypropyl acrylate), were successfully synthesized via reversible addition/fragmentation chain transfer radical polymerization (RAFT). Post-polymerization attachment of an amino-functionalized L-prolineamide using the azlactone ring-opening reaction afforded functionalized thermoresponsive block copolymers. Temperature-induced aggregation of the functionalized block copolymers was studied using dynamic light scattering. It was shown that the chemical structure of the permanently hydrophilic block significantly affected the size of the polymer self-assemblies. The functionalized block copolymers were subjected to an aldol reaction between p-nitrobenzaldehyde and cyclohexanone in water. Upon temperature-induced aggregation, an increase in conversion was observed. The enantioselectivity of the polymer-bound organocatalyst improved with an increasing hydrophilic/hydrophobic interface as a result of the different stability of the polymer aggregates. View Full-Text
Keywords: thermoresponsive block copolymers; azlactone ring-opening; immobilized L-prolineamide; RAFT polymerization; temperature-induced self-assembly; micellar organocatalysis thermoresponsive block copolymers; azlactone ring-opening; immobilized L-prolineamide; RAFT polymerization; temperature-induced self-assembly; micellar organocatalysis
►▼ Show Figures 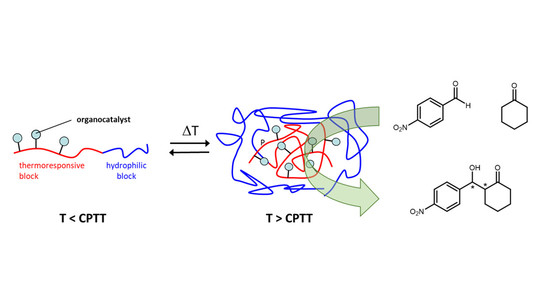