(1S,2S)-Cyclohexane-1,2-diamine-based Organosilane Fibres as a Powerful Tool Against Pathogenic Bacteria

This aims to establish design rules for the influence of complex polymer matrices on the surface properties of small molecules. Here, we consider the dependence of the surface behaviour of some model additives on polymer matrix hydrophobicity. With stoichiometric control over hydrolysis, we generate systematic changes in matrix chemistry from non-polar, hydrophobic PVAc to its hydrolysed and hydrophilic analogue, PVA. With the changing degree of hydrolysis (DH), the behaviour of additives can be switched in terms of compatibility and surface activity. Sorbitol, a polar sugar-alcohol of inherently high surface energy, blooms to the surface of PVAc, forming patchy domains on surfaces. With the increasing DH of the polymer matrix, its surface segregation decreases to the point where sorbitol acts as a homogeneously distributed plasticiser in PVA. Conversely, and despite its low surface energy, octanoic acid (OA) surprisingly causes the increased wettability of PVAc. We attribute these observations to the high compatibility of OA with PVAc and its ability to reorient upon exposure to water, presenting a hydrophilic COOH-rich surface. The surfactant sodium dodecyl sulfate (SDS) does not show such a clear dependence on the matrix and formed wetting layers over a wide range of DH. Interestingly, SDS appears to be most compatible with PVAc at intermediate DH, which is consistent with the amphiphilic nature of both species under these conditions. Thus, we show that the prediction of the segregation is not simple and depends on multiple factors including hydrophobicity, compatibility, blockiness, surface energy, and the mobility of the components. View Full-Text
Keywords: co-polymer films; additives; self-organisation; surface segregation co-polymer films; additives; self-organisation; surface segregation
►▼ Show Figures 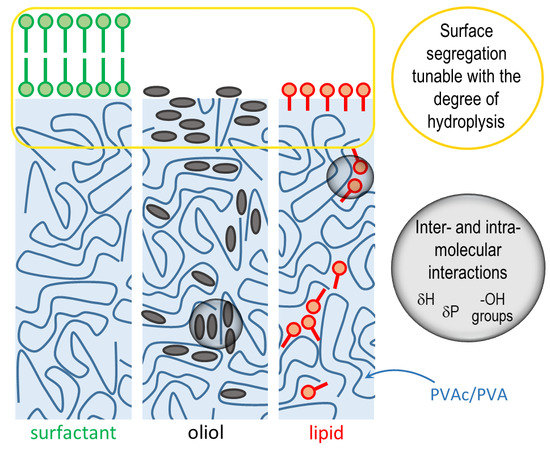