Poly(ethylene oxide) (PEO) is a nontoxic highly crystalline polymer with a glass transition temperature of approximately −50 °C, promising extensive chain flexibility [1]. It can be dissolved in various organic solvents, such as methanol or ethanol, and water, which classifies it as an easily spinnable material. Electrospinning is one of the processing methods enabling the production of micro-, submicro-, and nanofibers from polymer solutions and melts using electric forces [2,3,4]. Electrospinning of PEO solutions at room temperature has been thoroughly investigated, providing many research studies describing PEO nonwoven webs with various fiber sizes and molecular orientations depending on the chosen processing parameters [5,6], solvents [7], and solution properties [8].
PEO often serves as a carrier liquid facilitating the electrospinning process of some polymers, such as chitosan or cellulose [9]. These nanofibrous membranes perform many beneficial properties, including a high pore density and surface area. Therefore, they may be employed in diverse applications, such as tissue scaffold, wound dressing, or antibacterial membranes [9,10]. However, nanofibrous membranes lack mechanical strength, which could be enhanced by introducing interfiber bonding after specific treatments. Generally, a thermal treatment is used to bond the electrospun nanofibers. Thermal treatment of nanofibers to improve the crystallinity and mechanical properties of various polymers, such as poly(vinylidene fluoride), poly(4-methyl-1-pentene), polyester, and PEO, has recently been reported [11,12,13,14]. For instance, Bao et al [14] studied the morphology of PEO nanofibrous membranes either with or without multiwall carbon nanotubes thermally bonded at temperatures ranging from 60 to 64 °C. To the authors’ knowledge, the thermal-induced morphology of pure PEO nanofibers has not been examined yet.
The crystallinity and molecular orientation of electrospun fibers are normally significantly lower if compared with samples prepared by common processing technologies (molding or film casting) [15]. Macroscopic alignment of fibers was gained either by a rotating mandrel collector [1] or by counter-electrode plates’ integration [16,17]. Nonetheless, macroscopic alignment may not always be connected with the orientation on the microscopic level and the degree of crystallinity remains almost the same as without the alignment. The structure’s formation during the electrospinning process is indeed a complex issue. The most critical parameters affecting the crystallization process include the degree of chain orientation/relaxation and the rate of solvent evaporation [18].
Post-processed thermal treatment seems to be the proper technique, leading both to evaporation of the residual solvent and an increase of the crystalline phase [19]. A reduction in the interlamellar distance, also known as lamellar thickening, is typical for this phenomenon. Nevertheless, amorphous and crystalline phase rearrangement can be accompanied with the thermooxidation process in the solid state [20]. If compared to pure hydrocarbon polymers, such as poly(ethylene) and poly(propylene), PEO is more sensitive to thermal oxidation [21]. In this context, scission of the chains during this process also induces morphological changes that can be reflected in the overall degree of crystallinity. Thus, the proper temperature–time condition for post-process thermal treatment should be established and was examined in this paper.

Polyethylene oxide (PEO) of Mw = 300,000 g/mol was purchased from Sigma Aldrich (St. Louis, MO, USA). It was dissolved in distilled water and methanol (9 wt.%). PEO solutions were stirred with a mixing rate of 250 rpm for 48 h using a magnetic stirrer (Heidolph MR Hei-Tec, Schwabach, Germany) with a teflon-coated magnetic cross at 25 °C for water solutions and 35 °C for methanol solutions.

2.2. Characterization of the Solution

A rotational rheometer Physica MCR 501 (Anton Paar, Graz, Austria) with the concentric cylinder arrangement with inner and outer diameters of 26.6 and 28.9 mm, respectively, was used to determine the rheological properties of PEO solutions at 25 °C. Rheological measurements of the polymer solutions were performed in steady (a range of shear rates from 0.01 to 300 s−1) and oscillatory (at a constant strain of 1% and with a frequency ranging from 0.1 to 100 s−1) modes.

Nanofibrous webs were created by the laboratory device [22], which consisted of a high-voltage power supply (Spellman SL70PN150, Hauppauge, NY, USA), carbon-steel stick of a diameter of 10 mm, and motionless flat-metal collector. The electrospinning process was performed from a drop of polymer solution (0.2 mL) placed on the tip of a steel stick at a voltage of 25 kV with the tip-to-collector distance fixed at 200 mm at 20 ± 1 °C with a relative humidity of 38 ± 3%.

In order to avoid any structural transformations of the prepared samples, electrospun webs were cooled to –75 °C (a significantly lower temperature than PEO Tg of –54 °C) immediately after the electrospinning process and stored at this temperature for further experiments. Afterwards, PEO nanofibrous webs were exposed to thermal treatments at various temperatures of 40, 50, and 60 °C for a specified period of time.

Characteristics of nanofibrous webs were evaluated using a Vega 3 high resolution scanning electron microscope (Tescan, Brno, Czech Republic). A conductive coating layer was applied in advance. To determine the mean fiber diameter, Adobe Creative Suite software was used. In total, 300 measurements were executed in three different images.
Crystallinity of the prepared samples was characterized by wide-angle X-ray diffraction (WAXD). Diffractograms were recorded by a Philips diffractometer (XPertPRO, Almelo, The Netherlands) equipped with a hot stage. Measurements were completed in a reflection mode in the 2θ range of 10 to 35° with a nominal resolution of 0.03° at selected temperatures and a quasi-logarithmic sampling frequency. Every test was performed in duplicate to enhance the repeatability.

The experimental results of this study have shown the following conclusions for PEO electrospun fibers:
1. Electrospun PEO fibers processed from methanol solution possess higher diameters compared with fibers obtained from water. It respects the evaporation kinetics of a solvent.
2. PEO fibers prepared from methanol and water solutions by electrospinning are dimensionally stable even during thermal treatment close to their melting temperature.
3. As a consequence of chemi-crystallization, the fiber surface is roughened after a specific period of thermal treatment.
4. Solvent quality positively influences the as-processed crystallinity of PEO electrospun fibers, which is manifested by the higher crystalline portion in fibers prepared from methanol solution.
5. The crystalline phase increment during secondary crystallization is positively impacted by the as-processed crystalline level of PEO electrospun fibers. Similarly, the temperature of the thermal treatment accelerates secondary crystallization in the observed temperature interval.
6. At a prolonged time of thermal treatment at 60 °C, massive thermooxidative degradation of both types of electrospun PEO fibers is manifested by a decrease in crystallinity.

Ministry of Education, Youth and Sports of the Czech Republic: Programme NPU I (LO1504).

The author (P. Peer) wishes to acknowledge the financial assistance of RVO 67985874. The authors (M. Polaskova, R. Cermak, P. Ponizil) are grateful for the support of the Ministry of Education, Youth and Sports of the Czech Republic, under Programme NPU I (LO1504). 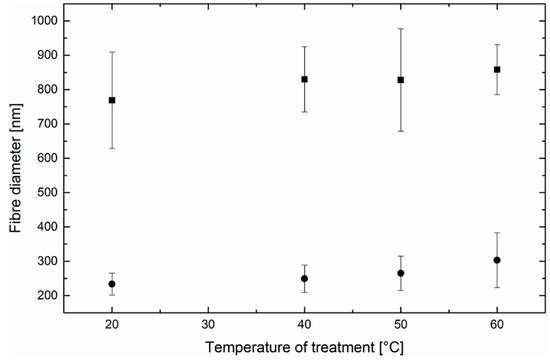 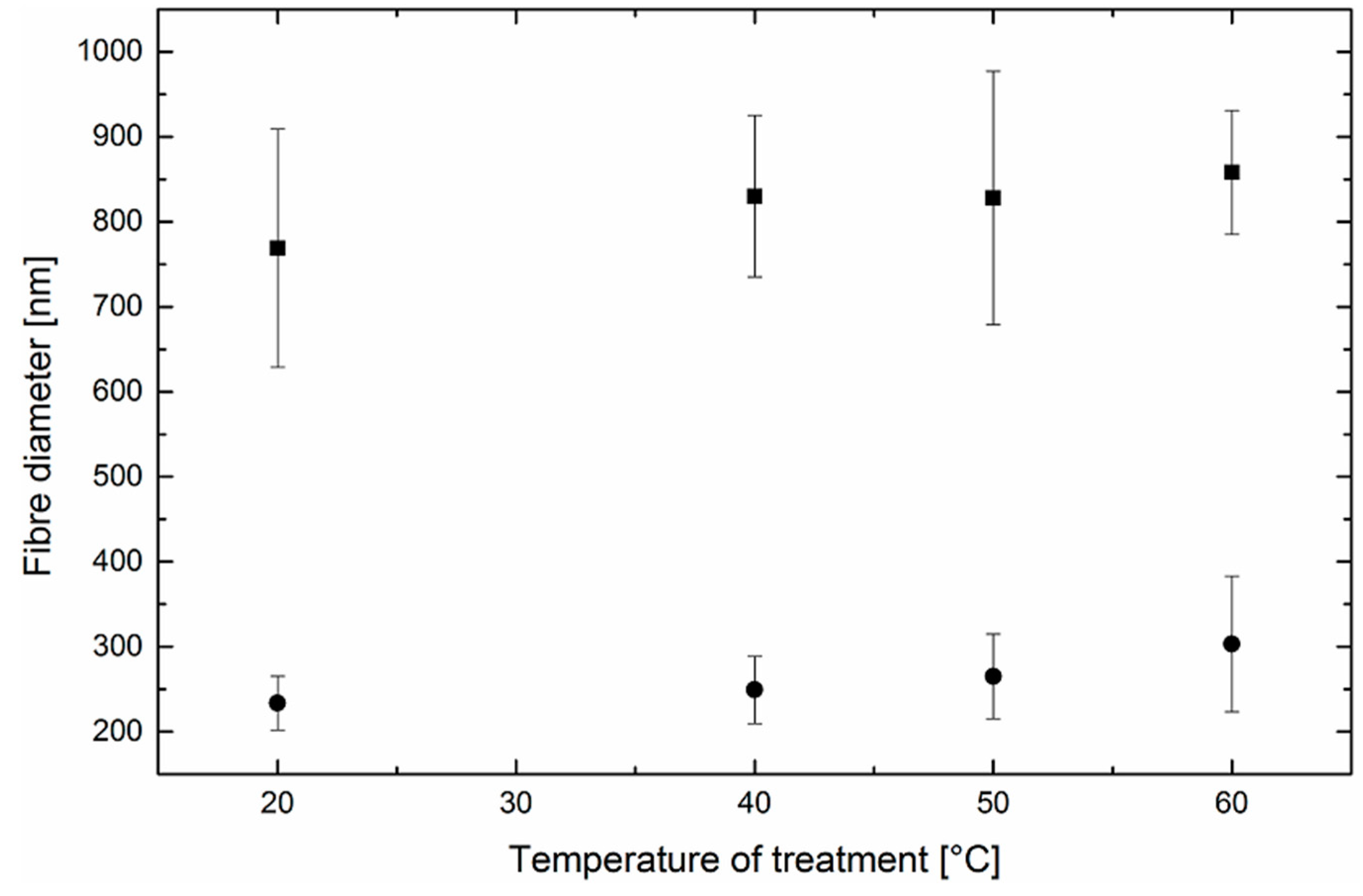 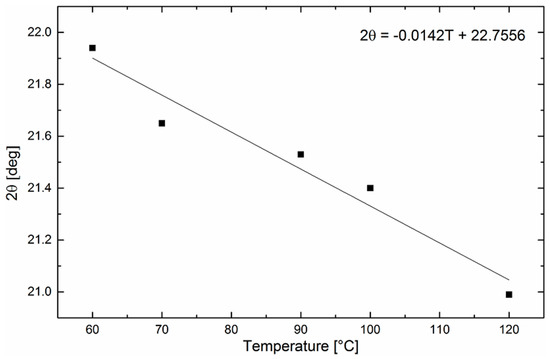 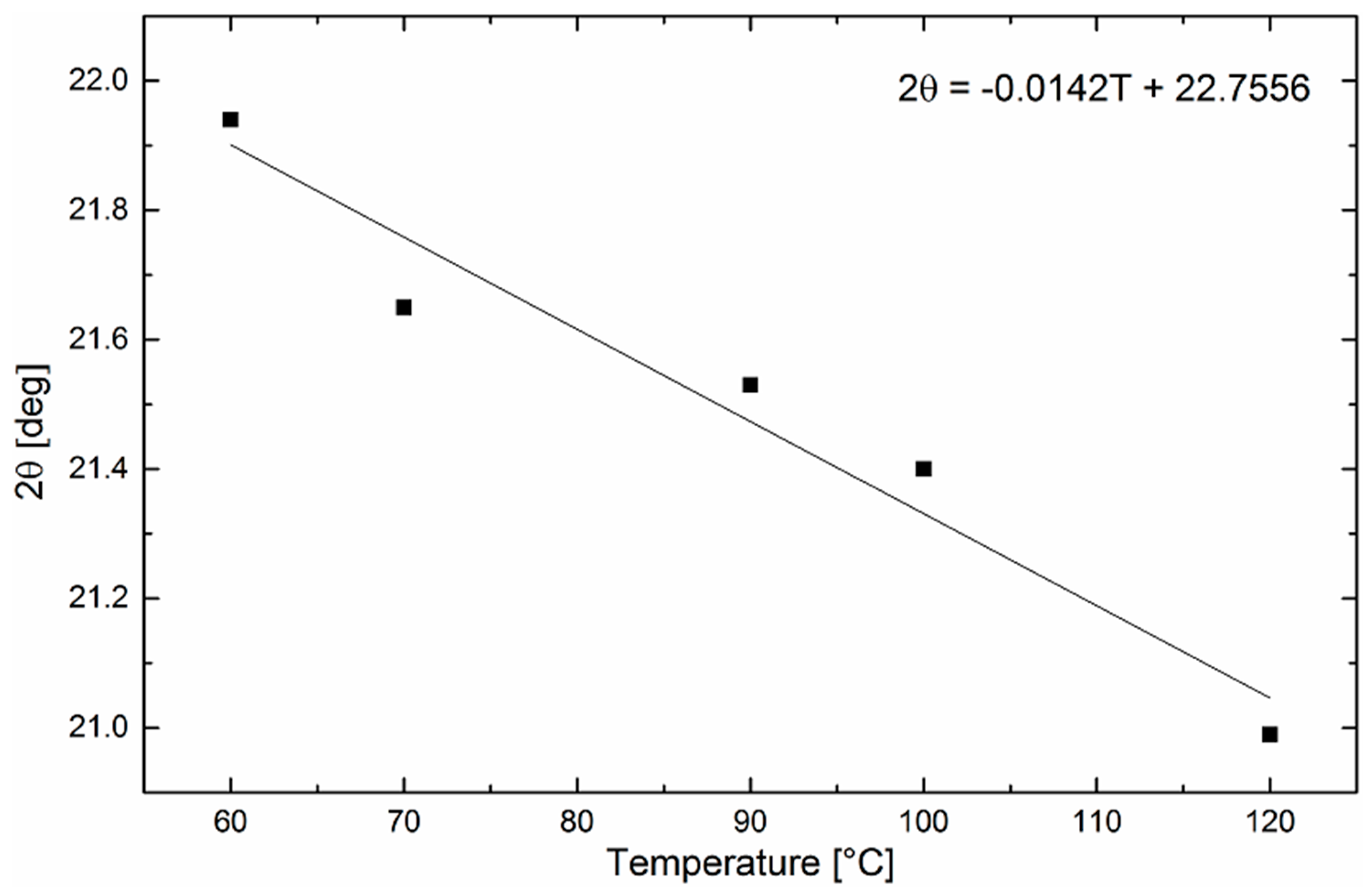 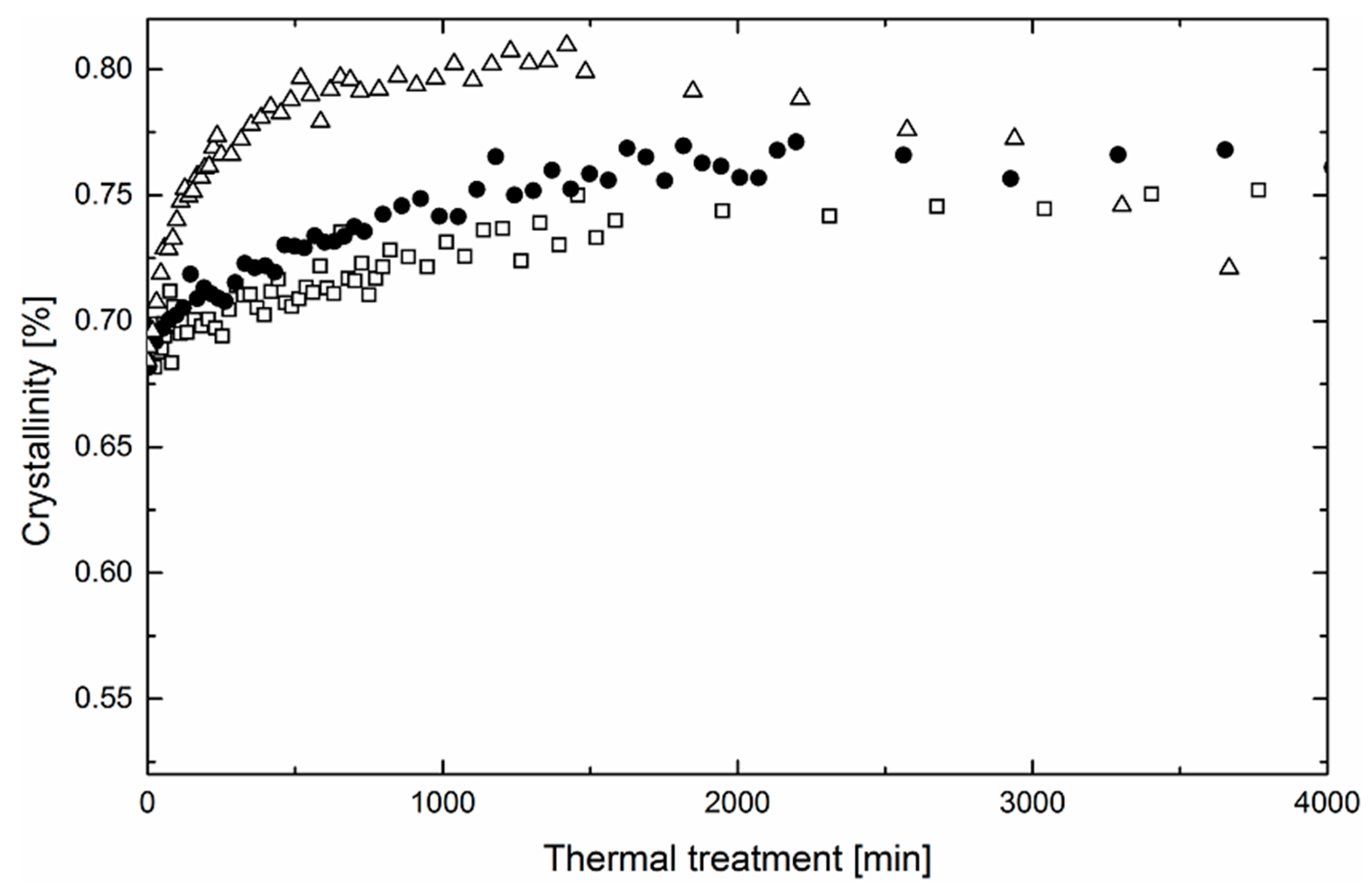