Lamella-forming ABC triblock terpolymers are convenient building blocks for the synthesis of soft Janus nanoparticles (JNPs) by crosslinking the B domain that is “sandwiched” between A and C lamellae. Despite thorough synthetic variation of the B fraction to control the geometry of the sandwiched microphase, so far only Janus spheres, cylinders, and sheets have been obtained. In this combined theoretical and experimental work, we show that the blending of polybutadiene homopolymer (hPB) into lamella morphologies of polystyrene-block-polybutadiene-block-polymethylmethacrylate (SBM) triblock terpolymers allows the continuous tuning of the polybutadiene (PB) microphase. We systematically vary the volume fraction of hPB in the system, and we find in both experiments and simulations morphological transitions from PB-cylinders to perforated PB-lamellae and further to continuous PB-lamellae. Our simulations show that the hPB is distributed homogeneously in the PB microdomains. Through crosslinking of the PB domain and redispersion in a common solvent for all blocks, we separate the bulk morphologies into Janus cylinders, perforated Janus sheets, and Janus sheets. These studies suggest that more complex Janus nanostructures could be generated from ABC triblock terpolymers than previously expected.
Keywords: block copolymers; bulk morphologies; DPD simulations; Janus nanostructures; polymer blending block copolymers; bulk morphologies; DPD simulations; Janus nanostructures; polymer blending

Block copolymers (BCPs) consist of two or more incompatible segments that microphase separate on a characteristic length scale of 10–100 nm [1]. Their ability to spontaneously form nanostructures of defined geometry is extensively used in soft matter and materials science to create functional materials in dilute solution, in emulsions, and in bulk [2]. Bulk morphologies of AB diblock copolymers have been particularly well studied and applied as templates for inorganic materials [3], for catalysis or energy conversion [4,5], as nanoporous membranes [6,7], lithographic masks [8,9], and in photonics [10]. By synthetic variation of the volume fractions through block lengths ϕA (ϕB = 1 − ϕA), the geometry of the nanostructure is controlled from spheres to cylinders, as well as gyroid and lamella morphologies. The gyroid morphology is attractive for high surface area applications [3], however, it is only found in a rather narrow window of the microphase diagram, i.e., as a transition structure between cylinders and lamellae. Depending on the chemical nature of the monomers, it can be challenging to target specific microphases synthetically. The choice of solvent, evaporation rate, and external fields are suitable means to manipulate the resulting morphology [11,12].
ABC triblock terpolymers, i.e., BCPs with three different blocks, naturally have a larger number of interaction parameters and thus display a much more complex microphase behavior as confirmed by theory and experiment [13,14,15,16,17]. Pioneered by Reimund Stadler already in the early 1990s [18,19,20,21,22,23], many research groups have since then invested efforts to analyze and understand the microphase behavior of ABC triblock terpolymers [24,25,26,27,28]. Lamellar morphologies are of particular interest as they give access to Janus nanoparticles (JNPs) by crosslinking of the “sandwiched” B microphase. Depending on the weight fraction of the B block, fB, Janus spheres, cylinders and sheets/discs have been synthesized [29,30,31,32]. Such polymeric JNPs with one dimension in the range of 10–100 nm are attractive colloidal surfactants [33] and useful for applications related to interfacial stabilization [34,35,36,37]. Although the desorption energy of JNPs from oil-water interfaces scales with particle radius [38], JNPs with cores of only 10 nm radius reduce interfacial tension considerably and are able to cause interfacial jamming [39,40,41,42].
Given the complexity of the ternary phase diagram, it is likely that more Janus geometries still remain undiscovered. However, synthetic variation of block weight fractions and/or monomer chemistry requires considerable experimental effort making the exploration of suitable morphologies challenging. In that regard, blending of low molecular weight additives is a convenient tool to alter domain volumes of ABC triblock terpolymers in a continuous manner [43]. Supramolecular complexation with small molecular weight hydrogen bond donors is one possibility to induce gradual changes to the morphology if hydrogen bond acceptors are present in the polymer [44]. For instance, modification of the middle block of polystyrene-block-poly(4-vinylpyridine)-block-poly(tert-butyl methacrylate) with azobenzene derivatives induced a morphological transition from P4VP cylinders to a perforated P4VP/Azo lamella [45]. Homopolymers were also used to swell individual phases and invoke morphological transition [46,47,48], while compatible diblock copolymers or triblock terpolymers were blended to other triblock terpolymers to explore the formation of novel superlattices [49,50,51,52,53,54,55]. These examples encourage the idea that any “sandwiched” microphases could be altered by swelling with a compatible low molecular weight homopolymer to change the geometry of the resulting JNPs.
In a previous work, we studied the self-assembly of polystyrene-block-polybutadiene-block-polymethylmethacrylate (SBM) triblock terpolymers in the confinement of microemulsions and obtained different JNP morphologies from the same SBM terpolymer [56]. These results suggest that an fPB of 22 wt% should be close to a morphological transition, which makes this candidate ideal for studying the effect of polybutadiene homopolymer (hPB) blending on the bulk morphology. In this contribution, we demonstrate that blending of specific amounts of hPB allows the continuous tuning of lamellar bulk morphologies of SBM from polybutadiene (PB) cylinders to a continuous PB lamella. Here, we first observe lateral fusion of the PB cylinders into hexagonally perforated PB lamellae, before perforations are closed upon further addition of hPB. Complementary dissipative particle dynamics (DPD) simulations confirm these structural transitions at similar amounts of added hPB. Further, the simulations reveal that the added hPB is dispersed homogeneously throughout the PB microdomains. Crosslinking of the PB domains and redispersion of the bulk film in tetrahydrofuran (THF) results in JNPs where perforated Janus nanosheets pose interesting materials in terms of directional adsorption to interfaces and for separation applications [57].

For bulk film preparation, hPB was first dissolved in CHCl3 to obtain a solution of 20 g·L−1. Then, in a 40 mL glass vial, 50 mg of terpolymer was dissolved in 2 mL CHCl3, mixed with an appropriate amount of homopolymer solution according to Table 1 and stirred for 2 h. The solvent was evaporated over the course of 5 days under constant CHCl3 atmosphere. After film formation, the vial was cooled with liquid nitrogen and the bulk film released by breaking the vial.

The bulk films were placed in a glass chamber and 100 µL S2Cl2 was added in a separate container, before the chamber was closed. Crosslinking proceeded via gas phase overnight. The next day, the films were removed and left for evaporation of excess sulphur monochloride overnight. For the transmission electron microscopy (TEM) measurements, bulk films were cut into ultrathin sections on a Leica EM UC7 ultramicrotome, deposited on a carbon-coated copper grid (200 mesh, Science Services), and stained with OsO4 vapor for 3 h prior to measurements. If redispersion was desired, the bulk films were dissolved in THF to obtain a concentration of 1 g·L−1, 3 days prior to measurements at least.

The TEM measurements were performed on a JEM-1400 Plus TEM (JEOL, Freising, Germany), operated at an accelerating voltage of 120 kV, a point resolution of 0.38 nm, as well as a line resolution of 0.2 nm. Images were recorded with a 16-bit 4096 × 4096 pixel CMOS digital camera and processed through the FIJI open-source software package. For sample preparation, one drop of the bulk film solution (c = 1 g·L−1) was deposited on a carbon-coated copper grid (200 mesh, Science Services). All samples were stained with OsO4 for 3 h prior to measurements.

In our DPD simulations we used a coarse-grained bead-spring model, where each SBM triblock terpolymer was represented by spherical beads of diameter and unit mass , connected through harmonic springs. We matched the weight fraction of the individual blocks to the experiments, leading to , , and beads for the S, B, and M blocks, respectively. Using this level of coarse-graining, each bead had a diameter of and contained between 35 and 60 monomers depending on the particle type. Thus, each bead effectively represented a coil-like segment of the terpolymer. The effective pair interaction between such coils is rather soft and bounded [58,59], and therefore we used the typical soft repulsion for the conservative forces, , between bonded and nonbonded monomers [60] where, is the radial distance between the center of two particles and is the unit vector connecting them. The parameter controls the maximum repulsion between particles of types and (the specific values for are discussed further below and summarized in Table 2. Bonds within a chain are modelled using harmonic springs with force with spring constant set to in the reduced simulation units [61].
In addition to these conservative forces, the particles are also subject to pairwise dissipative, , and random forces, , which impart thermal fluctuations and drag while also serving as a thermostat on the DPD particles. The terms are given by where, is the drag coefficient between particles of type and , is a weight function, and is the velocity difference of the particle pairs. The variable is an independent random variable drawn for each particle pair that obeys and to satisfy the fluctuation-dissipation theorem [62]. In this work, we used the same drag coefficient independent of particle type. For the weight function, we employed the (standard) form
We chose a particle number density of and set the interaction strength between particles of the same type to . Note, that this parameter combination has been originally determined by Groot and Warren to match the compressibility of water [60], but since then this choice has been widely used to model other (incompressible) liquids and polymer melts [61,63,64,65]. Groot and Warren have also derived a relationship between and the Flory–Huggins parameter [60]
In Section 3, we discuss how the specific values have been obtained. The resulting values for are listed in Table 2 below. Simulations were conducted in a rectangular box with periodic boundary conditions in all three Cartesian directions. The box dimensions were chosen as and , so that a hexagonal arrangement of cylinders fit into the box. For the systems containing homopolymers, the box volume was adjusted accordingly to maintain a particle number density of . All polymers were initially placed randomly at positions in the box and the cross interaction was set to (i.e., ). Then, was linearly increased to its final value over steps with a time step . We performed three independent simulations per state point to gather statistics.

We demonstrated that blending of B homopolymer into lamella morphologies of ABC triblock terpolymers is a promising route for tuning the B microphase and thus the shape of Janus nanostructures after crosslinking. Experiments and DPD simulations were in very good agreement regarding observed morphologies as well as morphological transitions. This combined approach helped to gain valuable insight into formation and stability of sandwiched microphases and offers guidelines to target specific morphologies for other ABC/B terpolymer blends. The formation of perforated Janus sheets is of particular interest, as BCPs have demonstrated to be a versatile and scalable source for isoporous membranes [72,73]. Due to the uniform porosity, BCP membranes have successfully been applied in water purification, as the nanometer-sized holes are suitable to withhold the smallest impurities [74,75]. Janus membranes have likewise generated considerable interest in recent years due to their application in selective separation [57]. The presented perforated nanosheets have pore sizes of about 20 nm, Janus character, and are flexible, which will allow studies on directional adsorption to interfaces and selective separation of nanoparticles or molecules depending on chemistry. We believe that the presented blending route will give access to a vast library of perforated Janus nanosheets with tuneable properties depending on the used ABC triblock terpolymer.

The authors would also like to thank the Imaging Centre Essen (IMCES) at the University Clinic in Essen, where most of the TEM data was recorded. 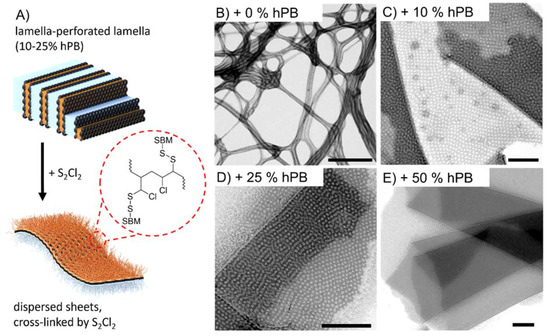 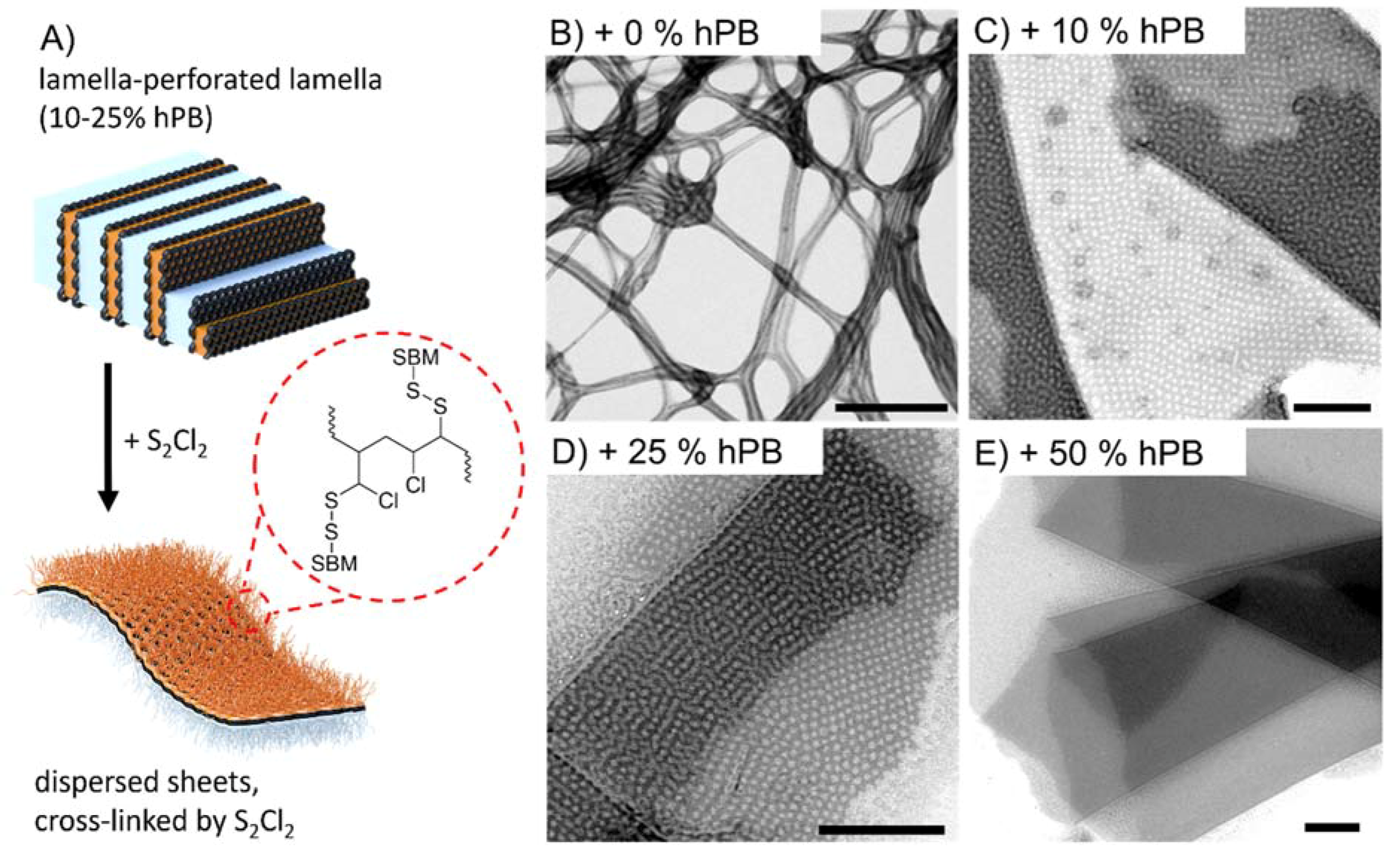