Threads Made with Blended Biopolymers: Mechanical, Physical and Biological Features

Poly (Lactic Acid), PLA, and Poly (ε-CaproLactone), PCL, compatibilized with Ethyl Ester l-Lysine Triisocyanate (LTI) can be employed as biomaterials. We mixed PLA with PCL and LTI in a twin extruder and by a melt spinning process obtained threads with an average diameter of about 0.3 mm. In order to study the possible application of these threads, mechanical tensile (with the calorimetric and morphological investigations) and biological tests were performed. The results highlighted these biopolymers as promising materials for sutures since they can be rigid and elastic (especially by increasing the PCL amount in the blend), and they are bioactive, able to inhibit bacterial growth. This paper represents a starting point to optimize the blend composition for biomedical suture application.
Keywords: biopolymer blend; thread; mechanical characterization; bioactivity; antibacterial biopolymer blend; thread; mechanical characterization; bioactivity; antibacterial

Blends were obtained by adding the reactive compatibilizing agent in various amounts to a 50/50 ratio (w/w) of PLA/PCL (where PLA stands for the Poly(Lactic Acid) BioFlex 6510, supplied by FKUR (Kunststoff, GmbH Willich, Germany), Mn = 197,000 Da and PCL stands for Poly (ε-CaproLactone), supplied by Sigma-Aldrich s.r.l. (Milan, Italy) Mn = 80,000 Da, both dried at 50 °C overnight before processing).
The two immiscible polymers have been compatibilized by adding the Ethyl Ester l-Lysine Triisocyanate (LTI, purchased from Infine Chemicals Ltd., Pudong Avenue, Shangai, China, d = 1.21 g/mL) in different amounts (0.5–1.0–2.0–5.0 phr, per hundred resin). The threads have been codified as EX (for the EXstruded uncompatibilized PLA/PCL thread,) and as EXT05, EXT1, EXT2 and EXT5 for the Extruded compatibilized PLA/PCL/LTI threads, depending on the LTI amounts (code “T”) of 0.5–1.0–2.0–5.0 phr, respectively.
PLA/PCL and PLA/PCL/LTI blends have been extruded in a Mini Lab II Haake Rheomex CTW 5 conical twin-screw extruder at 160 °C with a screw speed of 20 rpm for a re-circulating time of 3 min and extrusion time of 8 min. The temperature of 160 °C was chosen since a lower temperature (150 °C) was not enough to completely melt the PLA while a higher temperature (180 °C) degrades the polymers inside the extruder. LTI was added 2 min after the mixing started.
The monofilament that comes out of the extrusion die is quenched in air and has a diameter of 1.5 mm. Then, it is stretched at a constant rate of 67 rpm by means of three pulleys of the spinning prototype system that is able to collect the wire (Figure 1, left). Thus, the filament thread reaches an average diameter of about 0.3 mm (Figure 1, right). For the transmission of the motion of the mechanical shafts, toothed belts have been chosen and suitably assembled with the pulleys. The prototype is equipped with a high quality brushless DC motor (BLDC). The speed of the BLDC motor is controlled using a Digital EC Controller (DEC). The value of 0.3 mm is within the typical diameter range of the suture threads described in the European Pharmacopeia (metric scale). The European Pharmacopeia identifies the wires regardless of their nature and characteristics, with a single numbering corresponding to their caliber expressed in tenths of a millimeter which ranges from 0.1 (minimum caliber) to 8, (maximum caliber) or from 0.02 mm to 0.89 mm [25]. In Figure 1 (right), we can observe a change in color of the blend from the typical white-milk (of PLA/PCL) to light-brown (of PLA/PCL/LTI) by increasing the LTI amount, whose color is dark brown.

Rheological measurements allow us to check the viscosity (η) change during the PLA, PCL and LTI reactive mixing by means of MiniLab II Haake Rheomex CTW 5, at a temperature of 160 °C, with a screw rate ranging between 0.1 and 100 rpm (shear rate γ’) for a re-circulating time of about 15 min.
Differential Scanning Calorimetry was performed by a Mettler Toledo-DSC1, from room temperature to 200 °C, with a heating rate of 10 °C/min and water cooling.
The crystalline degree of PCL, χ, was calculated using the following equation: where ΔHm [J/g] is the melting enthalpy, φ is the weight fraction of the studied material and ΔH0 [J/g] is the theoretical enthalpy of fusion of a polymer crystal of infinite extension [26,27]. The initial crystalline fraction of PLA, χi, was calculated using the following equation: where ΔHcc [J/g] is the “cold-crystallization” enthalpy of PLA. Cold crystallization is due to the PLA re-organization into more ordered regions induced by the thermal heating of the DSC test [28]. Equation (3) has been used to calculate the crystalline degree of the cold crystallized PLA (χcc).
Mechanical uniaxial tensile tests were conducted by a Lloyd LR10K universal testing machine, following the standard ASTM D2256-2002 with a length of about 500 mm as the distance of the clamps along the specimen axis (active length), a crosshead speed of testing of 10 mm/min, a load cell of 500 N, a room temperature of about 20 °C, and a relative humidity of about 51% (it must be no more than 65%). The threads were tested in the straight mode by measuring the average tensile parameter and their standard deviations of yielding strength (σy, MPa), breaking strength (σb, MPa), breaking strain (b, %), Young modulus (E, MPa), work at break (J).
Mechanical comparison with the data of the threads from the literature were performed on the EXT1 sample (chosen as the best among those investigated) using 600 mm as the active length and a crosshead speed of testing of 120 mm/min according to the United States Pharmacopeia (USP) standards for tensile strength (both in straight, unknotted and in o-knot, knotted) [20]. The o-knot was placed at the center of the active length. Threads were attached to each tensile mount by tying the suture to the crossbar of the tensile mount and then wrapping two times along the shaft of the tensile mount.
Scanning Electron Microscopy (SEM) images were obtained using an FEI Quanta FEG 450 microscope operating with an accelerating voltage of 5 kV in the low vacuum mode and placing the samples on aluminum holders by means of graphitic glue. Threads were broken in liquid nitrogen to obtain the inner circular section observed by the microscope. Samples surfaces were coated with a thin chromium layer to make them conductive. Magnifications were of 7250× and 20k×.
A Bioactivity Testproposed by Kokubo [29] was used to evaluate the bioactive properties of the materials. The samples were soaked in a simulated body fluid (SBF) for 7, 14, 21 days at 37 °C. The ion concentration contained in the SBF solution is almost equal to that of human blood plasma (Table 1). The SBF was prepared by dissolving different chemical reagents; NaCl, NaHCO3, KCl, MgCl2, 1 M HCl, CaCl2·6H2O, and Na2SO4 (Sigma-Aldrich, St. Louis, MO, USA) as shown in Table 1. 1 M HCl was used to adjust the pH of the buffer to pH 7.4.
The solution was replaced every two days to avoid the depletion of ionic species in the SBF. After 7, 14 and 21 days, the samples were dried in a glass desiccator and, afterward, the formation of an apatite layer on the sample surface was evaluated by SEM and XRD analysis. XRD analysis was carried out in the range of 2θ from 20° to 70° using a Philips 139 diffractometer (Philips, Amsterdam, the Netherlands) equipped with a PW 1830 generator, tungsten lamp, and Cu anode, where the source 140 of X-ray is given by a Cu-Kα radiation (λ = 0.15418 nm).
Antibacterial activity of the samples was studied using Escherichia coli (ATCC 25922). A bacterial cell suspension of 10 × 105 CFU/mL was produced by diluting the bacterial culture in distilled water. E. Coli was inoculated into a TBX medium (tryptone bile X-gluc) (Liofilchem, Roseto degli Abruzzi TE, Italy). Subsequently, the samples were sterilized and incubated with bacteria for 24 h at 44 °C. Microbial growth was assessed by observing the formation of the colony-forming units. The results were obtained on samples analyzed three times and used to determine the mean standard (SD) deviation of measurements.

) are (002), (211), (300), (202), (310), (002), (222), and (213), regardless of the content of the Triisocyanate. In Figure 8 only the XRD spectrum of the EXT0.5 thread is reported since no significant differences in the intensity of the XRD signals are observed, despite the different amounts of Triisocyanate and the different hydroxyapatite distribution on the material’s surface. The intensity of the XRD signals is due to the hydroxyapatite layer, confirming that the materials are bioactive [38].
The EX, EXT05 and EXT5 samples with different amounts of Triisocyanate were incubated with E.coli bacterial strains. Because suture materials are the most frequently used foreign materials in surgeries and since most wound infections occur along suture lines, the use of materials that do not induce bacterial growth is necessary [39].
Figure 9A reports representative images of the samples after 24 h of incubation. The antibacterial results show that the materials investigated do not induce the growth of E. coli. No significant difference in growth inhibition was found among the different samples. In fact, it is not possible to see the formation of colony-forming units (Figure 9B). Therefore, these results suggest that the presence of these materials in the human body could cause an environment not suitable for bacterial growth. This is probably due to no products that affect the growth and proliferation of bacteria being released from different threads. It was demonstrated that these threads could be used as drug delivery systems. In the future different drugs could be added to reduce the risk of infections.

In this paper, we studied a blend based on bio-polyesters Poly (Lactic Acid), PLA and Poly (ε-CaproLactone), PCL, with the aim to find a specific application of this material in regenerative medicine. Due to the complementary features of the bio-polyesters, they must be blended and compatibilized with Ethyl Ester l-Lysine Triisocyanate (LTI) at different loads (0.5–1.0–2.0–5.0 phr).
We mixed them in a twin extruder and produced threads by a melt spinning process; the average diameter was about 0.3 mm. In order to check if these threads can be employed as sutures, mechanical tensile (with the calorimetric and morphological investigations), and bioactivity and antibacterial tests are performed.
Results highlighted that the 1.0 phr of LTI seems to be the best compatibilizing amount since lower amounts are enough to appreciably change the blend features, while higher loads produce threads that are too rigid with decreased ductility. This last aspect can be optimized by tailoring the ratio of the two bio-polyesters (i.e., considering the ratio PLA/PCL (20/80) that produces a cross-linked network with a “rubber-like” behavior with a typical high ductility due to a long spacing between the cross-links, already investigated [31]). Thus, the PLA/PCL/LTI threads could be employed as sutures since they were shown to be ductile materials, with appreciable stiffness and deformability even when a knot is formed, and to be bioactive, able to inhibit the bacterial growth. Furthermore, in order to improve the thread processing, extrusion in an inert environment can be performed to avoid possible thermomechanical degradation of PLA. Work is in progress to evaluate another important aspect of their use as absorbable threads, namely, the appropriate time of bio-degradability of the sutures.

In Authors thank C. Borsellino and D. Nocita of Department of Engineering of University of Messina, for the help in the realization of the prototype for wire production and for the helpful discussion, respectively. 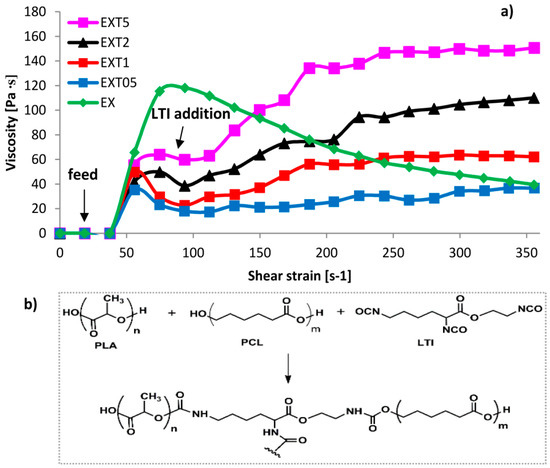 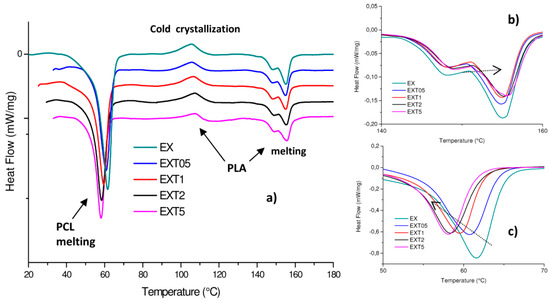 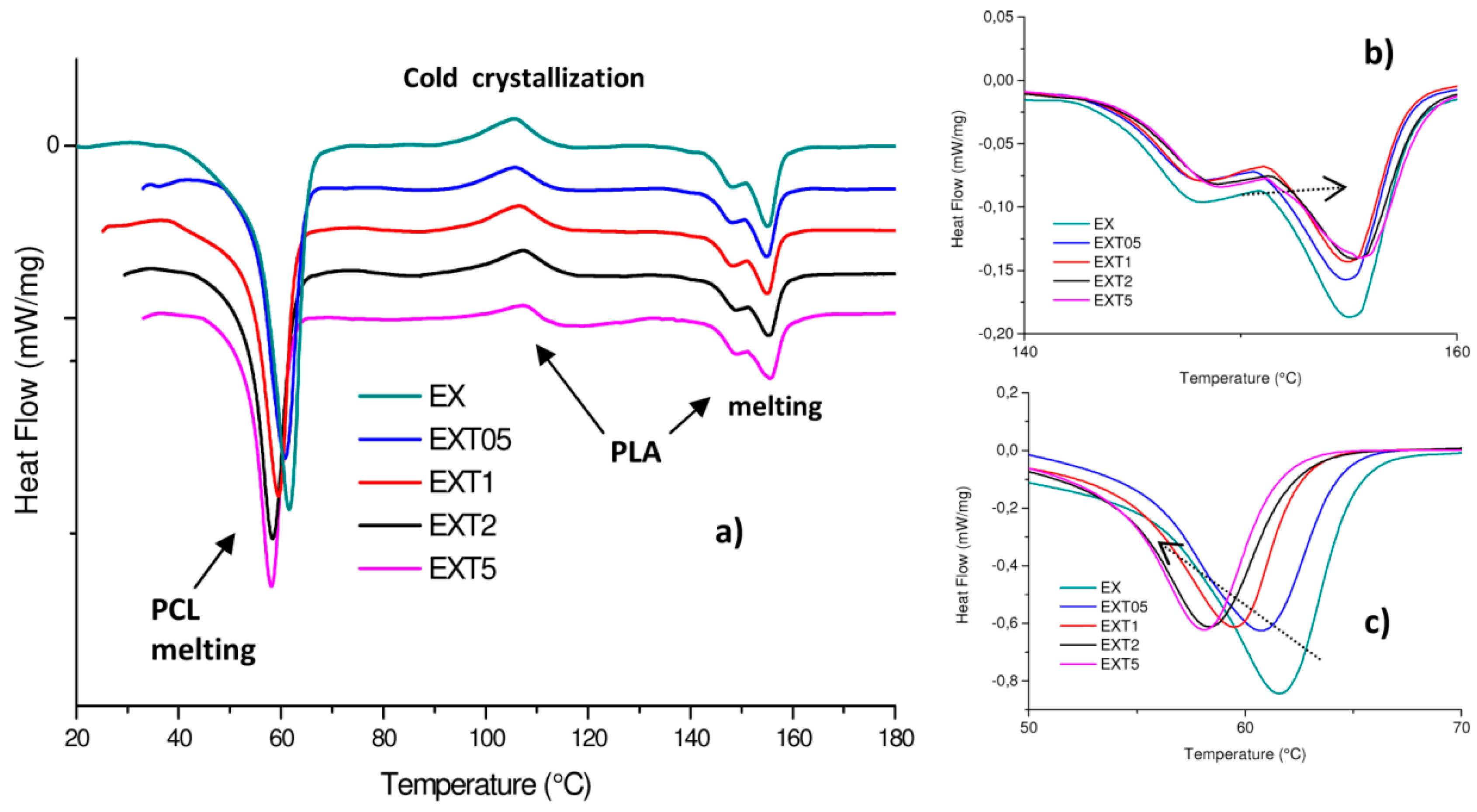 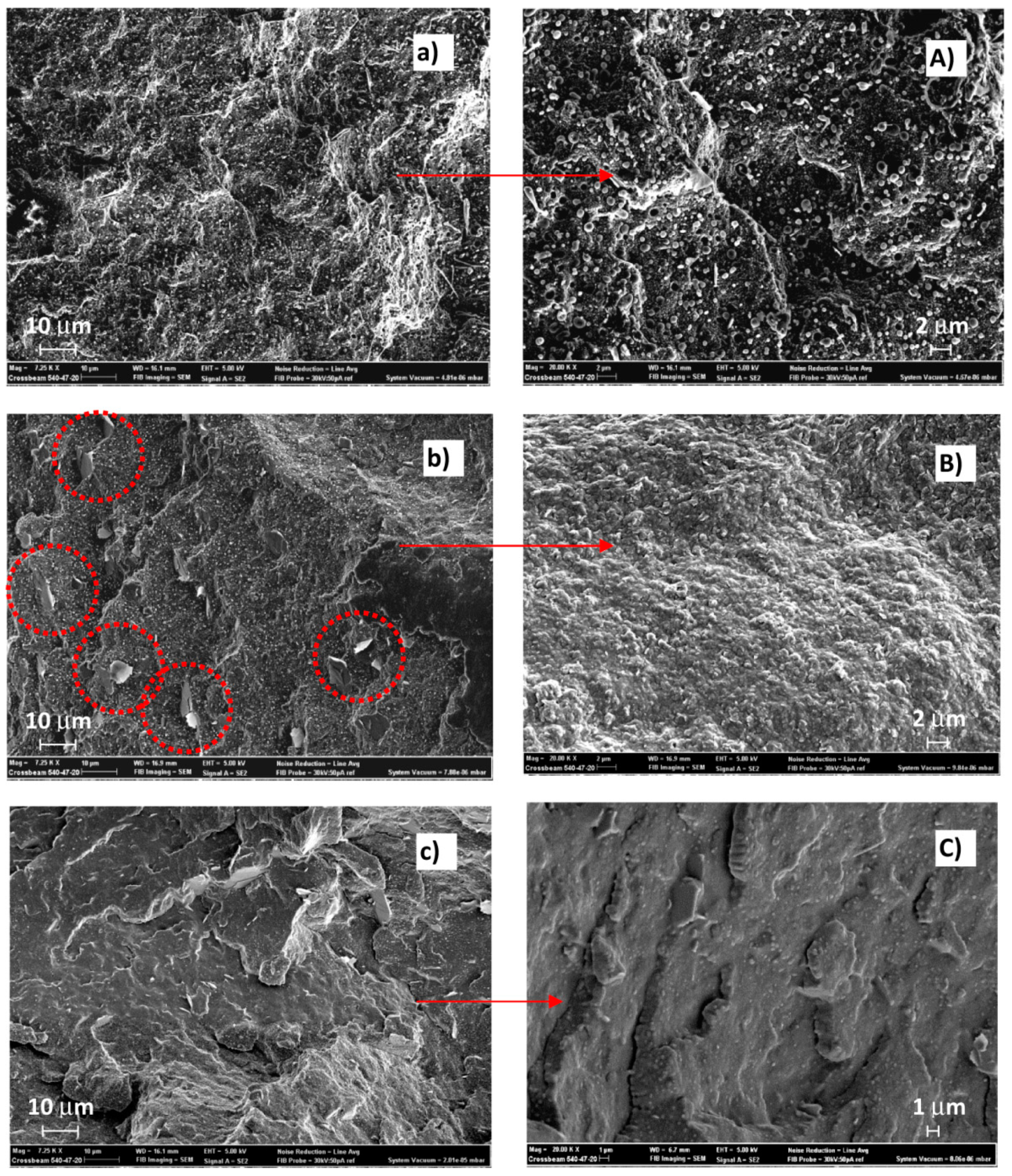 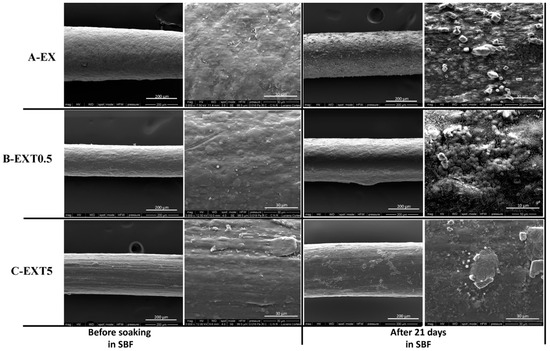 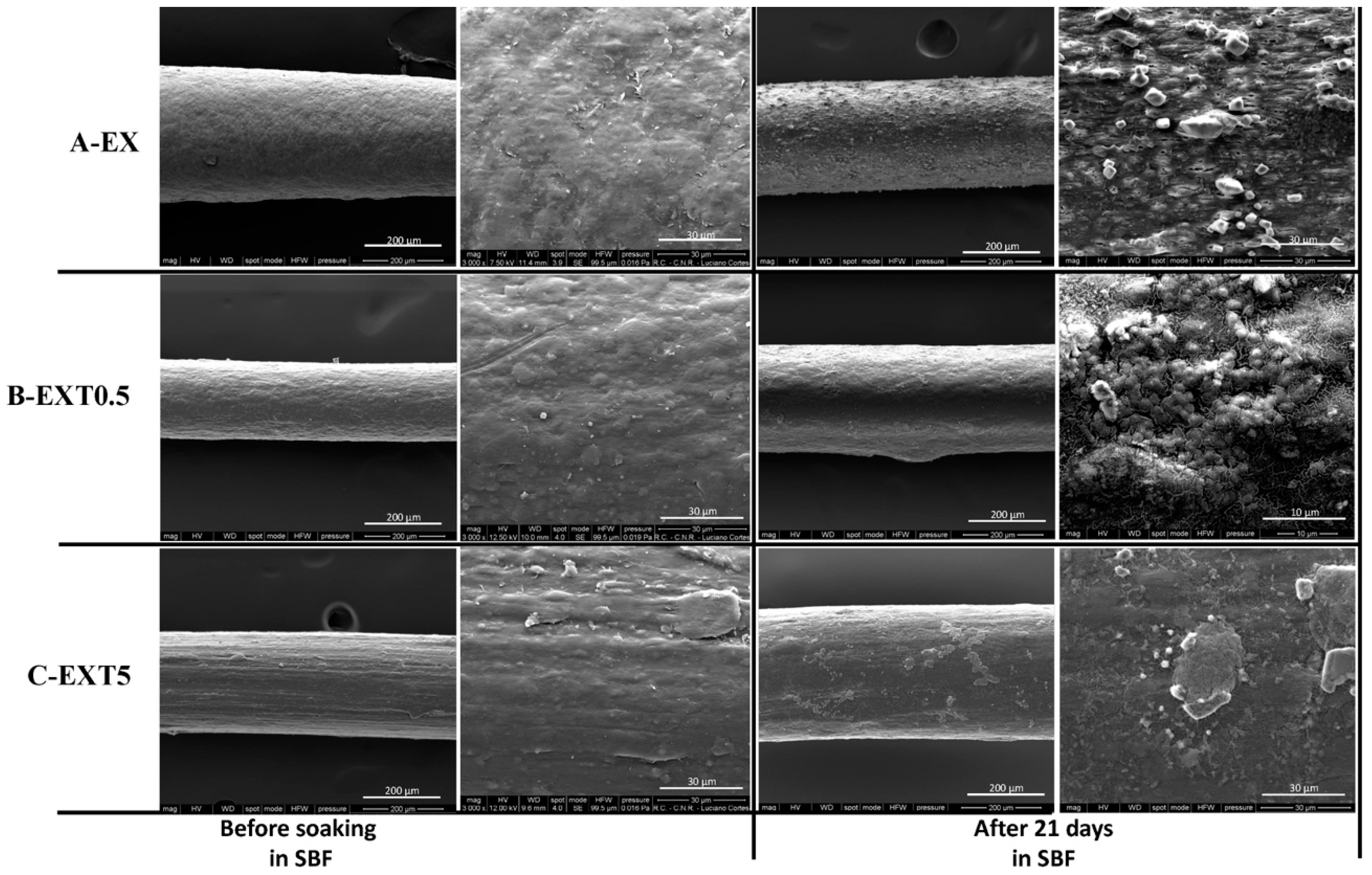 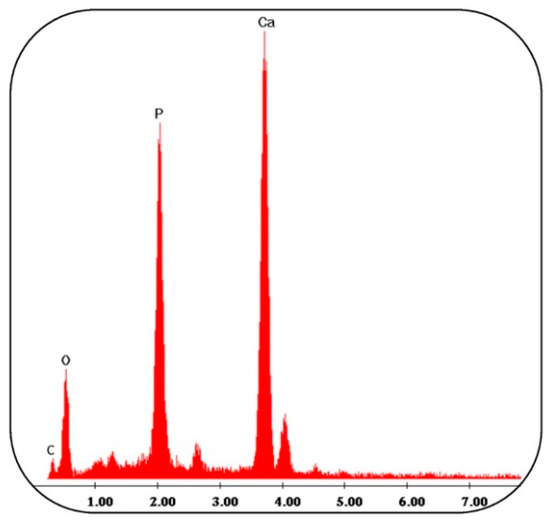 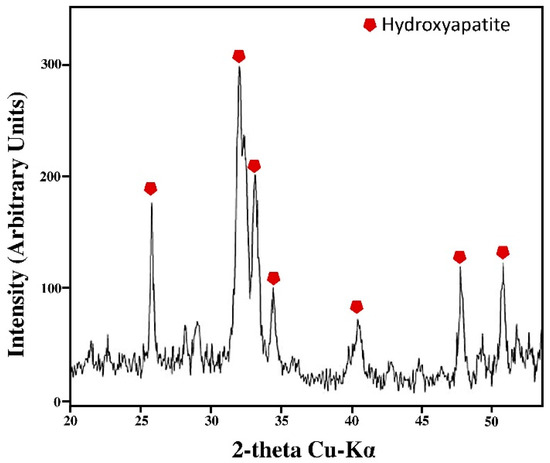