Simulation studies were performed on filling imbalance in geometrically balanced injection molds. A special simulation procedure was applied to simulate properly the phenomenon, including inertia effects and 3D tetrahedron meshing as well as meshing of the nozzle. The phenomenon was investigated by simulation using several different runner systems at various thermo-rheological material parameters and process operating conditions. It has been observed that the Cross-WLF parameters, index flow, critical shear stress (relaxation time), and zero viscosity, as well as thermal diffusivity and heat transfer coefficient strongly affect the filling imbalance. The effect is substantially dependent on the runners’ layout geometry, as well as on the operating conditions, flow rate, and shear rate. The standard layout geometry and the corrected layout with circled element induce positive imbalance which means that inner cavities fills out faster, and it is opposite for the corrected layouts with one/two overturn elements which cause negative imbalance. Generally, for the standard layout geometry and the corrected layout with circled element, an effect of the zero shear rate viscosity η0 is positive (imbalance increases with an increase of viscosity), and an effect of the power law index n and the relaxation time λ is negative (imbalance decreases with an increase of index n and relaxation time λ). An effect of the thermal diffusivity α and heat transfer coefficient h is negative while an effect of the shear rate is positive. For the corrected layouts with one/two overturn elements, the results of simulations indicate opposite relationships. A novel optimization approach solving the filling imbalance problem and a novel concept of global modeling of injection molding process are also discussed. View Full-Text
Keywords: injection molding; filling imbalance; 3D modeling injection molding; filling imbalance; 3D modeling
►▼ Show Figures 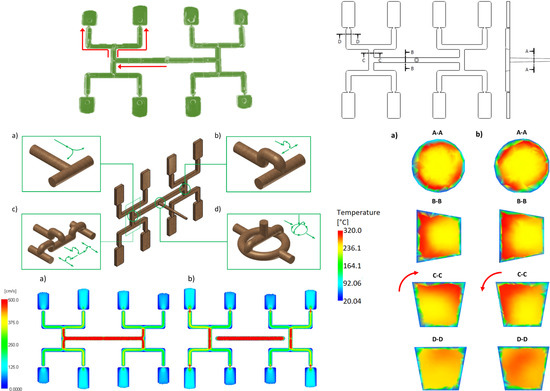