Xylans of Red and Green Algae: What Is Known about Their Structures and How They Are Synthesised?
Previous Article in Journal

The presence of antimony(III) in water represents a worldwide concern, mainly due to its high toxicity and carcinogenicity potential. It can be separated from water by the use of sustainable biopolymers such as chitosan or its derivatives. The present study applied chitosan modified with iron(III) beads to Sb(III) removal from aqueous solutions. The resulting material performed with a high adsorption capacity of 98.68 mg/g. Material characterization consisted of Raman spectroscopy (RS), X-ray diffraction (XRD), scanning electron microscope observations (SEM-EDX), Fourier transform infrared spectroscopy (FTIR) and point of zero charge (pHpzc). The adsorption study included pH study, effect of initial concentration, kinetics, ion effect, and reusability assessment. The RS, XRD, and FTIR results indicated that the main functional groups in the composite were related to hydroxyl and amino groups, and iron oxyhydroxide species of α-FeO(OH). The pHpzc was found to be 7.41. The best adsorption efficiency was set at pH 6. The equilibrium isotherms were better fitted with a non-linear Langmuir model, and the kinetics data were fitted with a pseudo-second order rate equation. The incorporation of iron into the chitosan matrix improved the Sb(III) uptake by 47.9%, compared with neat chitosan (CS). The material did not exhibit an impact in its performance in the presence of other ions, and it could be reused for up to three adsorption–desorption cycles. View Full-Text
Keywords: antimony removal; chitosan; iron; sorption antimony removal; chitosan; iron; sorption
►▼ Show Figures 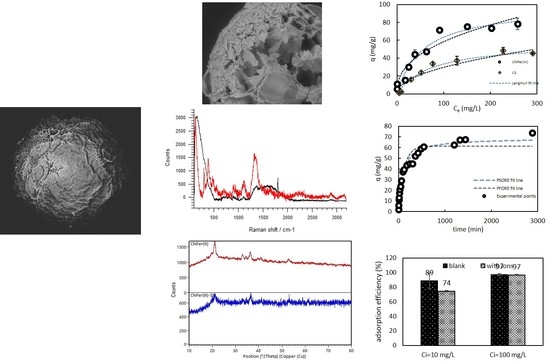