CME-PRXs were synthesized as described previously (Figure S1 from Supplementary Materials) [24,27]. In this experiment, two series of CME-PRXs with different α-CD threading ratios were used to fabricate gelatin hydrogels cross-linked by CME-PRXs, and the characterization of CME-PRXs was summarized in Table S1. CME-PRXs were labeled as CME-PRX-24% and CME-PRX-37%, corresponding to threading α-CD ratios of 24% and 37% in CME-PRXs, respectively, wherein the threading α-CD ratio is defined as the threading percentage of α-CDs in PRXs, assuming that one α-CD molecule forms an inclusion complex with two ethylene glycol units in the PEG axle. PEG chain (molecular weight: 35,000) can stoichiometrically thread 397 molecules of α-CDs at 100% threading ratio. However, it is difficult to collect 100% α-CD-threaded PRXs regardless of the feed ratio of α-CDs and PEG. The actual maximum ratio of threading α-CDs is approximately 40%. Further, PRX having a low ratio of threading α-CDs is difficult to purify and collect since it has the same polymer properties as unreacted PEG. Therefore, 24% and 37% of threading α-CDs in PRX indicate minimum and maximum ratio of threading α-CDs, respectively. The gelatin hydrogels cross-linked by CME-PRXs were prepared according to previous reports (Figure S2 from Supplementary Materials) [24,28]. In brief, gelatin powder (100 mg) was dissolved in 0.1 M MES buffer (1.0 mL) at 40 °C. CME-PRXs, EDC, and NHS were dissolved in 0.1 M MES buffer (1.0 mL) and activated to o-acylisourea or NHS-ester formation for 10 min at room temperature [29]. Activated CME-PRX solutions were then added to the gelatin solution (1:1 volume ratio) and stirred for 1 min at 40 °C. Finally, the mixture (2 mL) was set in a Teflon mold (width: 30 mm; length: 60 mm; height: 1 mm) and gelated to form amide groups between CME-PRX and gelatin at 4 °C, overnight. The fabricated gelatin hydrogels were washed in distilled water to remove the byproducts and unreacted EDC/NHS (1 h, four times). Because gelatin hydrogels have temperature dependency, pure gelatin hydrogels can be melted at 37 °C under the cell experimental condition. For this reason, we did not use pure gelatin as a control in this study.

A FT-IR spectrometer (Spectrum 100, Perkin Elmer, Waltham, MA, USA) was used to detect changes in the characteristic functional groups on the samples. All gelatin hydrogels were ground and blended with KBr to prepare pellets for measurements. All spectra were recorded in the frequency range of 500–4000 cm−1 at a resolution of 4 cm−1 and analyzed using Spectrum software (PerkinElmer). Static contact angle of air bubble was analyzed on each sample in water using a contact angle-measuring instrument (DropMaster DM-501) (Kyowa Interface Science, Saitama, Japan). A single air bubble (5 μL) was put on the surface and monitored using a charge-coupled device camera at 25 °C. The captured images were analyzed using FAMAS version 5.0.0 software (Kyowa Interface Science, Saitama, Japan). The morphology of dried gelatin hydrogels was visualized using Hitachi S-3400NX scanning electron microscopy (Hitachi, Japan). The samples were sputter-coated with 300 nm gold particles (SC-701AT, ELIONIX, Tokyo, Japan). All samples were examined using an accelerating voltage of 15 kV.

A cell culture chamber was fabricated in order to seed cells onto a hydrogel surface with a certain area and fix the stretched gelatin hydrogel. Tissue culture polystyrene (TCPS) plate was cut into a rectangular shape (width: 20 mm; length: 10 mm; height: 1 mm). Some of the rectangular-shaped TCPS chambers contained a round hole (diameter: 3.5 mm) in the center. Gelatin hydrogels (width: 7.5 mm; length: 30 mm; height: 0.5 mm) were sandwiched between original TCPS and holed TCPS plates; then, the two plates were fixed in place using plastic clips. The individual hydrogels were repeatedly stretched and then sandwiched between original TCPS and holed TCPS plates in order to fabricate cell culture chambers with stretched hydrogels. The process of repeatedly stretching is referred to as stretching–relaxation treatment. The cyclic stretching–relaxation was performed 20 times at a speed of 5 mm/s using a 2 N load cell. The stretching range of the hydrogels was 40 % strain.

All hydrogels were sterilized by ultraviolet (UV) irradiation on a clean bench. In order to suppress the degradation of gelatin by UV light, the irradiation time was set to 30 min [31]. After sterilization, the hydrogels were washed three times with PBS. BALB/3T3 clone A31 mouse fibroblasts (RIKEN BioResource Center, Wako, Saitama, Japan) were seeded onto each hydrogel at a density of 0.5 × 104 cells per cm2 and cultured using DMEM supplemented with 10% fetal bovine serum, 100 IU/mL penicillin, and 100 μg/mL streptomycin at 37 °C in a humidified atmosphere with 5 % CO2 for 2 days. The cell morphology was recorded using a phase contrast microscope (IX71; Olympus, Tokyo, Japan) equipped with a dual CCD digital camera (DP80; Olympus, Tokyo, Japan). The number of adhering BALB/3T3 cells on each hydrogel was counted in each image after 3, 6, 12, 24, and 48 h cultivations. In order to evaluate the orientation of the cells on the stretched hydrogels, the angle between the stretching direction of hydrogels and the spreading direction of cells was analyzed by ImageJ software (version 1.48, NIH, Bethesda, MD, USA). At least 187 cells from a minimum of eight images of each hydrogel were analyzed.

All data were analyzed using one-way analysis of variance in Excel software. A value of p < 0.05 was considered to indicate statistical significance.

3.4. Orientation of Adhering Cells on Gelatin Hydrogels Cross-Linked by CME-PRXs

This work was financially supported by the following grants: Grant-in-Aid for Scientific Research (A) and Young Scientists from Japan Society for the Promotion of Science (JSPS; JSPS KAKENHI Grant number: 16H01852, 18J14112); cooperative project among medicine, dentistry, and engineering for medical innovation “Construction of creative scientific research of the viable material via integration of biology and engineering” from the Ministry of Education, Culture, Sports, Science, and Technology (MEXT); interdisciplinary and international project for the development of advanced life innovative materials and human resources from MEXT; and the Ogasawara Foundation for the Promotion of Science and Engineering. 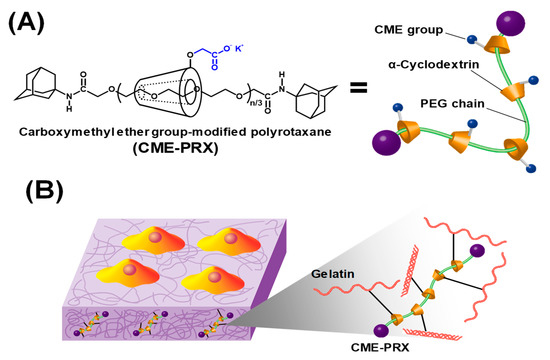 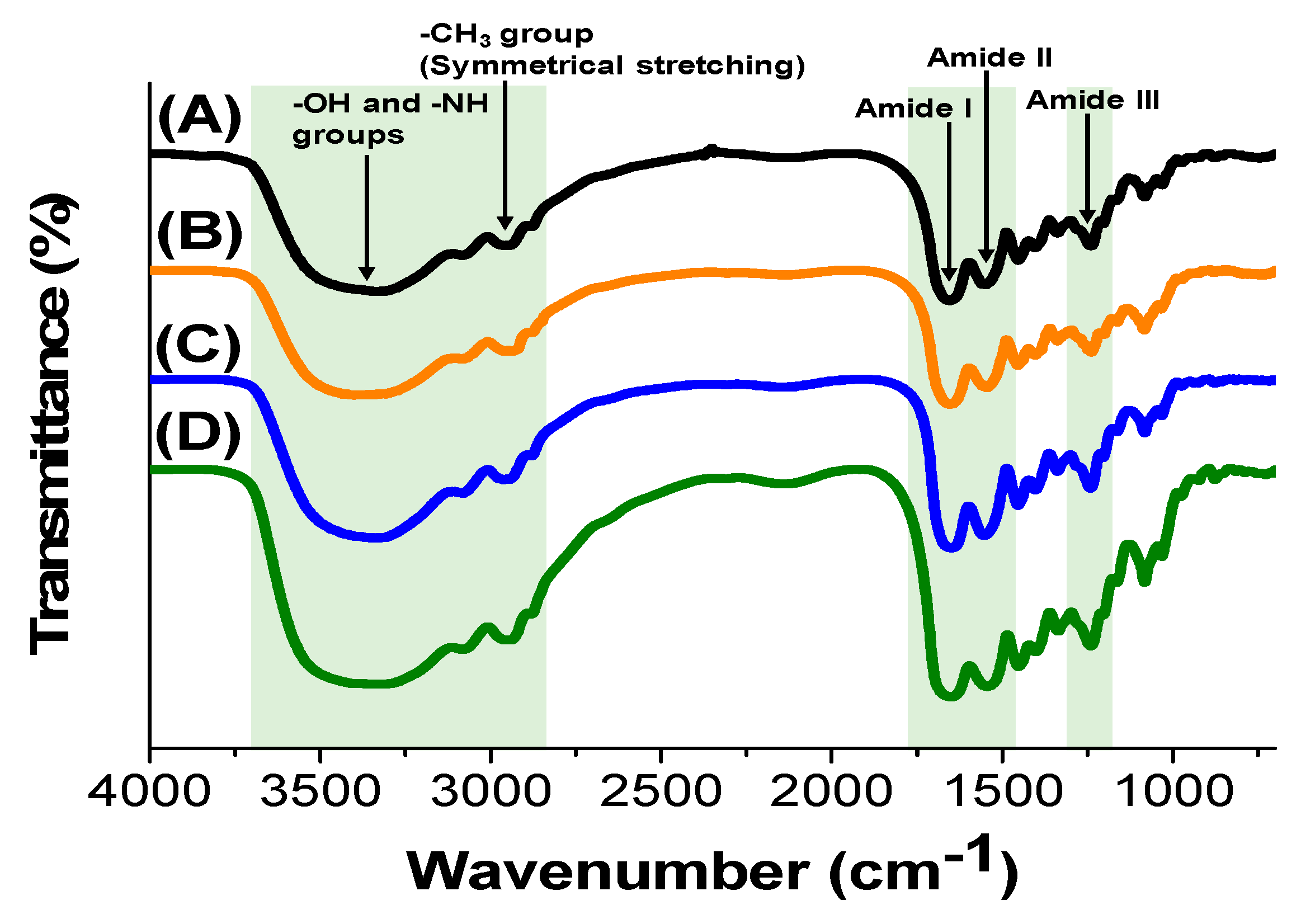 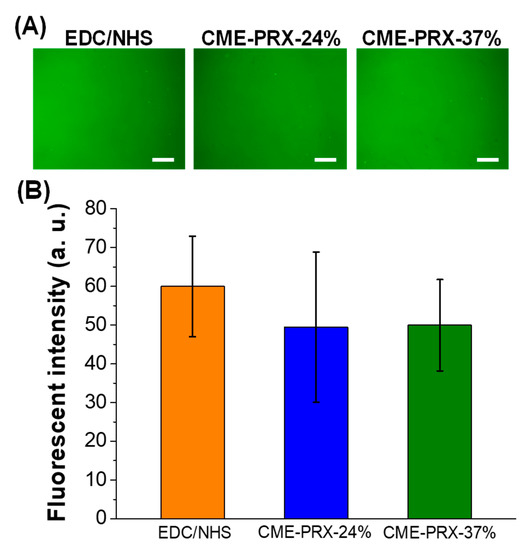 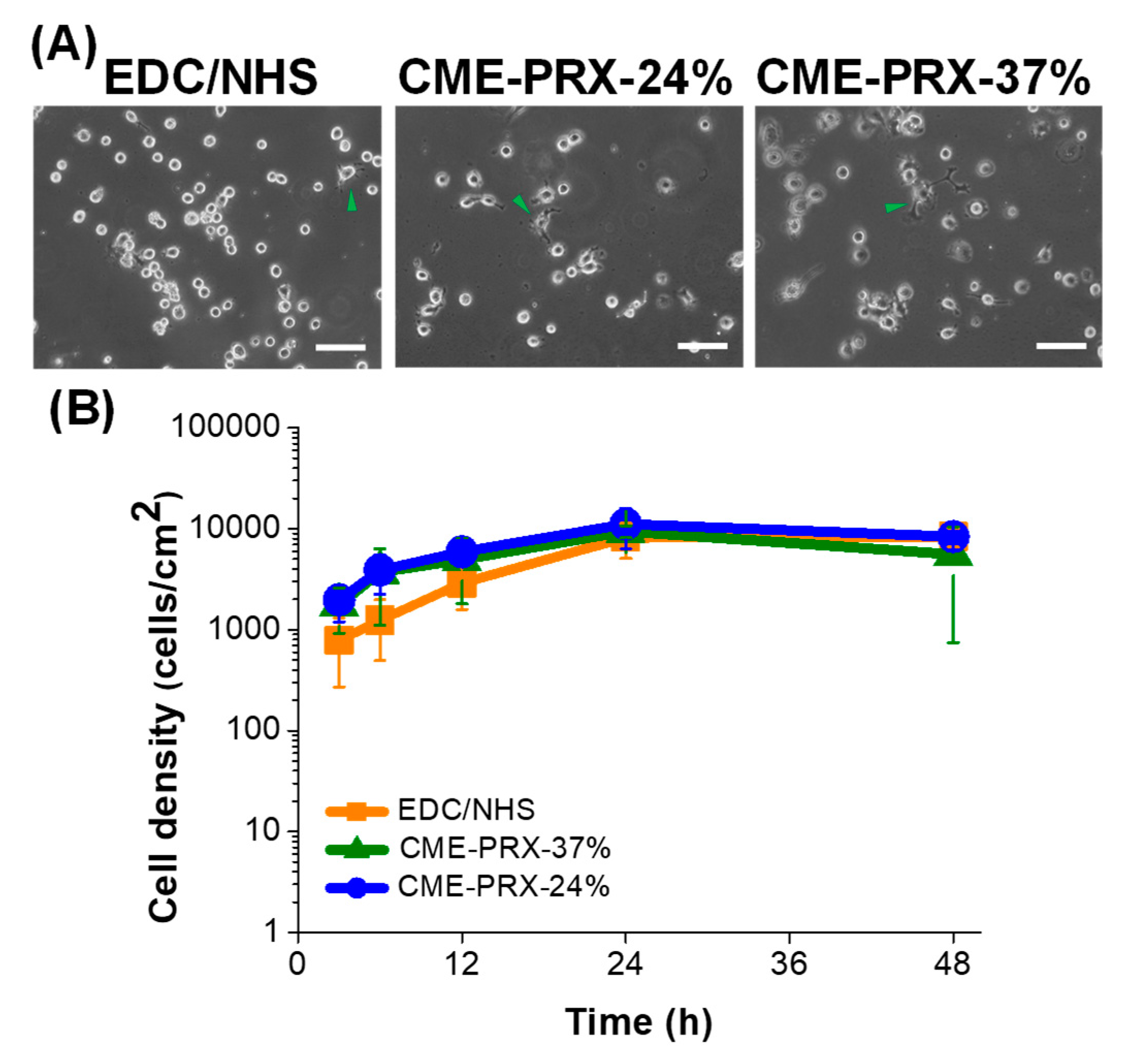