The application of polymeric biomaterial scaffolds utilizing crosslinking strategy has become an effective approach in these days. In the present study, the development and characterization of collagen–chitosan hydrogel film has been reported on using dual crosslinking agent’s, i.e., tannic acid and genipin simultaneously. Incorporation of genipin imparts a greenish-blue color to the polymeric film. The effect of dual crosslinking and their successful interaction within the matrix was evaluated by infrared analysis spectroscopy. The porosity of the film was examined using scanning electron microscopy (SEM). Results of TGA determine the intermediate thermal degradation. Further, the crosslinking phenomenon has found primary impact on the strength of the films. Enzymatic degradation for the films was performed with lysozyme and lipase. The cell adhesion and proliferation was also accomplished using mouse embryonic cell lines wherein the cells cultured on the dual crosslinked film. The thriving utilization of such dual crosslinked polymeric film finds their applications in ophthalmology especially as an implant for temporary injured cornea and skin tissue regeneration. View Full-Text
Keywords: chitosan; collagen; dual crosslinking; polymeric biomaterial chitosan; collagen; dual crosslinking; polymeric biomaterial
►▼ Show Figures 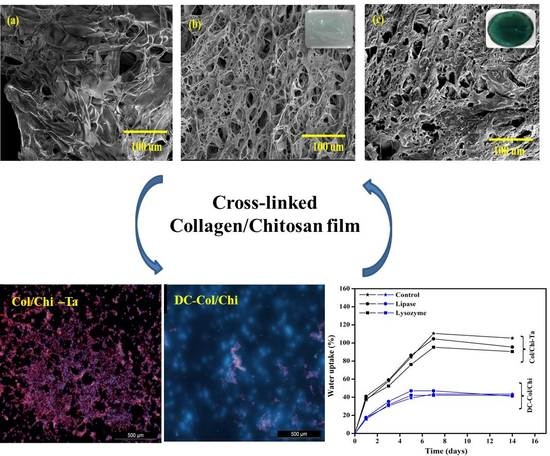