Developing novel functional polyhedral oligomeric silsesquioxane (POSS) for various applications is highly desirable. Herein we present the first example of a novel selenone-functionalized POSS (POSS-Se) by treating an imidazolium-containing POSS with selenium powder under mild condition. The structure of POSS-Se was characterized by FT-IR, 1H NMR, 13C NMR, 29Si NMR, and elemental analysis. Acid treatment of POSS-Se results in a hydrophilic red-orange colored solid, which is highly sensitive and selective for the detection of Hg2+ ions in aqueous solutions by visually observing the color change to pale yellow, and to white. Interestingly, POSS-Se has no activity on this detection. This finding is due to the Se–Se formation by acid-treatment and subsequent coordination-induced cleavage upon the addition of Hg2+ ions. The detection behavior can be precisely monitored by a “turn-on” fluorescence phenomenon with the limit of detection (LOD) of 8.48 ppb, comparable to or higher than many reported Hg2+ sensors. Moreover, POSS-Se demonstrates a selective and efficient adsorption of Hg2+ ions with a maximum capacity of 952 mg g–1. The value is higher than most reported adsorbents for Hg2+ ions, typically thiol and/or thioether functional materials, indicating its promise as an efficient adsorbent for the selective removal of Hg2+ ions from industrial wastewater. This work may open up new horizons for the exploration of selenium-containing functional POSS. View Full-Text
Keywords: polyhedral oligomeric silsesquioxane; selenone; sensors; detection of Hg2+; adsorption of Hg2+; water treatment polyhedral oligomeric silsesquioxane; selenone; sensors; detection of Hg2+; adsorption of Hg2+; water treatment
►▼ Show Figures 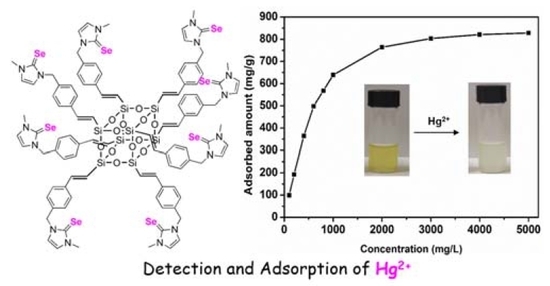