The kinetics and modeling of dual-wavelength (UV and blue) controlled photopolymerization confinement (PC) are presented and measured data are analyzed by analytic formulas and numerical data. The UV-light initiated inhibition effect is strongly monomer-dependent due to different C=C bond rate constants and conversion efficacies. Without the UV-light, for a given blue-light intensity, higher initiator concentration (C10) and rate constant (k’) lead to higher conversion, as also predicted by analytic formulas, in which the total conversion rate (RT) is an increasing function of C1 and k’R, which is proportional to k’[gB1C1]0.5. However, the coupling factor B1 plays a different role that higher B1 leads to higher conversion only in the transient regime; whereas higher B1 leads to lower steady-state conversion. For a fixed initiator concentration C10, higher inhibitor concentration (C20) leads to lower conversion due to a stronger inhibition effect. However, same conversion reduction was found for the same H-factor defined by H0 = [b1C10 − b2C20]. Conversion of blue-only are much higher than that of UV-only and UV-blue combined, in which high C20 results a strong reduction of blue-only-conversion, such that the UV-light serves as the turn-off (trigger) mechanism for the purpose of spatial confirmation within the overlap area of UV and blue light. For example, UV-light controlled methacrylate conversion of a glycidyl dimethacrylate resin is formulated with a tertiary amine co-initiator, and butyl nitrite. The system is subject to a continuous exposure of a blue light, but an on-off exposure of a UV-light. Finally, we developed a theoretical new finding for the criterion of a good material/candidate governed by a double ratio of light-intensity and concentration, [I20C20]/[I10C10]. View Full-Text
Keywords: kinetic model; dual-wavelength; photopolymerization; spatial confirmation; additive manufacturing; 3D printing kinetic model; dual-wavelength; photopolymerization; spatial confirmation; additive manufacturing; 3D printing
►▼ Show Figures 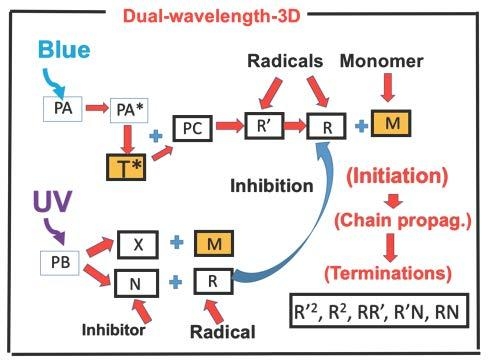