The schematic illustration of the electrostatic-assisted melt-blown system setup and the details around the spinning head are shown in Figure 1. The melt-blown equipment (SH-RBJ) was produced by Shanghai Sunhoo Automation Equipment Co., Ltd. (Shanghai, China). It has a hopper which feeds the raw material into the machine, a heated extruder with a rotating screw inside which pushes material forward, a filter which removes impurities from the melt, and a spinning head. The air blower (TF-65) was produced by Kunshan Ta-Fan Blower Co., Ltd. (Kunshan, China). The high velocity air is generated by the blower, heated by the air heater, and then exits from narrow air gaps of the spinning head. The spinning head has a rectangular shape of about 30 cm in length and is made of steel. It is also heated by a pair of heating rods. There are more than 500 orifices distributed in the middle of the spinning head, and the melt exits the spinning head through the orifices and is drawn into filaments at the orifices by hot air from the air passage. Placed adjacent to the spinning head is a grounded copper frame through which the polymer fiber melts are blown. The collecting mesh is connected to a negative high-voltage DC power source (DW-N503-1ACDF, Dongwen, Tianjin, China) to supply a high-voltage electrostatic field between the frame and the mesh. Here, the high-voltage electrostatic field is applied between the copper frame positioned 2 cm away from the MB head and the collecting mesh, where the electric field intensity is simply treated as a rectangular uniform electric field. The distance between the copper frame and collecting mesh can be adjusted. Polypropylene pellets were fed into the hopper and melted in the extruder. The molten polymer was then extruded out of the spinning head and drawn by the high-velocity hot air. Simultaneously, the electrostatic field between the frame and the mesh helped attenuate fiber diameter to form microfibers. Finally, the fabric was formed on the collecting mesh. A continuous process setup has also been designed and will be discussed in a later communication.

Polypropylene was heated to 265 °C in the extruder and pushed through with a pump rate of 10 g·min−1. The temperature of the hot air was 255 °C, and the flow rate of air was 1.7 m3·min−1 (see in Supplementary Material). The velocity of the air at the exit of nozzle was calculated to be a few thousand meters per minutes, much lower than the sonic speed. When the collecting distance (20 cm) between the copper frame and the collecting mesh was fixed, the voltage (0, 10, 20, 30, and 40 kV) of the DC power was varied to explore the effect of electric field intensity on fiber diameter. When the DC voltage (40 kV) was fixed, the collecting distance (10, 15, and 20 cm) was varied by moving the position of the copper frame to examine the effect of the electric field distance on fiber diameter. The sample was not collected until the machine had run for 0.5 h to produce stable fabric. To ensure consistent fabric thickness, each sample was collected for a continuous production time of 30 s. In addition, the yield of the fabric in this work was 10 g·min−1 in the experiment. It was not affected by application of the electric field and was affected only by the extrusion rate of melt blown.

The morphology and the structure of the PP nonwoven fabric were characterized by a scanning electron microscope (SEM, Hitachi S-4800, Tokyo, Japan). All samples were plated with a thin layer of platinum before SEM imaging to ensure high electrical conductivity. An image processing software (Nano Measurer version 1.2, Shanghai, China) was used to measure the diameter of the fibers. Four sets of positions were randomly selected for each set of samples and more than 100 fibers were counted to obtain the fiber diameter distribution and the mean of the fiber diameter.
The stress-strain curve of the fabric was measured by the Instron Universal Testing System (Instron 5300 Floor Model Universal Testing System, Norwood, MA, USA). The fabric samples were cut into strips of 5 cm in length and 1 cm in width. Each group included 10 strips and their thicknesses were measured by a fabric thickness meter (YG141A fabric thickness meter, Wenzhou, China). The stretching speed was set to 10 mm/min, and the clamping distance was set to 20 mm.
The filtration efficiency refers to the ratio of the dust of a certain diameter that is filtered out to the concentration of the dust in the aerosol before being filtered when the aerosol passed through the filter material. It was tested by a filter media test system (Topas AFC 131, Dresden, Germany). The probe in the system can separately measure the concentration of dust in the aerosol before and after filtration, hence the filtration efficiency was able to be calculated. Di-ethyl-hexyl-sebacat (DEHS) was used as the test aerosol. The concentration of the aerosol was 1.0 mg·m−3 and the flowrate of air was set to 10.0 m3·h−1. The pore size distribution was measured by a pore size meter (Topas PSM 165, Dresden, Germany). The wetting fluid was Topor (perfluoro compound, Topas specific testing fluid, surface tension 16 mN·m−1). The testing cross-sectional area was 0.95 cm2. The flow rate range of the compressed air was from 0.06 to 70.00 L·min−1, and the maximum pressure was 1000.00 mbar. Each group was measured five times, and the filtration efficiency and the pore size distribution were recorded and averaged from five measurements. The filtration efficiency curve and the pore size distribution diagram were drawn from the above data.
In addition, the air permeability of the fabric was measured by an air permeability tester (Textest FX 3300-IV, Schwerzenbach, Switzerland). The testing pressure was set to 200 Pa, and the measured area was 20 cm2. The air permeability of each group was tested based on 10 sets of data, and the mean of the data was taken.

Stress-strain curves of the experimental group and the control group are shown in Figure 5. It can be drawn from the figure that the maximum strength of electrostatic-assisted melt-blown fabrics is about 40% lower than that of conventional melt-blown fabrics, and it decreases from 0.18 to 0.11 MPa. The Young’s modulus of each group was measured to be 1.77 MPa for 0 kV/cm, 1.72 MPa for 1 kV/cm, and 0.80 MPa for 4 kV/cm. This is due to the decrease of the fiber diameter. Tensile properties of nonwovens are related to their structure. The structure of nonwoven fabric is an irregular net structure, the orientation of the fibers varies, and fibers are bonded together by bonding points. When the nonwoven fabric is stretched, the stress of the fabric is related to the stress of the fiber and the strength of the bonding points [2,36]. The strength of the fabrics becomes weaker as the melt-blown fibers become finer due to the reduction of effective bonding between the fibers. This observed phenomenon may be explained by the higher degree of cooling on the finer fibers when they make contact with each other, which results in reduced bonding effectiveness among the fibers, forming a fabric of weaker strength [2,37].

In summary, an electrostatic field was applied directly to the melt-blown spinning head to achieve a combination of melt blown and electrical field effects. This approach is more productive than the electrospinning process. In this way, we produced polypropylene microfibers about 40% finer than conventional melt-blown fiber, with an average diameter of 0.96 and a narrower fiber size distribution. The strength, pore size distribution, and filtration efficiency of conventional melt-blown fabrics and electrostatic-assisted melt-blown fabrics were tested. The results show that electrostatic-assisted melt-blown microfibers have better filtration efficiency, which may be used in air filtration.

This work was supported by a startup fund (2016) of the Qingdao University. 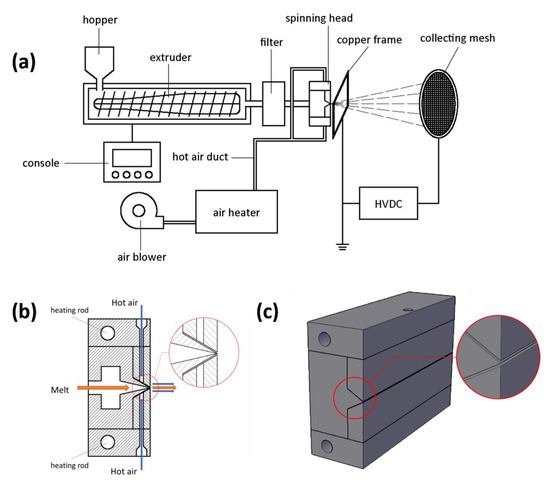 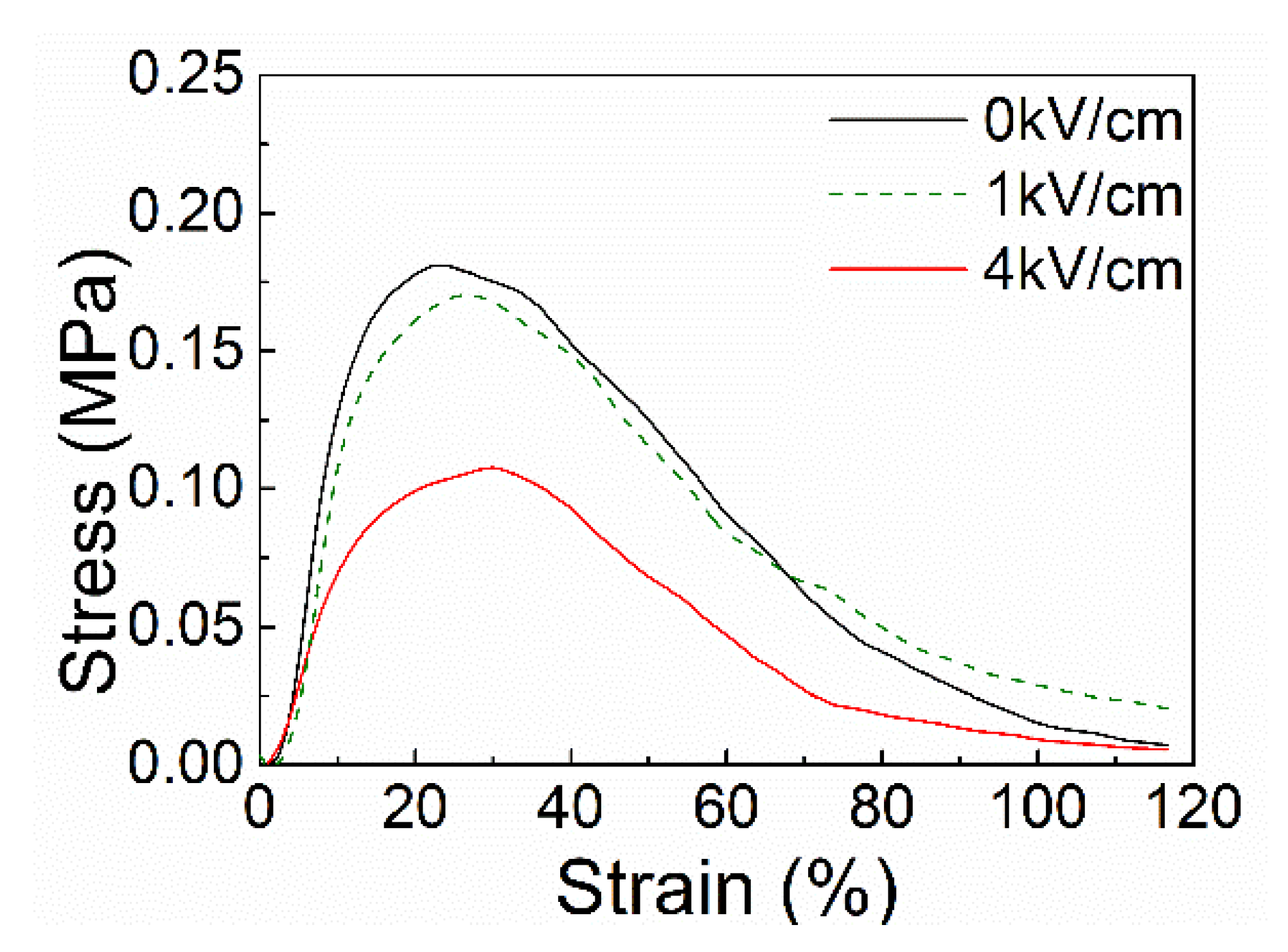 Table 1. Filtration efficiencies of different particle sizes.
Table 1. Filtration efficiencies of different particle sizes.
© 2018 by the authors. Licensee MDPI, Basel, Switzerland. This article is an open access article distributed under the terms and conditions of the Creative Commons Attribution (CC BY) license (http://creativecommons.org/licenses/by/4.0/).
We use cookies on our website to ensure you get the best experience. Read more about our cookies here.
Accept
We have just recently launched a new version of our website. Help us to further improve by taking part in this short 5 minute survey here. here.
Never show this again