Bamboo plastic composites have become a hot research topic and a key focus of research. However, many strong, polar, hydrophilic hydroxyl groups in bamboo flour (BF) results in poor interfacial compatibility between BF and hydrophobic polymers. Maleic anhydride-esterified (MAH-e-BF) and lactic acid-esterified bamboo flour (LA-e-BF) were prepared while using an in situ solid-phase esterification method with BF as the raw material and maleic anhydride or lactic acid as the esterifying agent. Fourier transform infrared spectroscopy results confirmed that BF esterification with maleic anhydride and lactic acid was successful, with the esterification degrees of MAH-e-BF and LA-e-BF at 21.04 ± 0.23% and 14.28 ± 0.17%, respectively. Esterified BF was characterized by scanning electron microscopy, contact angle testing, X-ray diffractometry, and thermogravimetric analysis. The results demonstrated that esterified BF surfaces were covered with graft polymer and the surface roughness and bonding degree of MAH-e-BF clearly larger than those of LA-e-BF. The hydrophobicity of esterified BF was significantly higher than BF and the hydrophobicity of MAH-e-BF was better than LA-e-BF. The crystalline structure of esterified BF showed some damage, while MAH-e-BF exhibited a greater decrease in crystallinity than LA-e-BF. Overall, the esterification reaction improved BF thermoplasticity, with the thermoplasticity of MAH-e-BF appearing to be better than LA-e-BF. View Full-Text
Keywords: bamboo flour; in situ solid phase method; esterification modification; substituting degree; hydrophobicity bamboo flour; in situ solid phase method; esterification modification; substituting degree; hydrophobicity
►▼ Show Figures 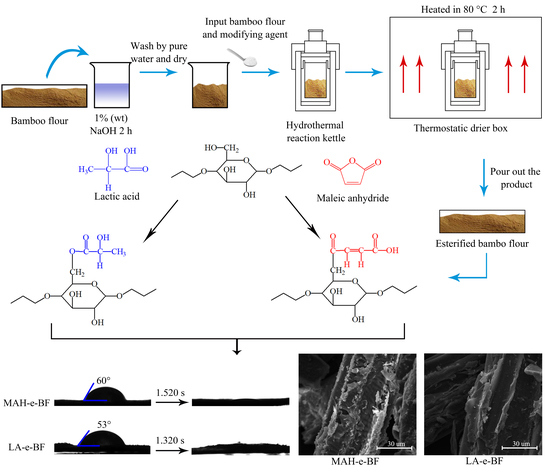