Facile and Rapid Formation of Giant Vesicles from Glass Beads

In this work a combined, multifunctional platform, which was devised for the simultaneous application of magnetic hyperthermia and the delivery of the antitumor drug gemcitabine, is described and tested in vitro. The system consists of magnetite particles embedded in a polymer envelope, designed to make them biocompatible, thanks to the presence of poly (ethylene glycol) in the polymer shell. The commercial particles, after thorough cleaning, are provided with carboxyl terminal groups, so that at physiological pH they present negative surface charge. This was proved by electrophoresis, and makes it possible to electrostatically adsorb gemcitabine hydrochloride, which is the active drug of the resulting nanostructure. Both electrophoresis and infrared spectroscopy are used to confirm the adsorption of the drug. The gemcitabine-loaded particles are tested regarding their ability to release it while heating the surroundings by magnetic hyperthermia, in principle their chances as antitumor agents. The release, with first-order kinetics, is found to be faster when carried out in a thermostated bath at 43 °C than at 37 °C, as expected. But, the main result of this investigation is that while the particles retain their hyperthermia response, with reasonably high heating power, they release the drug faster and with zeroth-order kinetics when they are maintained at 43 °C under the action of the alternating magnetic field used for hyperthermia. View Full-Text
Keywords: biocompatible polymer; drug delivery; gemcitabine; magnetic hyperthermia; magnetic nanoparticles biocompatible polymer; drug delivery; gemcitabine; magnetic hyperthermia; magnetic nanoparticles
►▼ Show Figures 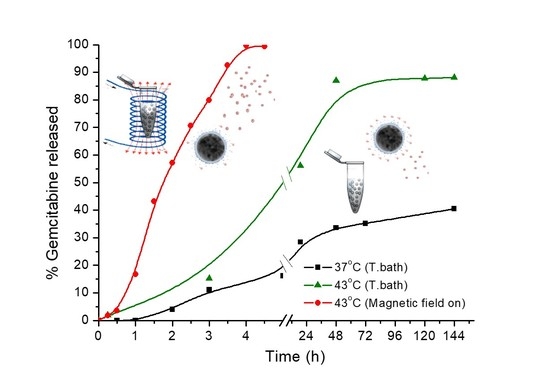