Transformation theory, succeeding in multiple transportation systems, has enlightened researchers to manipulate the field distribution by tailoring the medium’s dominant parameters in certain situations. Therefore, the science community has witnessed a boom in designing metamaterials, whose abnormal properties are induced by artificial structures rather than the components’ characteristics. However, a majority of such meta-devices are restricted to the particular physical regimes and cannot sense the changes taking place in the surrounding environment and adjust its functions accordingly. In this article we propose a multi-physics bi-functional “intelligent” meta-device which can switch its functions between an invisible cloak and a concentrator in both thermal and DC electric conduction as the ambient temperature or voltage varies. The shape memory alloys are utilized in the design to form a moveable part, which plays the crucial role in the switching effect. This work paves the way for a practicable method for obtaining a controllable gradient of heat or electric potential, and also provides guidance for efficiently designing similar intelligent meta-devices by referring to the intriguing property of shape memory alloys.
Keywords: multiple physics; bi-functional; meta-device; shape memory alloy multiple physics; bi-functional; meta-device; shape memory alloy

Controlling the spatial distribution of the physical fields at will is an exciting challenge for human beings, which not only leads to vital progress in understanding the underlying mechanism of specific phenomena but also to great values of applications in improving our daily life. In 2006, Leonhardt and Pendry et al. [1,2] propose a concept named transformation theory, which implies a practicable method to build an invisible cloak based on the fact that Maxwell equations can retain their forms invariant under a coordinate transformation. This advancement has shed a light on the design of metamaterials, which are a sort of artificial materials possessing intriguing properties originating from their special structures rather than their intrinsic characteristics and therefore has been rapidly theoretically generalized and applied to different physical fields such as electromagnetic [3,4,5,6], and acoustics [7]. Due to the Laplace equation holding the same form in different coordinate systems, the transformation theory can be easily extended to the conduction regime, helping to achieve the thermal cloaking effect by using inhomogeneous and anisotropic mediums [8,9,10,11,12,13,14,15,16]. Similar to the optical cloak, this type of conduction metamaterial can ensure that the object inside a cloak area does not affect the temperature gradient outside. This property can be used to design a sort of non-invasive sensor which is much more precise for checking the temperature of an arbitrary point in the device by expanding the uniform temperature region without distorting the temperature distributions. From then on, the science community has witnessed a boom in designing thermal metamaterials with different functions [9,10,17,18,19,20,21], including converters [10], and concentrators [9,10,22,23,24], which is of potential for fabricating the non-invasive parts in a bigger installation to enhance the efficiency of the thermoelectric effect by increasing the local temperature gradient inside without disturbing the temperature gradient outside [25].
Due to the same forms of dominant equations in both direct currency electrical conduction and the thermal diffusion processes, Li et al. [17] first explored whether a same structure can realize a cloaking effect in these two fields simultaneously. Then, in 2014, Moccia et al. [26] experimentally constructed a multi-physics cloak that breaks the limitation that the metamaterials devices can only serve a single functionality in a given physical domain [27,28]. Although all these works try to fabricate metamaterials that can be applicable in multiple physical fields, a design of a meta-device that can not only work in multi-physical domains but also can automatically switch from one function to another as the environmental parameter changes, has still not been proposed. In this article, we try to solve the problem and provide a method to build such an intelligent bi-functional meta-device that can work in both thermal conduction and DC electric conduction situations by utilizing the shape memory alloys (SMAs) [29,30,31]. Due to its special lattice structure, owing to the solid-solid transition, the shape memory alloy (SMA) will switch from its original figure to a deformed figure as it is heated or cooled. There are three most popular polycrystalline SMAs which are NiTi, CuZnAl and CuAlNi [32]. Here we will choose NiTi to prepare our design and experimental demonstration. This attribute can provide us a method for obtaining two different shape stats by adjusting the temperature. As a result, through this manipulation we can produce a unique class of intelligent thermal or electrical metamaterials which permit the device to automatically alter from a thermal/electrical cloak to a concentrator or vice versa, as the ambient temperature varies.

One may find the values of the of different metals are not strictly equivalent as implicated by Wiedemann-Franz law, and due to the mismatch of the thermal and the electrical conductivities one may also worry about that the device consisting of these materials cannot perform perfectly in both thermal and electric fields. This fact has been mentioned by Yang et al. [28] before. In that paper, they point out a method to solve the problem by mixing another material with a higher value of on the interface. In our design, the PMDS works as the high ratio material. In addition, it is unnecessary to achieve a perfect cloak, in which the constant . If is small enough, there are no detectable distortions of the field outside the device. Therefore, the tolerance of the conductivities’ mismatching is actually much higher. As observed from the simulation results, this mismatch has little effect on our design.
What is more, the ratio of will also be affected by the temperature difference. To illustrate this effect, we give the contour distributions at different temperature differences. In Figure 5a,b, the red lines denote the isothermal lines in the same cloak device at different temperature differences: (a) is 50 K; (b) is 200 K. As the references, the blue lines indicate the electric equipotential lines and the potential difference between the two edges of the device is set as 1 V in both (a) and (b). As the temperature difference increase to 200 K, the obvious divergences between the two contours start to appear. Similarly, comparing to the differences between the red lines and blue ones in Figure 5c,d, the same results can also be observed in the concentrator state. Intriguingly, the divergences cannot be detected in regions 1 and 2 for the cloaking case. Taking account of no flux can enter into the region 4 and region 1, 2 are made of a whole copper plate, it implies that this distortion is induced by the coupling of different metals. However, according to the simulation results, the affections of the temperature do not have a significant impact on the functionality of the device.
To sum up, in this article we have extended the bi-functional devices from the thermal field to the multiple physics field. We have proposed the desired conductivities to achieve a type of metamaterial that permits a device to sense the variation of the ambient temperature or electric potential field and altering between a cloak and a concentrator. Practical design to realize this function switching effect in both thermal and DC electrical conduction by utilizing the shape memory alloys are also given. In addition, the performance of our design can be confirmed by the finite element simulations. If one can impose a uniform surface potential source on the device’s boundary and the SMA slices’ straight state can be improved to provide robust connections between different regions, the experiment can be further performed.

This research was funded by National Natural Science Foundation of China grant number 11725521.

We acknowledge Li Ying for the discussion.

All the authors declare no conflicts of interest. The funders had no role in the design of the study; in the collection, analyses, or interpretation of data; in the writing of the manuscript, or in the decision to publish the results. 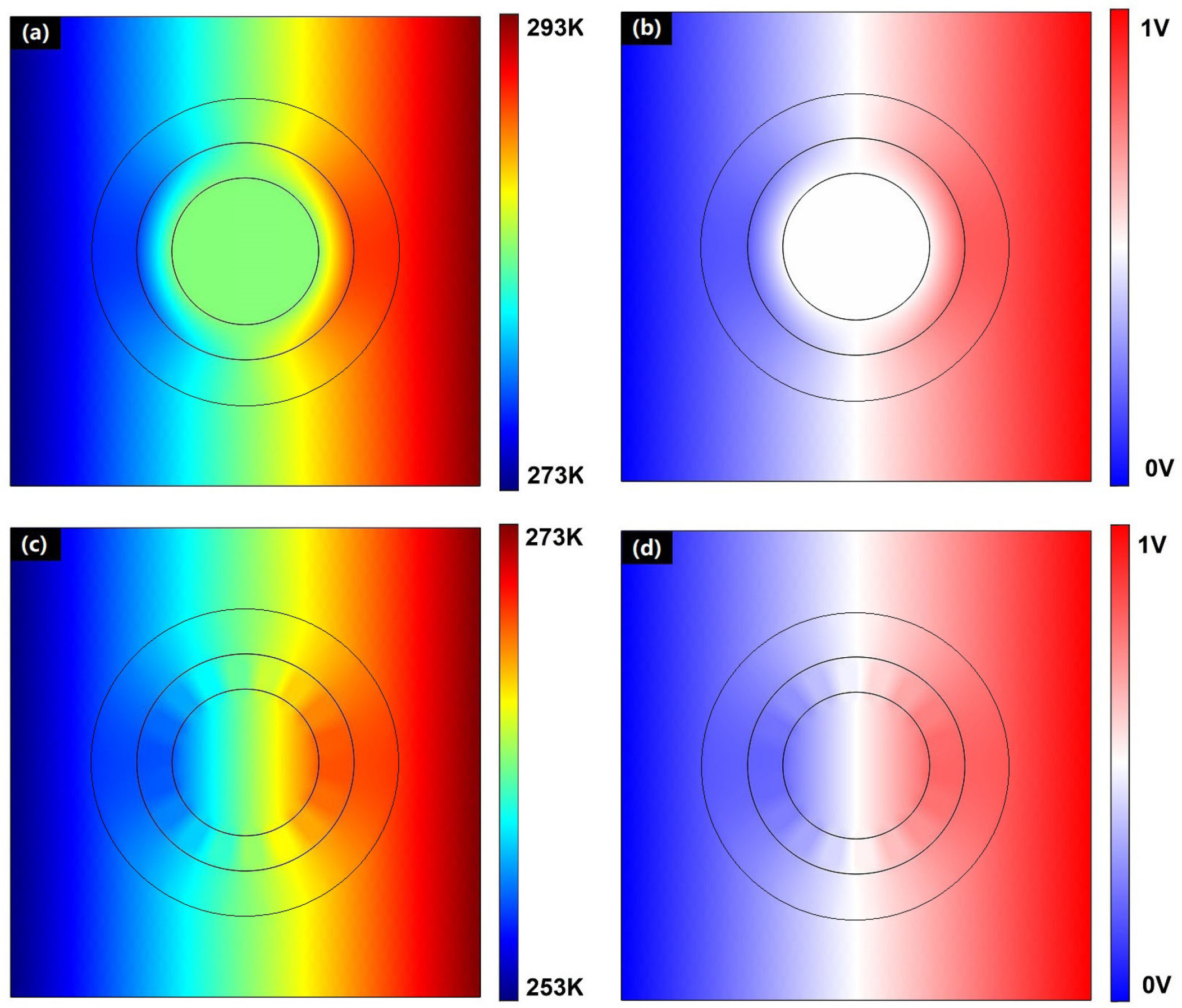 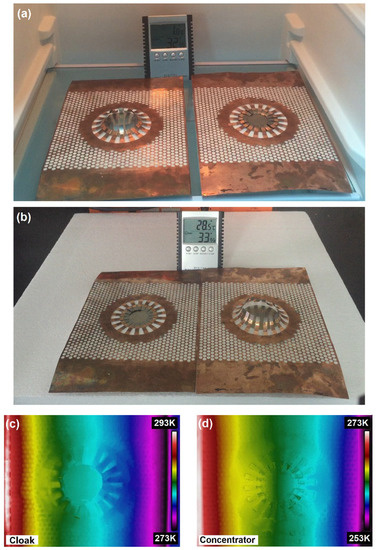 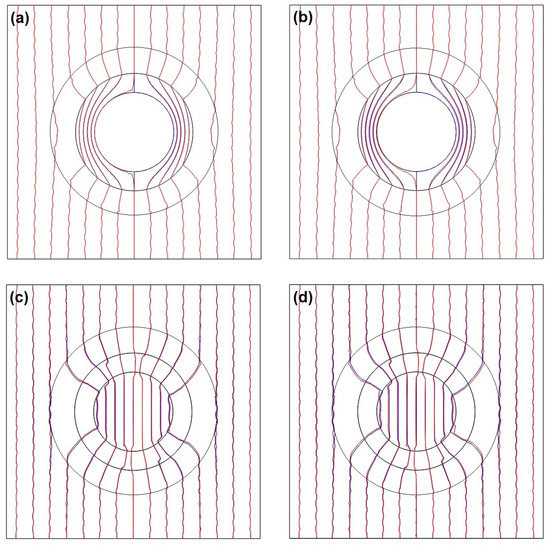 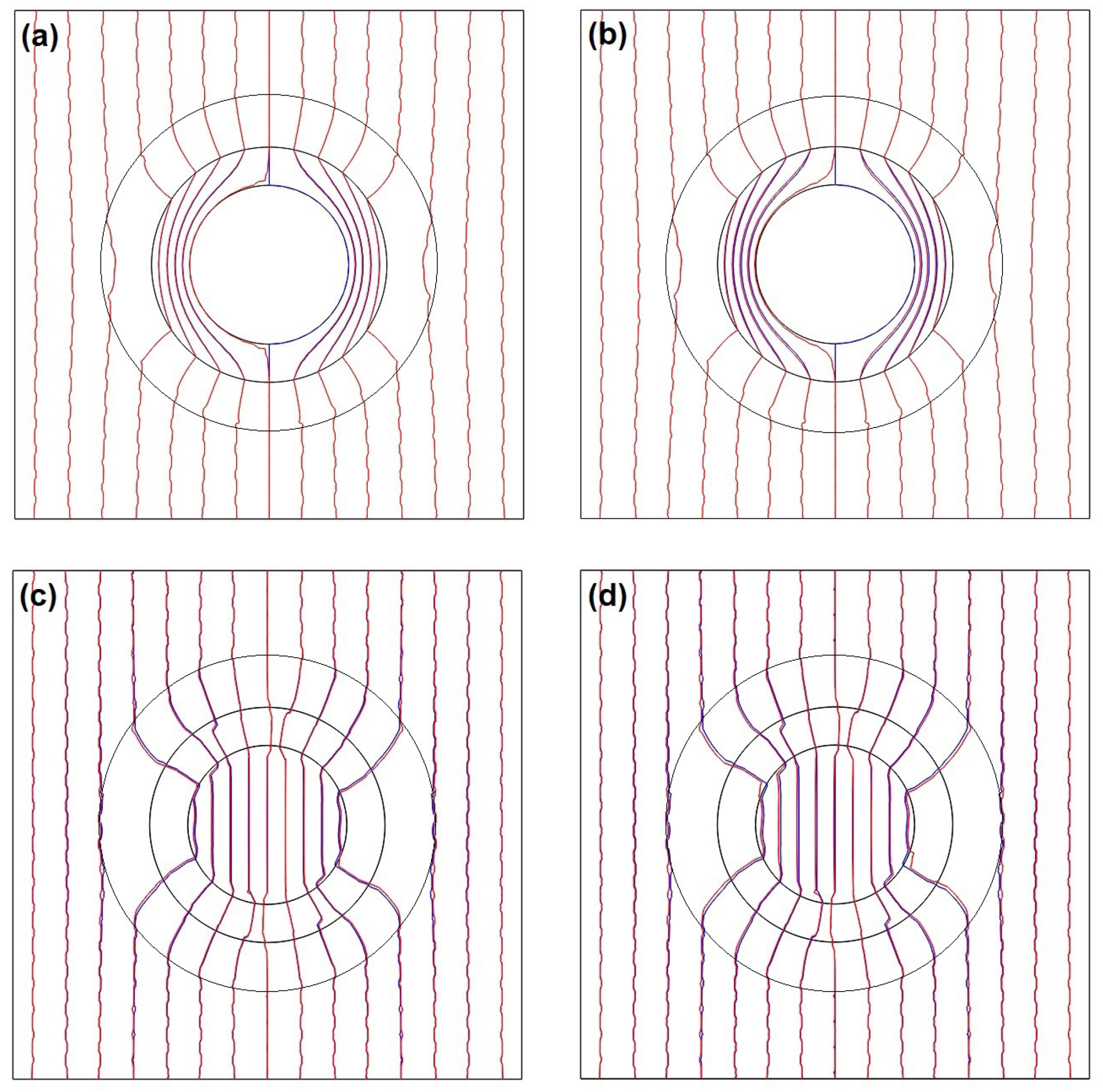