Theoretical Study of the Electronic, Magnetic, Mechanical and Thermodynamic Properties of the Spin Gapless Semiconductor CoFeMnSi
Previous Article in Journal

Symmetric Fluoroborate and its Boron Modification: Crystal and Electronic Structures

Understanding intermolecular interactions in crystals of molecular ions continues to be difficult. On the one hand, the analysis of interactions from the point of view of formal charges of molecules, similarly as it is commonly done for inorganic ionic crystals, should be performed. On the other hand, when various functional groups are present in the crystal, it becomes natural to look at the interactions from the point of view of hydrogen bonding, π…π stacking and many other kinds of non-covalent atom–atom bonding. Often, these two approaches seem to lead to conflicting conclusions. On the basis of experimental charge densities of cytosinium chloride, adeninium chloride hemihydrate, and guanine dichloride crystals, with the help of theoretical simulations, we have deeply analysed intermolecular interactions among protonated nucleobases, chloride anions and water molecules. Here, in the second paper of the series of the two (Kumar et al., 2018, IUCrJ 5, 449–469), we focus on applying the above two approaches to the large set of dimers identified in analysed crystals. To understand electrostatic interactions, we analysed electrostatic interaction energies (Ees) computed directly from molecular charge densities and contrasted them with energies computed only from net molecular charges, or from a sum of electric multipolar moments, to find the charge penetration contribution to Ees. To characterize non-covalent interactions we performed topological analyses of crystal electron densities and estimated their interaction energies (EEML) from properties of intermolecular bond critical points. We show that the overall crystal architecture of the studied compounds is governed by the tight packing principle and strong electrostatic attractions and repulsions between ions. Many ions are oriented to each other in a way to strengthen attractive electrostatic interactions or weaken strong repulsion, but not all of them. Numerous bond critical points and bond paths were found between ions, including nucleobase cations despite their overall repulsive interactions. It is clear there is no correlation between EEML and Ees. However, strong relation between EEML and the charge penetration component of Ees is observed. The relation holds regardless of interaction types or whether or not interacting molecules bear the same or opposite charges. Thus, a charge density-based approach for computing intermolecular interaction energies and the atom–atom approach to analyse non-covalent interactions do complement each other, even in ionic systems. View Full-Text
Keywords: charge density; quantum crystallography; protonated nucleobase; electrostatic interaction energy; charge penetration; QTAIM; bond critical point charge density; quantum crystallography; protonated nucleobase; electrostatic interaction energy; charge penetration; QTAIM; bond critical point
►▼ Show Figures 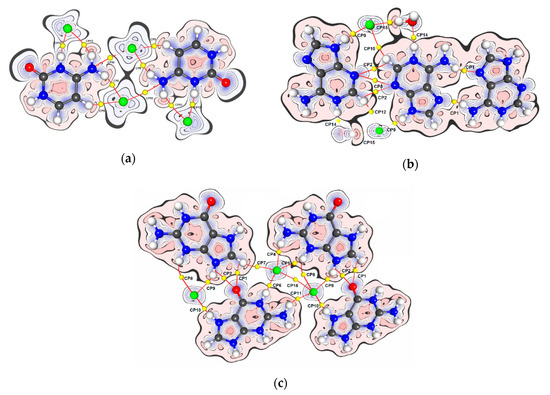