Electric-Potential-Assisted Crystallisation of L-Isoleucine: A Study of Nucleation Kinetics and Its Associated Parameters
Previous Article in Special Issue

The Freedericksz Transition in a Spatially Varying Magnetic Field

The twist-bend nematic phase (NTB) exhibits a complicated hierarchy of structures responsible for several intriguing properties presented here. These are: the observation of a fast electrooptic response, the exhibition of a large electroclinic effect, and the observation of an unusual pattern of the temperature dependence of birefringence of bent-shaped bimesogens in parallel-rubbed planar-aligned cells. These unusual effects inspired the use of highly sophisticated techniques that led to the discovery of the twist-bend nematic phase. Results of the optical retardation of a parallel-rubbed planar-aligned cell show that the ‘heliconical angle’ (the angle the local director makes with the optical axis) starts increasing in the high temperature N phase, it exhibits a jump at the N–NTB transition temperature and continues to increase in magnitude with a further reduction in temperature. The liquid crystalline parallel-rubbed planar-aligned and twist-aligned cells in this phase exhibit fascinating phenomena such as a demonstration of the beautiful stripes and dependence of their periodicity on temperature. The Fréedericksz transition in the NTB phase is found to be of the first order both in rubbed planar and homeotropic-aligned cells, in contrast to the second order transition exhibited by a conventional nematic phase. This transition shows a significant hysteresis as well as an abrupt change in the orientation of the director as a function of the applied electric field. Hierarchical structures are revealed using the technique of polymer templating the structure of the liquid crystalline phase of interest, and imaging of the resulting structure by scanning electron microscopy. View Full-Text
Keywords: twist-bend nematic phase; nematic liquid crystals; stripe textures; Fréedericksz transition; optical retardation; birefringence twist-bend nematic phase; nematic liquid crystals; stripe textures; Fréedericksz transition; optical retardation; birefringence
►▼ Show Figures 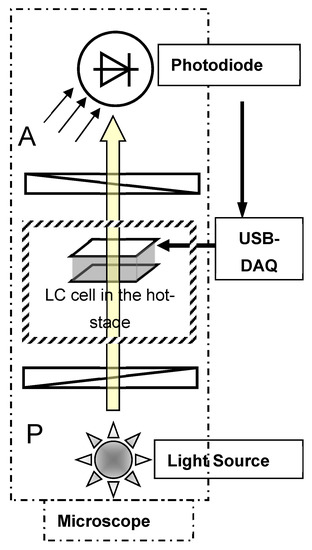 Vitaly P. Panov
Dr Vitaly Panov graduated from Moscow Institute of Physics and Technology. He obtained his PhD degree from the University of Dublin, Trinity College Dublin, Ireland. He is currently a Research Professor in Sungkyunkwan University, Republic of Korea.
Zoom | Orient | As Lines | As Sticks | As Cartoon | As Surface | Previous Scene | Next Scene
We use cookies on our website to ensure you get the best experience. Read more about our cookies here.
Accept
We have just recently launched a new version of our website. Help us to further improve by taking part in this short 5 minute survey here. here.
Never show this again