Article
The Electric and Dielectric Properties of SrF2:Tb3+ Nanocrystals Revealed by AC Impedance Spectroscopy
by

Nanomaterials attract particular interest due to their unique physical and chemical properties [1,2,3,4,5,6,7,8]. It is well known that the unique properties are mainly from their grain boundary and interface. The study on the grain boundary and interface properties of nanomaterials is very important. AC impedance spectroscopy is a powerful method which can give out the transport property of grain and grain boundary individually [9,10,11]. Therefore, the investigation of AC impedance spectroscopy on nanomaterials is very attractive and necessary.
SrF2 is a potential material used as the electrolyte of solid batteries [12]; therefore, how to improve its carrier conduction is an attractive and necessary subject. Many studies had modulated the electric and dielectric properties SrF2 through the rare earth doping [13,14,15,16]. Fedorov et al. measured the conductivity of single crystal SrF2 with the rare earth doping [15]; it was found that with the increasing of the rare earth doping concentration up to about 0.05–0.15, the conductivity increases sharply; then the conductivity increases slightly with the further concentration increasing. Réau et al. studied the electrical properties of rare earth doped SrF2 polycrystalline and found that the conductivity of the sample firstly increases with the doping concentration increasing and then decreases [16]. Synthesis of the nanoscale sample is also an effective method used to improve the material carrier conduction. The study on the electrical transport property of nanostructure rare earth doped SrF2 is important and necessary. However, few works have been conducted on the electric and dielectric properties SrF2 nanocrystals. In this letter, the electric and dielectric properties of SrF2 nanocrystals with different Tb-doped concentration were investigated by AC impedance spectroscopy. The resistances of grain and grain boundary were given out and the complex permittivity was obtained. The carrier transport mechanism was discussed.

The sample was synthesized as illustrated in previous works [17,18,19,20]. The brief synthesis procedure is as following: the oleic acid, ethanol and sodium hydroxide were mixed and stirred for 10 min; the strontium nitrate/terbium nitrate dissolved in water was put into the above solution and stirred for 10 min; the sodium fluoride was added and stirred for 60 min; then the solution was put into a high-pressure reactor and kept at 180 °C for 24 h; the reactants were collected with cyclohexane, then washed by alcohol and water, and finally dried at 80 °C. The Tb-doped concentration was 2, 4, 6, 8, 10 mol%. The TEM was measured by JEM-2010HR. The EDS was measured by JSM-7800F. The XRD was measured by MXP-18. The AC impedance spectroscopy was measured by Solartron 1260 impedance analyzer with Solartron 1296 dielectric interface. The electrode and sample chamber were described in our previous studies [21,22].

The XRD, EDS and TEM results are shown in Figure 1, Figure 2 and Figure 3. It can be seen all the XRD patterns can be indexed as the cubic SrF2 structure (JCPDS Card No. 06-0262). The EDS results indicate the Tb3+ was doped into SrF2 crystal lattice. The TEM results exhibit all the samples are near-spherical shape and the particle diameter is about 20 ± 4 nm.
The complex impedance spectra of SrF2:Tb3+ nanocrystals were shown in Figure 4. It can be seen that the shape of Tb-doped spectra is similar to that of un-doped result. According to our previous analysis process [23,24], the charge carriers includes both electron and ion; all the spectra were simulated by the equivalent circuit as the inset of Figure 4. The grain and grain boundary resistances of SrF2 nanocrystals with different Tb doping concentrations were obtained and shown in Figure 5. It can be seen that both the grain and grain boundary resistances decrease with the Tb-doping concentration up to 6% and then increase. The valences of Tb3+ and Sr2+ are different; the Tb doping leads to the interstitial F− quantity increases, meanwhile Tb-doping decreases the activation enthalpy of carriers’s transport. These finally cause the decreases of grain and grain boundary resistances. When the Tb-doped concentration is larger than 6%, some defects aggregate into clusters and the interstitial F− quantity participated in the conduction process does not increase anymore. The deformation potential scattering increases with the Tb doping concentrations increasing and its effect on the carrier transport becomes dominant. These result in the increases of grain and grain boundary resistances.
Comparing with previous reports [15,16], it can be concluded that to the single crystal and polycrystalline samples, the charge carrier is only ion; while to our nanocrystal sample, the charge carrier includes both electron and ion. To the single crystal sample [15], the conduction increases sharply at first; then the conduction increases slightly with the further the rare earth doping concentration increasing. While to the polycrystalline [16] and our nanocrystal samples, the conduction increases firstly and then decreases with the doping concentration increasing. Therefore, the carrier transport property variation of our nanocrystal sample with different doping concentration is more similar to that of the polycrystalline.
To get a deep understanding about the carrier transport mechanism, the complex permittivity was also investigated. The real part (ε′) and imaginary part (ε″) of permittivity were shown in Figure 6. It can be seen that ε′ decreases sharply with the frequency increasing then decreases flatly and finally increases. ε″ decreases with the frequency increasing and then increases. The strong dispersion of the permittivity in the low frequency indicates that the carrier was hopping in the transport process [25]. From the permittivity results, it can be deduced that the ε′ and ε″ values in the low frequency decrease as the sample resistance increases. With the Tb-doping concentration increasing, the interstitial F− quantity increases and the activation enthalpy decreases, these lead to the increases of the carrier quantity and hopping probability; and finally result in the increases of ε′ and ε″. When the doping concentration is higher than 6%, the defects aggregate into clusters and the interstitial F− quantity involved in the conduction does not increase anymore; the increase of deformation potential scattering causes the carrier hopping more difficult and the decreases of ε′ and ε″. 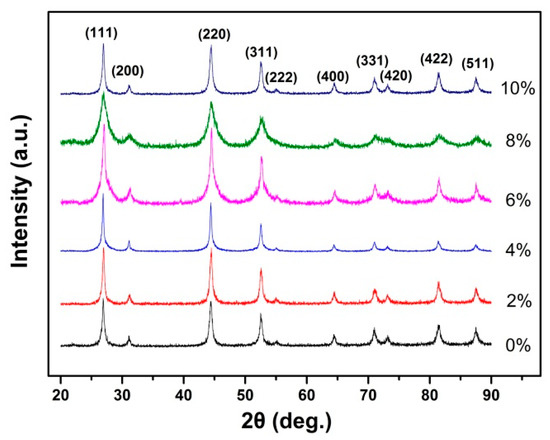 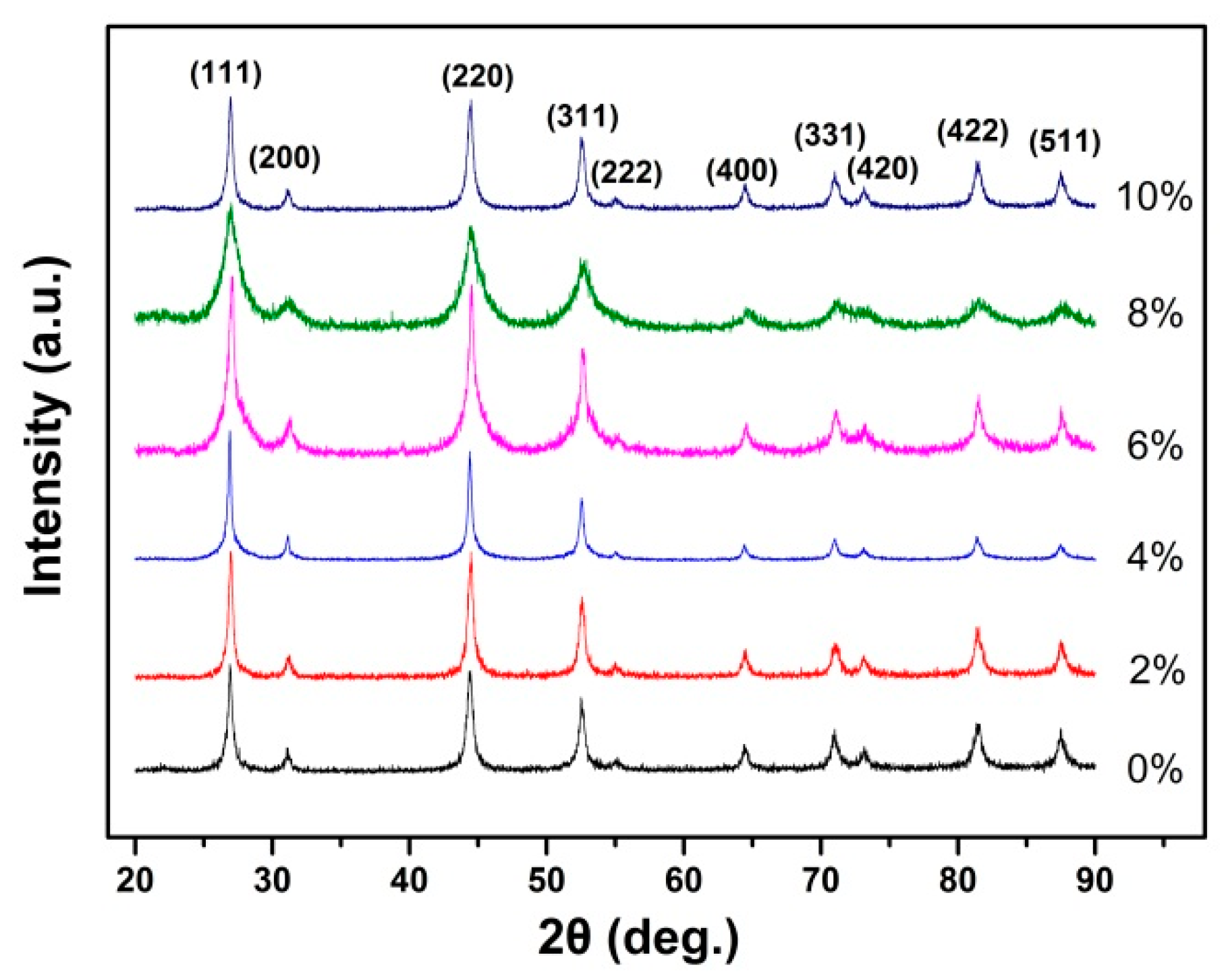 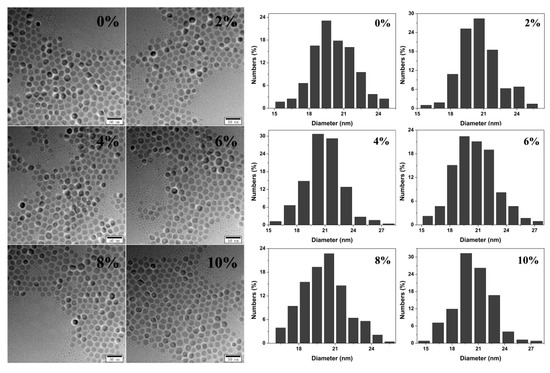 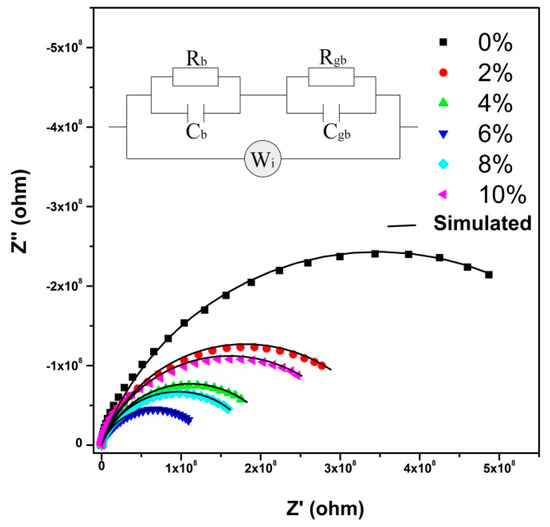 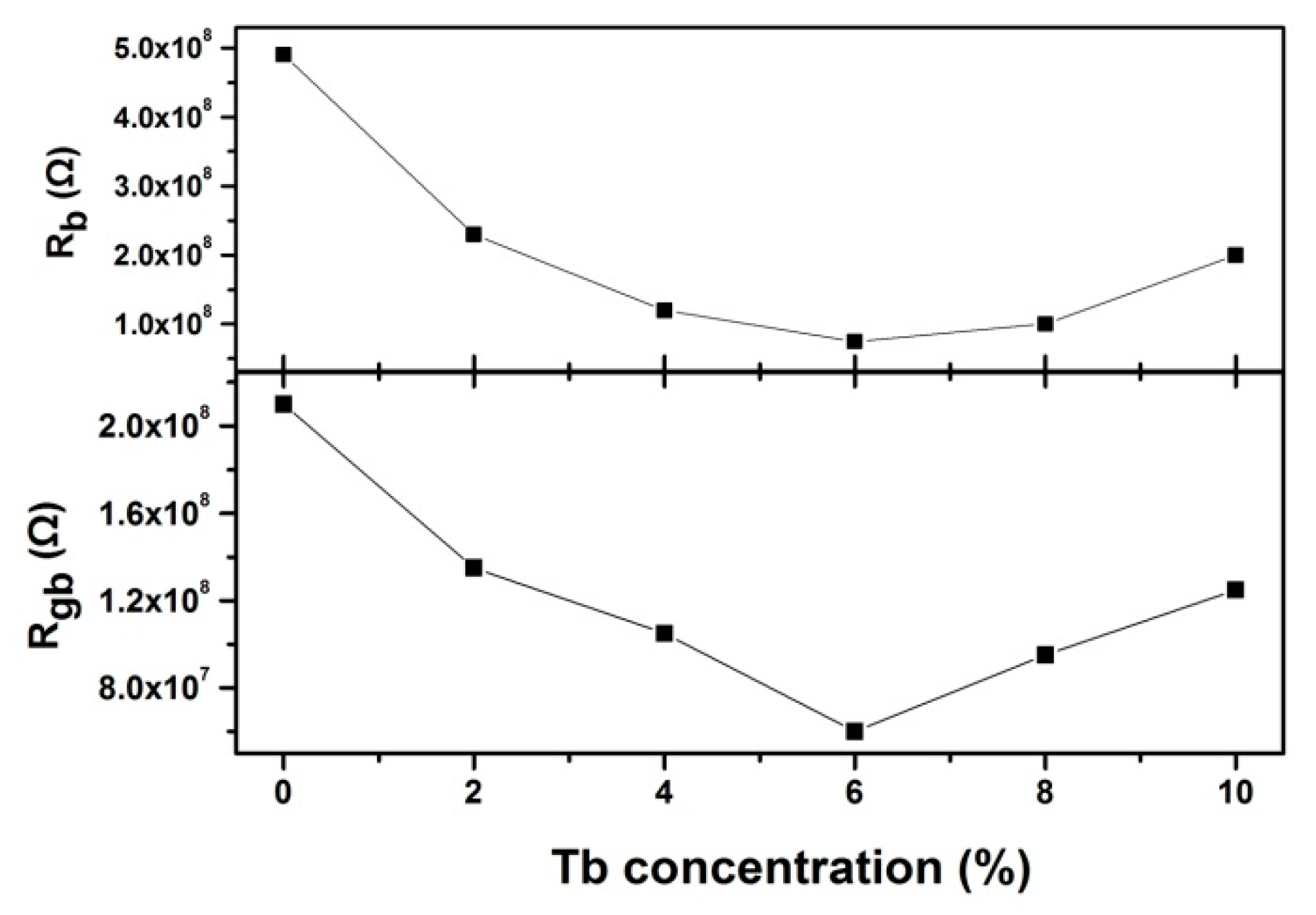 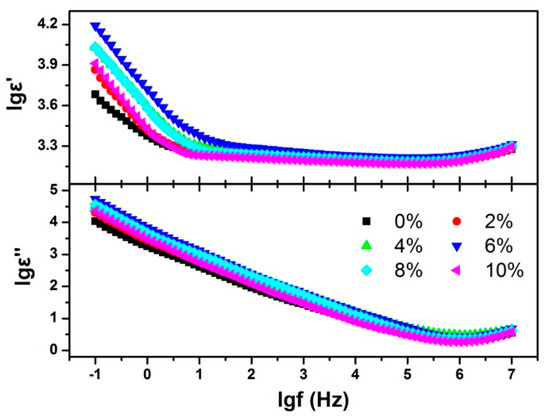