Methyl-3-aminothiophene-2-carboxylate (matc) is a significantly important intermediate in pharmaceutical products such as anti-hypertensives [1,2], antitumors [3], anti-HIV-1 integrase [4], human cytomegalovirus inhibitors [5], hepatitis C virus inhibitors [6], Xa factor inhibitors [7], antineoplastic PAK4 activase inhibitors [8], phosphatidylinositol 3-kinase PI3K inhibitors [9], and antithrombotic activity drugs [10]. It is also a key starting material in agrochemical products, providing herbicidal protection through thiafulone or the sulfonylurea herbicide [11]. Moreover, compounds containing thiophene can serve as crucial precursors for a variety of functional materials of luminescence, redox, non-linear optical discoloration, and electronic transport, owing to their highly photophysical properties [10,12]. In addition, it is worth noting that it can be used as the starting material to obtain various thiophenic structures [11,13] with extremely reactive properties. Although matc is of academic and practical interest, its molecular structure is still unclear, to the best of our knowledge.
The melting point of matc is about 63–64 °C [14]. Thus, it is in the solid state at room temperature, which favors the determination of the crystal structure. In view of its crucial role, we reported herein the crystal structure and hydrogen bonds of matc using X-ray crystallography, which is the key to understanding the functions and properties of organic molecules. Based on the experimental results, a Hirshfeld surface and a fingerprint plot were generated to explore the intermolecular interactions in the crystalline structure, while the reduced density gradient (RDG) was calculated to analyze the intermolecular interaction in the matc trimer. On the other hand, the significant local extrema of electrostatic potential (ESP) on the vdW surface and the composition of HOMO and LUMO were analyzed to point out the attack sites of nucleophilic and electrophilic reactions. We hope that our results can provide some basis for the deeper understanding of matc.

Commercial matc was dissolved in ethanol, and then the obtained solution was filtered for slow evaporation at 25 °C. After one day, yellow sticked-shape crystals were examined under an optical microscope and collected.
Crystal diffraction data were collected on a Rigaku XtaLAB synergy four-circle diffractometer (Rigaku Corporation, Japan) with CuKα (λ = 1.54184) radiation. Absorption corrections were applied by the CrysAlis PRO softeware (Rigaku Oxford Diffraction, 2015, Yarnton, UK) [15] for data reduction and analysis. Crystal structures were solved by direct methods and refined by the full-matrix least-squares method on F2 using SHELXL-2016 (University of Göttingen, Version 2016, Germany) [16] algorithms in Olex2 (Durham University, 2009, UK) [17]. All non-hydrogen atoms were refined with anisotropic displacement parameters. The positions of the H-atoms of NH2 and methyl groups were identified in difference Fourier maps with Uiso(H) = 1.2Ueq(N) and Uiso(H) = 1.5Ueq(C), and those of the ring were geometrically refined using a riding model with Uiso(H) = 1.2Ueq(C). The structure refinement parameters are summarized in Table 1. In addition, the as-synthesized solid samples were also analyzed using powder X-ray diffraction to ensure that no polymorphic transformations occurred.

The experimentally determined crystal structure was used as the initial geometry for Density Functional Theory (DFT) calculation, using the Gaussian 09 program package (Gaussian Inc., revision D.01, Wallingford, USA) [18] in the gas phase. The three-dimensional Hirshfeld surfaces [19] and two-dimensional fingerprint plots [20] of the structures were obtained by using the CrystalExplorer 17.5 software (The University of Western Australia, Version 17.5, Perth, Australia) [21]. The intermolecular interaction energy for the cluster with a radius of 3.8 Å around the central molecule was performed by the CrystalExplorer 17.5 software with embedded B3LYP/6-31G** level. In order to deeply analyze structure and excitation characteristics, the geometry optimization of the matc monomer was carried out at the B3LYP/def-2TZVP level. The evaluation of ESP distribution, the calculation of orbital composition, and the variety of electron density difference were made via the Multiwfn 3.7 program (Beijing Kein Research Center for Natural Sciences, Version 3.7, Beijing, China) [22]. Additionally, the reduced density gradient (RDG) analysis, the isosurface of molecular orbital, and the ESP-mapped vdW surface were rendered using the VMD 1.9.1 program (University of Illinois and Beckman Institute, Version 1.9.1, Urbana, USA) [23].

Crystal structural determination revealed that matc crystallizes in the monoclinic crystal system P21/c space group. Its asymmetric unit consists of three crystallographically independent matc molecules, as depicted in Figure 1. Generally, The C=O groups were located in the same plane as the ring, and all of the C–S, C–N, and C–O bond lengths fell within the ranges of 1.7113(19)–1.7395(16), 1.347(2)–1.354(2), and 1.344(2)–1.446(2) Å, respectively. All three matc molecules were almost structurally identical, and only a very slight difference was found (Tables S1 and S2, See Supplementary Materials). Amongst them, deviations on the bond distances and angles of the N–H and C–H groups were obvious due to the difference in the refining method, and the largest distance between analogous atoms in superimposed molecules was about 0.063 Å. Additionally, the C=O bond lengths were 1.226(2), 1.222(2), and 1.219(2) Å, respectively, due to the strong hydrogen bonds. A simple survey revealed that the related compounds [24,25,26] containing the 3-methoxy-2-thiophenamine fragment often had the intramolecular N–H⋯O hydrogen bond, forming a seven-membered ring. This is a benefit due to the amine and carbonyl groups that are on the same side as thiophene. The strong N–H⋯O and N–H⋯N hydrogen bond interaction, as shown in Figure 2 and Table 2, was responsible for the crystal packing. All of the three molecules in the asymmetric unit exhibited an S(6) motif by an intramolecular N–H⋯O–C hydrogen bond. These three molecules were further linked together by two intermolecular N–H⋯O hydrogen bonds and one N–H⋯N hydrogen bond, leading to the three common D motifs. Hence, the first-level graph set was DDDS(6)S(6)S(6). Based on the intermolecular N–H⋯O hydrogen bonds, the basic motif in this structure was an infinite chain including all three crystallographically independent molecules. Intermolecular N–H⋯N interaction joined this helical chain with a similar helical chain into a double chain running in the b-axis direction (Figure S1). Further, a weak C–H⋯S contact with a distance of 3.5794(18) Å between C and S atoms, along with C–H⋯Cg interactions, stabilized the crystal 3-D packing (Table 2 and Figure S1), where Cg is the centroid of the thiophene ring.

To analyze weak interactions, the reduced density gradient (RDG) is a popular method [35]. The configuration of a trimer including three matc molecules was optimized at the B3LYP/6-31G* level and analyzed. In Figure 6, the more blue isosurface indicates the stronger hydrogen bonds, while the more red isosurface reveals the larger steric effect, and the green isosurface corresponds to a weak van der Waals interaction. In Figure 6b, a red shuttle-shaped region in the middle of the ring reflects the strong steric hindrance effect, corresponding to the red spike of the scatter plot in Figure 6a. On the RDG isosurface, the blue color between the carboxyl and amino groups of a neighboring molecule implies the formation of an intermolecular N–H⋯O hydrogen bond. Similarly, the formation of N–H⋯N hydrogen bonds can also be seen in the adjacent area. This is in agreement with the determined crystal structure. The color between the carboxyl group oxygen (O) and ring hydrogen (H) of a neighboring molecule is a large area of green flat plate, which embodies the role of van der Waals interactions and intermolecular C–H⋯O contacts.
The intramolecular interactions are also vividly exhibited. The color between the oxygen atom of the carboxyl group and the hydrogen atom of the amino group is half-blue and half-brown, and indicates a weak intramolecular N–H⋯O hydrogen bond and steric hindrance effect. This is also found in the crystal structure of matc. Obviously, amino groups in the matc structure mainly participate in the formation of various interactions in the trimeric unit, and they are generally taken as a starting material for the design of a new inhibitor.

The electrostatic potential (ESP) is a very convenient descriptor for understanding sites of electrophilic and nucleophilic reactions and intermolecular interactions [36,37,38]. Figure 7 provides the ESP-mapped vdW surface and surface extrema. The red region indicates the possible site for electrophilic attack, while the blue region for nucleophilic attack. Additionally, it can be seen that the global surface minimum value (−32.64 kcal/mol) was found at the oxygen atom of the carboxyl group, indicating the most favorable site for the positively charged species and the most possible acceptor. Meanwhile, the global surface maximum (39.36 kcal/mol) is about the hydrogen atoms of the amino group, corresponding to the stronger ability to attract negatively charged atoms and to the most possible donor. This observation clearly explained the reason why carboxyl and amino groups could form H-bonds prior to the other group in the matc crystal structure.
The HOMO (highest occupied molecular orbital) and LUMO (lowest unoccupied molecular orbital) are essential in predicting the chemical stability of a molecule [39,40,41]. As seen from Figure S3, both the HOMO and LUMO are mainly delocalized over the thiophene ring and constitute a highly delocalized π bond. The nitrogen atoms of the amino group had a contribution of 27.9% to HOMO, while the carbon atoms of the carboxyl group had a contribution of 14.3% to LUMO. The HOMO–LUMO gap was about 4.537 eV, which implies that matc has a low kinetic stability and a high chemical reactivity.

Matc attracted considerable attention in the past many years due to its significant pharmacological activities and photophysical properties, and thus its structure is important for understanding the role of matc in various chemical processes. Our results identified that matc crystallizes in the P21/c space group, and that the N–H⋯O and N–H⋯N hydrogen bond interactions, along with other weak interactions, stabilize the crystal packing. This fact is further verified by the three-dimensional Hirshfeld surface, two-dimensional fingerprint plot analysis, and reduced density gradient (RDG). The three-dimensional energy-framework analyses clearly indicated that the dispersion interaction energy is predominantly interaction energy. The amino and carboxyl groups participate in various types of intermolecular and intramolecular interactions. The HOMO–LUMO gap implies that matc has a low kinetic stability and a high chemical reactivity.

The following are available online at https://www.mdpi.com/2073-4352/10/1/19/s1. Table S1 selected bond distances of matc; Table S2 selected bond angles of matc; Figure S1: (a) a view of the strong hydrogen-bonds along the b axis in matc; (b) weak interactions in the asymmetric unit of matc; Figure S2: two-dimensional fingerprint plots with decomposition of each intermolecular contacts in matc; Figure S3: contour plots and energies of HOMO and LUMO of matc.

The authors state that there are no conflicts of interest. 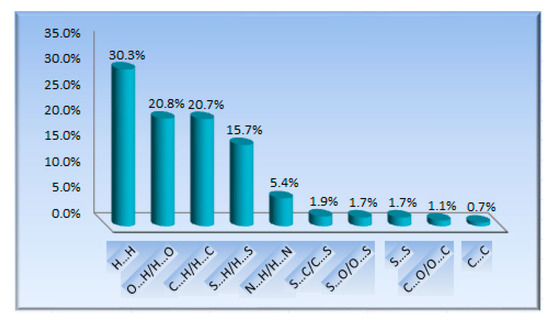 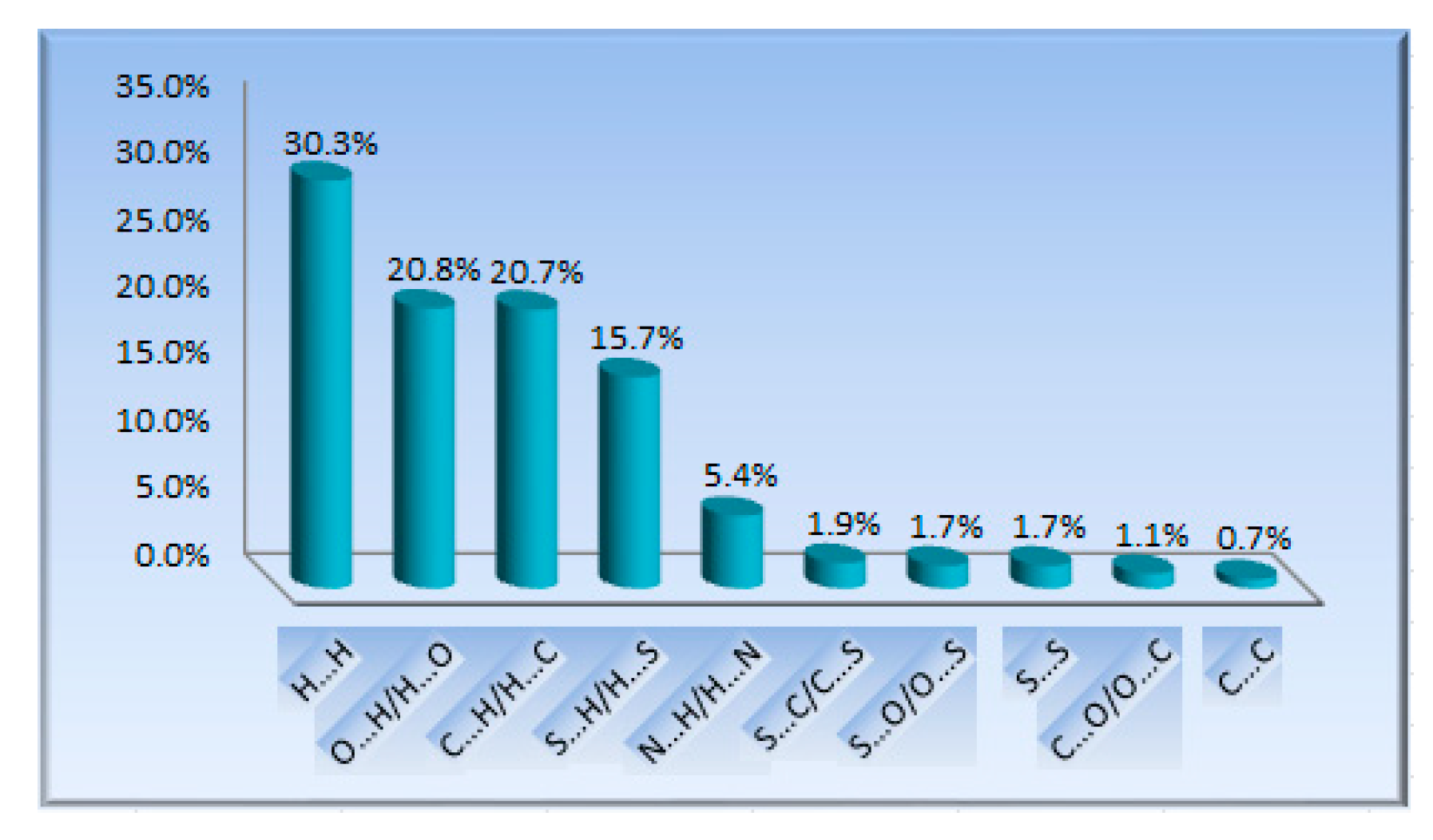 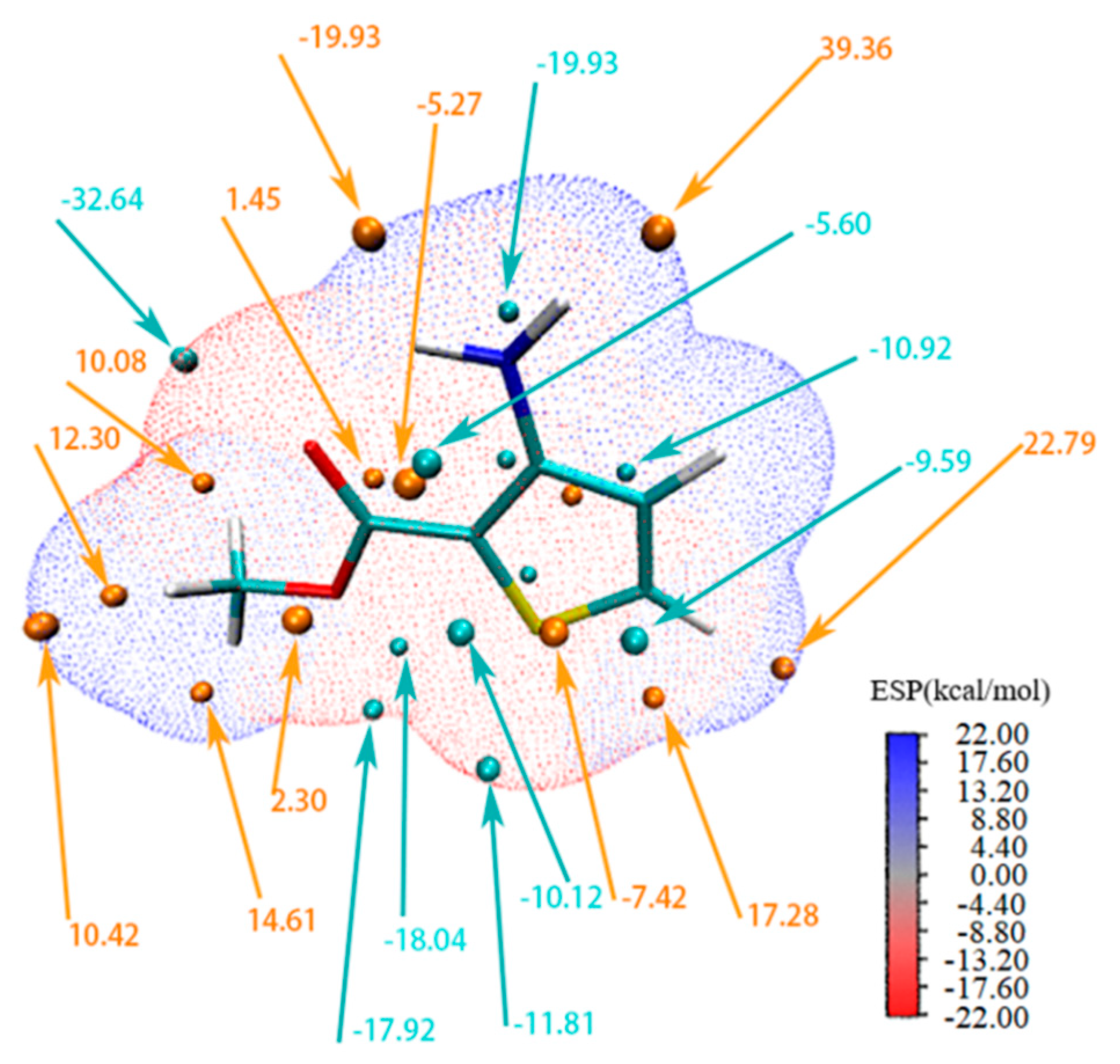 Table 2. Hydrogen bond and weak interactions of matc.
Table 2. Hydrogen bond and weak interactions of matc.
Symmetry codes: (i) −x, y − , −z + ; (ii) −x + 1, y − , −z + ; (iii) −1 + x, −1 + y, z; (iv) x, 1 + y, z.
© 2020 by the authors. Licensee MDPI, Basel, Switzerland. This article is an open access article distributed under the terms and conditions of the Creative Commons Attribution (CC BY) license (http://creativecommons.org/licenses/by/4.0/).
We use cookies on our website to ensure you get the best experience. Read more about our cookies here.
Accept
We have just recently launched a new version of our website. Help us to further improve by taking part in this short 5 minute survey here. here.
Never show this again