Effect of a Substituent in Cyclopentadienyl Ligand on Iridium-Catalyzed Acceptorless Dehydrogenation of Alcohols and 2-Methyl-1,2,3,4-tetrahydroquinoline
Previous Article in Journal

Alkyl aryl ethers are ubiquitous structural motifs present in both natural and synthetic compounds, particularly in bioactive molecules targeted as pharmaceuticals (Scheme 1) [1,2]. Compared to the traditional method for carbon-oxygen bond coupling [3,4,5,6], transition metal catalyzed C–H alkoxylation with alcohols has received much attention in recent decades in terms of atom and step economy [7,8,9,10]. However, direct C–H bond alkoxylation has been mostly limited to a palladium- [11,12,13,14,15] or copper-catalyzed system [16,17,18,19,20] which are both more biological toxicity metals.
Recently, the first-row transition metals such as iron, cobalt, and nickel for C–H alkoxylation, have attracted more attention owing to low biological toxicity as well as low cost [21,22,23,24,25]. In 2015, Niu and co-workers have first reported cobalt-catalyzed alkoxylation of C(sp2)–H bond in aromatic and olefinic carboxamides with Ag2O as oxidant (Scheme 2a) [21]. Lately, a new cobalt-catalyzed system has reported by same group for C8 alkoxylation of naphthylamine derivatives with both primary and secondary alcohols [22]. In 2018, an efficient Nickel-catalyzed C–H bond alkoxylation of benzamides and olefinic carboxamides with alcohols was also achieved for the first time by Sundararaju’s group (Scheme 2b) [23]. In the same year, our group also reported an iron-catalyzed ethoxylation of aryl C(sp2)–H bonds with cobalt co-catalyst (Scheme 2c) [24]. However, all of these reactions were carried out with silver reagents. While silver is also a common transition metal catalyst for C–H functionalization [26,27,28,29,30,31,32], silver-mediated alkoxylation of aryl C(sp2)–H bonds will be attractive but challenging.
As a part of our continuous interest towards using the newly developed directing group derived from the drug structure N,N′-dimethylethanediamine (DMEDA), we also realized the copper-catalyzed DMEDA-directed methoxylation recently [33]. Considering silver is the heavier congener of copper in the Periodic Table and it also has high catalytic activity for C–H functionalization, we speculated that the DMEDA directing group may facilitate the silver-mediated methoxylation of aryl C(sp2)–H bonds. We found that this is indeed the case, and we report herein a silver-mediated methoxylation of aryl C(sp2)–H bonds with methanol to prepare Alkyl aryl ethers for the first time (Scheme 2d).

Initially, the synthesis study was carried out with N-(2-(dimethylamino)ethyl)benzamide (1a) as a model substrate (Table 1). While this transformation is a cross-dehydrogenative coupling (CDC) reaction, high-valent metal is needed for the electrophilic activation of C(sp2)–H bonds [34,35,36,37]. Since high-valent silver is rare in relation to copper under normal conditions, [38] the combination of Ag(I) and K2S2O8 which proved to be efficient for a silver-catalyzed or silver-mediated system was used in this system [31,32]. However, no good result was observed after the preliminary screening. Fortunately, the reaction was found to proceed efficiently in the presence of triphenylphosphine as a ligand (Entry 1, 63%). It is obviously that the phosphine ligand was critical for this transformation, when the desired product 3a was almost unobserved except without the phosphine ligand (Entry 8). In this system, we also found that a large number of phosphine ligands were oxidized to phosphine oxides, while phosphine oxides did not promote this transformation (Entry 3). Subsequently, 1.5 equivalents were screened out as the necessary amount of phosphine ligand (for more details, see Supplementary Materials). The effects of various structures of phosphine ligands for this system was also investigated, and trivalent phosphine ligands were found to promote this transformation efficiently (Scheme 3, Entry 1–7). What’s more, by comparing the results of L2 and L4, it was obvious that the steric effect had a great influence on this reaction (Entry 2,4). On the basis of that, a series of silver salts such as AgNO3, Ag2CO3, AgOAc, AgOTf, Ag2O, Ag2SO4, AgOPiv, and AgF were screened, then AgOPiv was found to be the optimal condition for this reaction (for more details, see SI). Meanwhile, different cosolvents were evaluated, it could be found that polar solvents such as DMSO, DMF and DMA were favorable for promoting the reaction, and DMA was found to be the most suitable cosolvent (Entry 9–12). Various additives were then tested, and the results showed that methoxylated yield increased in the presence of Na2SO4 (Entry 13, 72%). While MgSO4 were used as an additive, the yield was improved to 78% (Entry 14, Isolated yield 71%). However, no obvious improvement could be observed when other additives were added to this system (Entry 15–19). This may due to the high binding energy of Ag(3d5/2) states for AgSO4, a Ag(II) compuond [39]. The effect of the amount of AgOPiv was also investigated, decreasing the amount of AgOPiv to 3.0 equivalent reduced the yield of 1a to 55% (Entry 20). Furthermore, the reaction was found to be sensitive to air and moisture, switching the atmosphere from argon to air led to no reaction at all (Entry 21). Finally, different temperatures were also evaluated, and 55 °C was found to be the optimum temperature (for more details, see SI).
Using the optimal reaction conditions, the reaction scope with respect to aromatic substrates is presented in Table 2. In general, the demonstrated transformation was found to be compatible with a variety of benzamide derivatives bearing either electron-withdrawing or electron-donating groups, providing the corresponding methoxylated products with moderate to good yields (2b–2s). For example, fluoro (2c,2o), chloro (2d,2n,2s), bromo (2b,2p), nitro (2e), and cyano (2h) groups are well tolerated, which are convenient handles for further functionality. Due to the reactive activity of the iodine functional group, the reaction of 1g only gave the methoxylated product in 14% yield accompanied by the compounds 1a (yield 23%) and 2a (yield 31%). The reaction protocol was sensitive to steric hindrance, methoxylation with ortho-substituted substrates gave no encouraging results. But gratifyingly, the methoxylation of meta-substituted substrates showed high regioselectivity, which proceeded exclusively at the less hindered C–H bonds irrespective of the electronic properties of the substrates (2l–2r). Disubstituted substrate such as 3,5-dichloro-N-(2-(dimethylamino)ethyl) benzamide were also tolerated well under the optimized conditions (2s). Finally, other alcohols such as ethanol, propanol, isopropanol, butanol, and 2-butyl alcohol were also screened; however, encouraging results were not obtained.

A plausible mechanism is proposed in Scheme 4 on the basis of the above observations and preliminary mechanistic studies. [38,39,40,41] It is known that in the presence of peroxydisulfate, the silver(I) salt is oxidized to a silver(II) species [40,41]. Complexation of benzamide 1a and phosphine ligand (L) to the silver(II) species (intermediate A), followed by C–H activation, affords the intermediate B. The intermediate B undergoes reductive elimination to give intermediate C, which was followed by protonation to generate the desired product 2a. While silver also existed as an oxidant in the stage of C–H activation, the stoichiometric silver reagent was indispensable.

We presented the first example of silver-mediated phosphine-promoted methoxylation of aryl C(sp2)–H bonds with the commercially available reagent for the preparation of alkyl aryl ethers. This protocol is characterized by mild reaction conditions, broad substrate scope, and high regioselectivity. In addition, without the use of more biological toxicity metals such as copper and palladium, this system will be more suitable for the synthesis of related active drug molecules. Further exploration of this strategy to the synthesis of related active drug molecules is currently in progress. 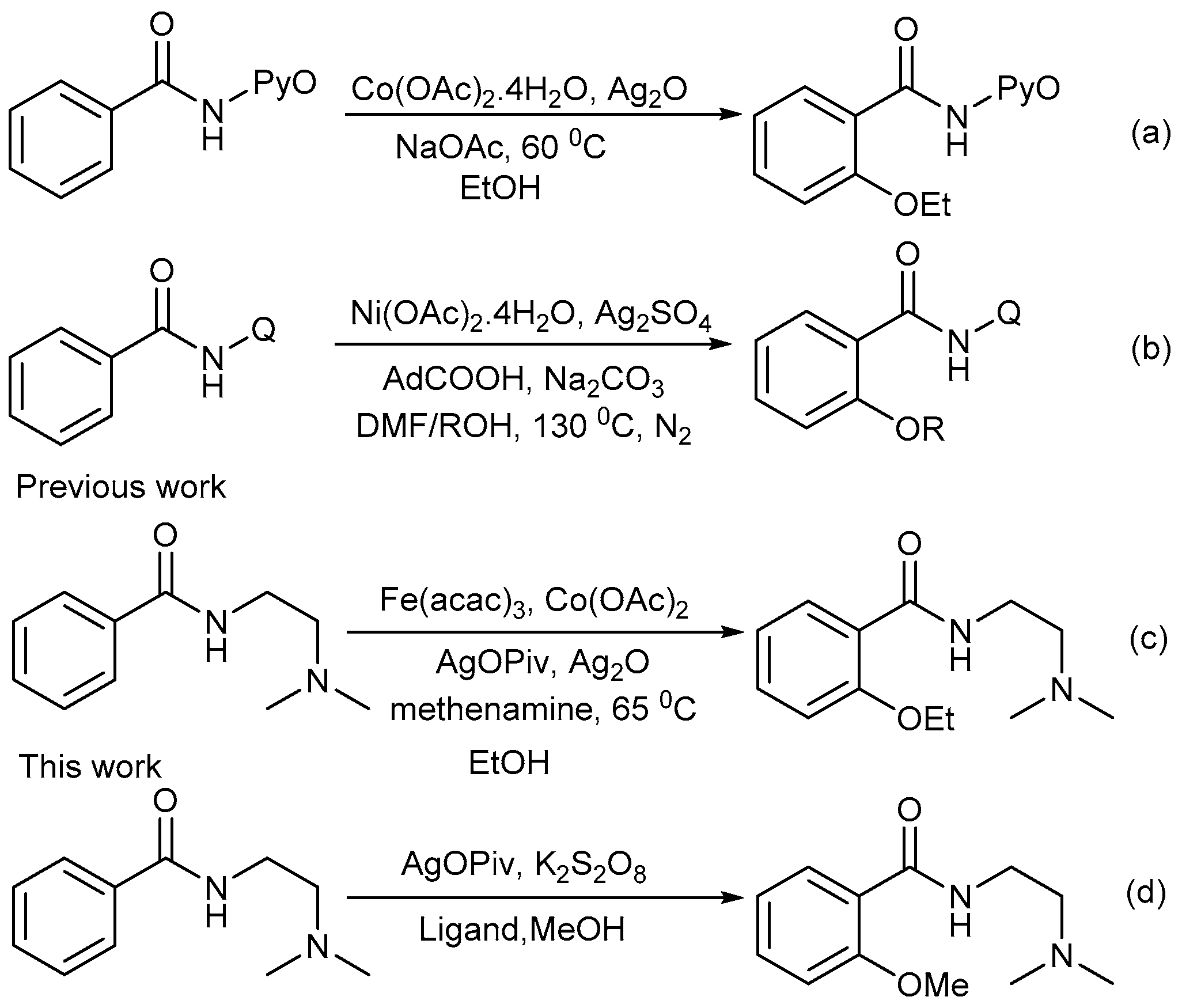 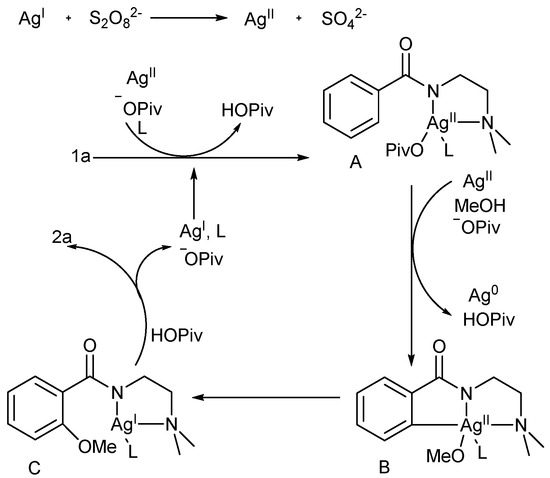 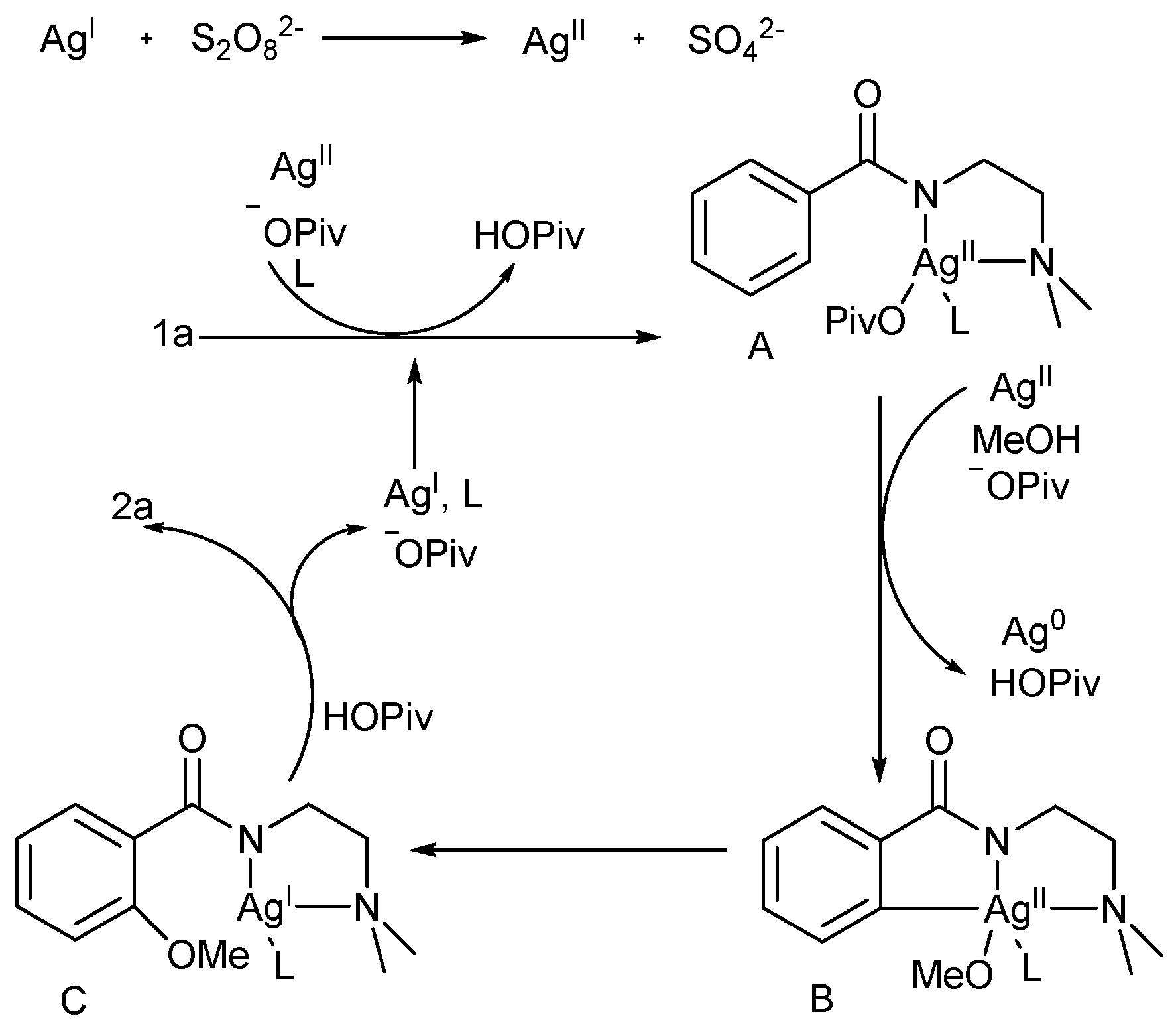 Table 2. Substrate scope of aromatic compounds a.
Table 2. Substrate scope of aromatic compounds a.
a Reaction condition: 1 (0.1 mmol), L1 (1.5 equiv.), AgOPiv (4.0 equiv.), K2S2O8 (4.0 equiv.), MgSO4 (2.0 equiv.), in MeOH /DMA (1/1) 1 mL at 55 °C under Ar atmosphere. b Isolated yield.
© 2019 by the authors. Licensee MDPI, Basel, Switzerland. This article is an open access article distributed under the terms and conditions of the Creative Commons Attribution (CC BY) license (http://creativecommons.org/licenses/by/4.0/).
We use cookies on our website to ensure you get the best experience. Read more about our cookies here.
Accept
We have just recently launched a new version of our website. Help us to further improve by taking part in this short 5 minute survey here. here.
Never show this again