Biotransformation with a New Acinetobacter sp. Isolate for Highly Enantioselective Synthesis of a Chiral Intermediate of Miconazole
Previous Article in Journal

Utilizing plant-based materials as a biofuel source is an increasingly popular attempt to redesign the global energy cycle. This endeavour underlines the potential of cellulase enzymes for green energy production and requires the structural and functional engineering of natural enzymes to enhance their utilization. In this work, we aimed to engineer enzymatic and functional properties of Endoglucanase I (EGI) by swapping the Ala43-Gly83 region of Cellobiohydrolase I (CBHI) from Trichoderma reesei. Herein, we report the enhanced enzymatic activity and improved thermal stability of the engineered enzyme, called EGI_swapped, compared to EGI. The difference in the enzymatic activity profile of EGI_swapped and the EGI enzymes became more pronounced upon increasing metal-ion concentrations in the reaction media. Notably, the engineered enzyme retained a considerable level of enzymatic activity after thermal incubation for 90 min at 70 °C while EGI completely lost its enzymatic activity. Circular Dichroism spectroscopy studies revealed distinctive conformational and thermal susceptibility differences between EGI_swapped and EGI enzymes, confirming the improved structural integrity of the swapped enzyme. This study highlights the importance of swapping the metal-ion coordination region in the engineering of EGI enzyme for enhanced structural and thermal stability. View Full-Text
Keywords: Endoglucanese I; Cellbiohydrolase I; Trichoderma reesei; Swapping; Protein Engineering; divalent metal ion Endoglucanese I; Cellbiohydrolase I; Trichoderma reesei; Swapping; Protein Engineering; divalent metal ion
►▼ Show Figures 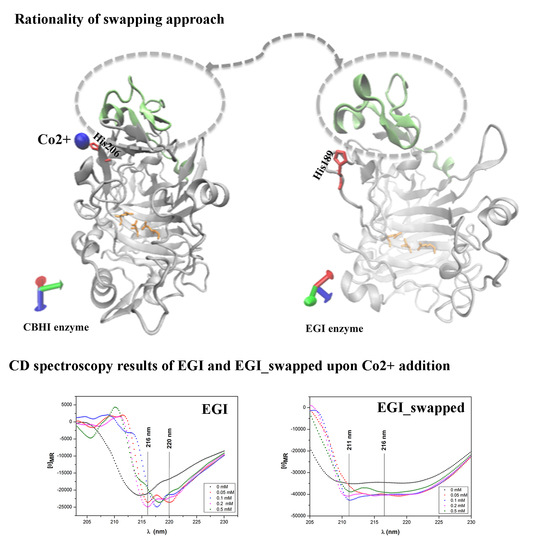 
Yenenler, Aslı; Kurt, Hasan; Sezerman, Osman U. 2019. "Enhancing Enzymatic Properties of Endoglucanase I Enzyme from Trichoderma Reesei via Swapping from Cellobiohydrolase I Enzyme" Catalysts 9, no. 2: 130. https://doi.org/10.3390/catal9020130