In this study, a low-cost and environmentally friendly method is developed to synthesize cobalt and nitrogen co-doped graphene-carbon nanotube aerogel (Co-N-GCA) as a bifunctional electrocatalyst for the oxygen reduction reaction (ORR) and the oxygen evolution reaction (OER). The as-prepared Co-N-GCA has a hierarchical meso- and macroporous structure with a high N doping level (8.92 at. %) and a large specific surface area (456 m2 g−1). In an alkaline medium, the catalyst exhibits superior ORR electrocatalytic activity with an onset potential 15 mV more positive than Pt/C, and its diffusion-limiting current density is 29% higher than that of commercial Pt/C. The obtained Co-N-GCA is also highly active toward the OER, with a small overpotential of 408 mV at a current density of 10 mA cm−2. Its overall oxygen electrode activity parameter (ΔE) is 0.821 V, which is comparable to most of the best nonprecious-metal catalysts reported previously. Furthermore, Co-N-GCA demonstrates superior durability in both the ORR and the OER, making it a promising noble-metal-free bifunctional catalyst in practical applications for energy conversion and storage.
Keywords: graphene-carbon nanotube aerogel; cobalt and nitrogen co-doped; oxygen reduction reaction; oxygen evolution reaction graphene-carbon nanotube aerogel; cobalt and nitrogen co-doped; oxygen reduction reaction; oxygen evolution reaction

Global energy and environmental issues have stimulated tremendous ongoing research into developing sustainable and environmentally friendly energy conversion and storage systems [1]. Creating highly active electrocatalysts for the oxygen reduction reaction (ORR) and the oxygen evolution reaction (OER) is crucial for the practical application of fuel cells, metal-air batteries, and electrolyzers. Currently, Pt-based catalysts are regarded as the most active ORR catalysts but are poor for the OER [2,3], while IrO2 and RuO2 are the most efficient catalysts for the OER but are poor for the ORR [4]. However, their commercialization has been greatly hindered by the scarcity of their materials, their consequent high cost, and their poor durability. As a result, extensive research efforts have been devoted to searching for low-cost alternatives with comparable catalytic activity to noble metal-based catalysts [5,6]. Due to the sluggish kinetics of the ORR and OER [7,8,9], it is highly challenging but imperative to develop a cheap and effective bifunctional electrocatalyst for the ORR and OER.
Extensive efforts have been made to develop non-noble-metal bifunctional electrocatalysts, such as transition metal oxides/sulfides [10,11,12,13,14,15], carbon-based materials [9,16,17,18,19], and perovskites [20]. Among these promising bifunctional ORR/OER catalysts, metal-nitrogen-doped carbon materials have attracted much attention due to their remarkable activity, tunable surface chemistry, fast electron transfer capacity, and economic viability [21,22,23]. However, substantially increasing the active sites of metal-nitrogen-doped carbon materials remains a great challenge. Recently, it was found that using nanosized carbon materials as supports, such as one-dimensional carbon nanotubes (CNTs) and two-dimensional graphene, can further improve electrocatalytic performance [24,25,26,27]. However, methods for the synthesis of metal-nitrogen-doped graphene/CNTs often requires the high temperature (600–1200 °C) which limits the practical application. And both CNTs and graphene nanosheets are inclined to aggregate with each other due to strong Van der Waals interactions, and this greatly hinders the full utilization of the active sites for catalytic reactions [21,28,29].
Because of their three-dimensional network structure, extremely low density, high porosity, and large specific surface area, carbon-based aerogels have emerged as promising nanomaterials and are providing fascinating options for preparing new functional electrode materials [30]. The incorporation of CNTs into graphene to produce a graphene–CNTs hybrid aerogel not only could favor the dispersion of graphene and CNTs while maintaining the original properties of both graphene and CNTs, but also could yield a 3D, interconnected, conductive network structure. This aerogel network structure, for ORR, favors the O2 transformation to the active sites; for OER, facilitates timely transfer evolved O2 molecules. It is expected that a graphene-carbon nanotube aerogel could result in better electrocatalytic performance. However, to the best of our knowledge, there is no report about M-N-C graphene-CNTs aerogel as an efficient oxygen electrode catalyst.
Herein, we report a one-pot hydrothermal method to prepare a cobalt and nitrogen co-doped graphene-CNTs aerogel (Co-N-GCA) as a bifunctional electrocatalyst for the ORR and OER. Benefiting from abundant catalytic active sites and a unique hierarchical structure that increases the exposure of active sites and favors electron transfer and the diffusion of O2 molecules, the obtained electrocatalyst exhibits superior electrocatalytic activity towards both the ORR and the OER in an alkaline medium.

3.2. Preparation of the Catalysts

GO (40 mg) was dispersed in 40 mL deionized water. Acid-treated carbon nanotubes (4 mg), urea (6 g), and cobalt(II) acetate tetrahydrate (30 mg) were added to the GO solution. The obtained mixture was ultrasonically treated for 2 h to form a suspension. Subsequently, the stable suspension was transferred into a 50 mL Teflon-lined autoclave and heated at 170 °C for 10 h. After the autoclave cooled to room temperature, the resulting hydrogel was washed with deionized water several times, followed by freeze drying. The resulting material is denoted as Co-N-GCA. For comparison, Co-GCA, N-GCA, and GCA were also prepared via similar procedures without the addition of urea, cobalt(II) acetate tetrahydrate, or both, respectively.

Electrochemical measurements were performed on an electrochemical workstation (Ivium, Eindhoven, The Netherlands) in a three-electrode configuration. An Ag/AgCl electrode (3 M NaCl) and a Pt wire were used as the reference electrode and the counter electrode, respectively. 0.1 M KOH solution was selected as the electrolyte. The catalyst ink was prepared by dispersing 5 mg of the corresponding catalyst in 1 mL Nafion ethanol solution (0.25 wt. %), then dropping 20 µL of the ink on a polished glassy carbon electrode with a diameter of 5 mm, followed by drying under an infrared lamp.
Before the measurements, the electrolyte solution was purged with high-purity N2 or O2 gas for at least 30 min. Cyclic voltammetry (CV) and linear sweep voltammetry (LSV) tests were performed with a sweep rate of 10 mV s−1. The Ag/AgCl (3 M NaCl) electrode was calibrated with respect to reversible hydrogen electrode (RHE), in 0.1 M KOH, E (RHE) = E (Ag/AgCl) + 0.982 V.
For the ORR, the electron transfer number (n) per oxygen molecule was calculated with the Koutecky–Levich (K–L) equation as follows [11]: where j and jk are the measured current density and the kinetic current density, respectively; n is the transferred electron number per oxygen molecule; F is the Faraday constant (96,485 C mol−1); C is the bulk concentration of O2 in 0.1 M KOH (1.2 × 10−3 mol L−1); D is the O2 diffusion coefficient of in 0.1 M KOH (1.9 × 10−5 cm2 s−1); γ is the kinetic viscosity of the electrolyte (0.01 cm2 s−1); and ω is the angular velocity.
The Tafel plots were obtained by correcting the measured current density against the diffusion-limiting density to give the kinetic current density, calculated from:
For the OER, the OER potential was IR corrected to compensate for the electrolyte’s ohmic resistance by using the E–iR relation, where i is the current and R is the uncompensated for ohmic electrolyte resistance (~45 Ω) measured via high-frequency AC impedance.

In summary, a highly efficient bifunctional cobalt and nitrogen co-doped graphene-carbon nanotube aerogel (Co-N-GCA) has been designed and prepared using a simple one-pot hydrothermal method. By combining the merits of: (1) a synergistic effect between the abundant highly active sites, including cobalt oxide species, nitrogen dopant, and possibly Co–Nx species and (2) a 3D conductive, interconnected, hierarchical porous structure for the exposure of active sites and efficient electron and mass transport, the Co-N-GCA exhibited excellent bifunctional catalytic performance and long-term durability in the ORR and OER. These results reveal its promising potential as a low-cost and highly active ORR and OER catalyst for applications in regenerative fuel cells and rechargeable metal–air batteries. 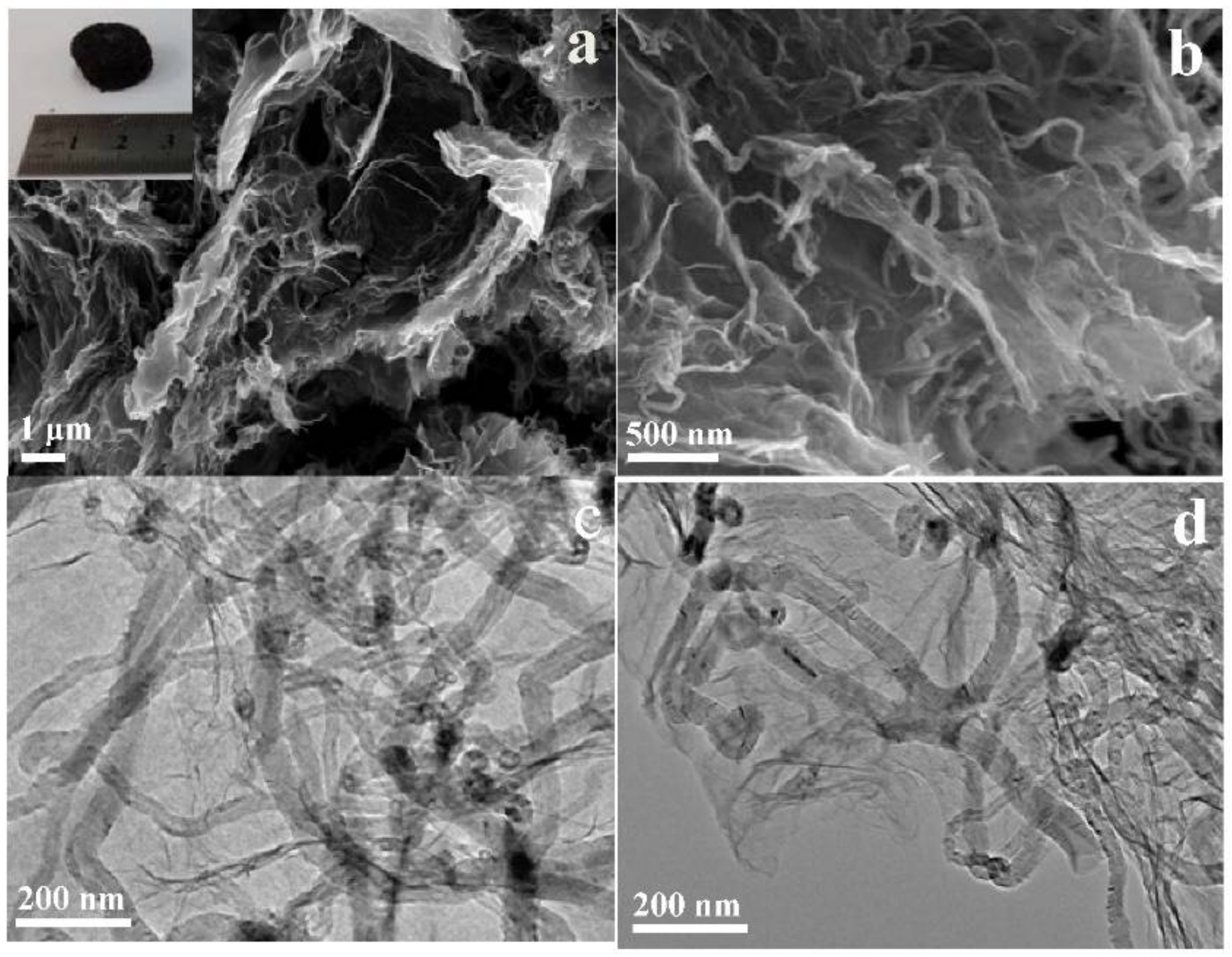