In this work, the influence of the structure-forming agent on the composition, morphology and oxygen reduction reaction (ORR) activity of Fe-N-C catalysts was investigated. As structure-forming agents (SFAs), dicyandiamide (DCDA) (nitrogen source) or oxalic acid (oxygen source) or mixtures thereof were used. For characterization, cyclic voltammetry and rotating disc electrode (RDE) experiments were performed in 0.1 M H2SO4. In addition to this, N2 sorption measurements and Raman spectroscopy were performed for the structural, and elemental analysis for chemical characterization. The role of metal, nitrogen and carbon sources within the synthesis of Fe-N-C catalysts has been pointed out before. Here, we show that the optimum in terms of ORR activity is achieved if both N- and O-containing SFAs are used in almost similar fractions. All catalysts display a redox couple, where its position depends on the fractions of SFAs. The SFA has also a strong impact on the morphology: Catalysts that were prepared with a larger fraction of N-containing SFA revealed a higher order in graphitization, indicated by bands in the 2nd order range of the Raman spectra. Nevertheless, the optimum in terms of ORR activity is obtained for the catalyst with highest D/G band ratio. Therefore, the results indicate that the presence of an additional oxygen-containing SFA is beneficial within the preparation.
Keywords: Fe-N-C catalyst; oxygen reduction reaction Fe-N-C catalyst; oxygen reduction reaction

Me-N-C catalysts play an emerging role as possible catalyst materials for the oxygen reduction reaction in fuel cells. It is clear that they can be prepared from any kind of metal, nitrogen and carbon precursor, but that the overall achievable activity will be strongly related to the optimization of the mixtures. In the first approaches, macrocycles were supported on a carbon black and then pyrolysed at temperatures above 600 °C to form significantly more active catalysts in comparison to the non-pyrolysed macrocycles [1,2]. To enable cheaper preparation and independent optimization of metal and nitrogen content in the synthesis, alternative preparation approaches had to be established. In 1989, Gupta et al. showed that the combination of metal acetate with polyacrylonitrile and carbon black leads to the formation of active materials when pyrolysed at temperatures >600 °C [3]. Main efforts to find suitable nitrogen and metal precursors were made by Dodelet’s group and others [4,5,6,7]. These early approaches were strongly limited in the density of active sites, as the carbon black always displays a relative mass in the final catalyst that is not contributing in terms of active sites [8,9,10,11].
To overcome this limitation, the first method that enabled the preparation of Me-N-C catalysts without additional carbon support, is the oxalate-supported pyrolysis of porphyrins [12]. In this approach oxalate works as a structure-forming agent (SFA) as the final catalyst resembles its morphology [13,14,15]. In addition to this, the use of sulfur strongly affected the morphology and performance of the catalysts [16,17]. Sulfur usually enables a higher porosity and lower graphitization [16,18], but more important it was found to prevent carbide formation that was assigned to active site destruction by works of us and of others [17,19,20]. That indeed excess iron was at the origin of active site destruction was further confirmed through an alternative strategy to prevent active site destruction [21]. Namely, instead of following the state-of-the art preparation protocol (pyrolysis plus acid leaching), the pyrolysis was interrupted at 550 °C (a temperature below the temperature limit for iron carbide formation), excess iron was removed by an acid leaching. Afterwards the synthesis was continued up to the usual end temperature followed by an additional acid-leaching. Indeed, such catalysts prepared with intermediate acid leaching (IAL) reach the same activities as the original sulfur-added catalysts.
Motivated by these findings, we started to develop a new synthesis route in our group that uses dicyandiamide (DCDA) as a structure-forming agent in combination with a nitrogen and iron precursor. In recent studies we varied the amount of sulfur within this synthesis [22]. The trends in kinetic current density as a function of S/Me ratio were similar to trends observed previously for the combination of iron oxalate with CoTMPP [23], with a maximum in ORR activity at S/Fe = 0.8. However, in contrast to these earlier finding, our new catalysts still contained considerable fractions of iron carbide in the optimum of ORR activity. Only for the highest S/Me ratios iron carbide formation was inhibited but iron sulfide species were formed [22]. This showed us, that while sulfur-addition strongly affects the achievable ORR activity, sulfur itself helps not to prevent iron carbide formation in our selected system.
In order to get more insights on the missing parameter that is required for further optimization, we focused on a molar ratio of S/Fe = 0.8 in this work and stepwise exchanged the DCDA with oxalic acid as alternative a structure-forming agent with strong similarities to the metal oxalates used within the oxalate-supported pyrolysis of porphyrins [14]. The results show that by tuning the composition of the SFAs the activity and morphology is changing considerably.

In order to prepare a precursor, first sulfur (0.78 mol eq) is grounded in a mortar together with iron chloride hexahydrate (1 mol eq). Then, 1,10-phenanthroline (0.48 mol eq) is added and mixed until a homogeneous mixture is obtained. Finally, the structure-forming agents (SFAs) (6.5 mol eq) are added and the mixture is grounded until homogeneous. The preparation is given as Scheme in Figure 8, below.
As mentioned in the scheme, the color of the precursor changed upon addition of DCDA and/or oxalic acid. At the same time the initially solid precursor mixture turned into a viscose paste. While DCDA addition gave a distinct red color to this pulp (might be indicative of [Fe(CN)6]3+ formation), the addition of oxalic acid turned the color more orange/light brown. In addition, gas evolution took then place. If the precursor was then left in air, finally the precursor appeared like a meringue as visible in the picture. Regarding the precursor to obtain the 80% catalyst of this variation series, it contains the minimum amount of DCDA that had to be present to enable this gas evolution. Gas evolution and formation of this meringue-like morphology was not observed at higher oxalic acid contents. Except for this; however, the precursor of the 80% sample behaved rather similar during preparation compared to the other samples.
The as-obtained precursor mixture is filled in quartz boats and then subjected to a heat-treatment. For the pyrolysis a heating ramp of 5 °C min−1 is chosen. To allow the system to balance in-between there are two dwell times at 300 and 500 °C, each for 30 min, before heated to the final end temperature of 800 °C with a dwell time of 60 min.
After cooling down (<80 °C) the quartz boat with the main part of the pyrolysis product is transferred to 2 M HCl. The composition is first acid-leached for 1 h in an ultrasonic bath and then further stirred for additional 8 h (usually over-night). After filtration, washing with H2O and drying the final mass is obtained.
Note, for determining the yields the final catalyst mass (yield after pyrolysis and acid leaching) or the mass after pyrolysis was divided by the related precursor masses of iron chloride hexahydrate, 1,10-phenanthroline and sulfur, without considering the masses of DCDA and/or oxalic acid. This was applied, as otherwise, due to the different molar masses of DCDA and oxalic acid also the absolute mass of the precursor mixture would have changed.

Electrochemistry is performed in 0.1 M H2SO4 with a conventional 3-electrode setup. The working electrode is a glassy carbon disc (0.196 cm2) coated with the catalyst ink. As counter and reference electrode; respectively, a glassy carbon rod and an Ag/AgCl were used. All given potentials refer to the reversible hydrogen electrode (RHE). In order to prepare the catalyst ink, 5 mg of catalyst powder were dispersed in a mixture of 25 µL Nafion (5 wt %), 83.3 µL H2O and 142 µL ethanol, hence the Nafion to catalyst ratio is 0.25. After 30 min of sonication the ink is homogenized with an ultrasound homogenizer. Then 5 µL of the ink are dropped on the GC disc and left to dry (catalyst loading: 0.5 mg cm−2).
First measurements are performed in N2 saturated electrolyte with a conditioning of the electrode (20 scans with 300 mV s−1, 0.0 to 1.2 V). Then a CV is measured with 100 mV s−1, this CV is used for evaluating the capacitive current density of our catalysts. In addition, one Linear Scan Voltammogram (LSV) is measured from 1.2 to 0.0 V for later background correction of the RDE data with 10 mV s−1.
After saturating the electrolyte for 15–20 min with oxygen, three LSVs are recorded in the same potential range with 0, 900 and 1500 rpm as rotation speed. After background correction, the kinetic current density jkin is determined by Equation (1).
jkin(U) = [jDiff,lim × j(U)] × [jDiff,lim − j(U)]−1
In this equation, jDiff,lim is the as-measured diffusion limiting current density. For those catalysts that do not display a pronounced diffusion plateau the current density at 0.0 V was chosen as jDiff,lim. The parameter j(U) is the as-measured current density.

Raman spectroscopy was performed with an “alpha300 R” confocal Raman microscope (WITEC, Ulm, Germany) with a laser wavelength of 532.2 nm. Spectra were recorded in a range of 0 to 4000 cm−1 as overlay of ten scans each with 10 s of integration time. For the measurements, catalyst ink was dropped on a silicon disc and dried. For each sample measurements are performed at two to three different locations and the average graphs are plotted in this work.
For the fitting of the 1st order range typically found for carbon blacks (800–2000 cm−1) four bands were introduced with Voigt line shape.

Combustion analysis was performed for the overall sample series with a VarioEL III instrument (Elementar Analysesysteme GmbH, Langenselbold, Germany). Each sample was measured two times, average values as well as the standard deviation were determined and are included in the plots. In all cases the sum of the three components did not count up to 100%, what shows that additional species are present within the catalysts. This might be iron, sulfur and oxygen and maybe chlorine from the acid leaching step. 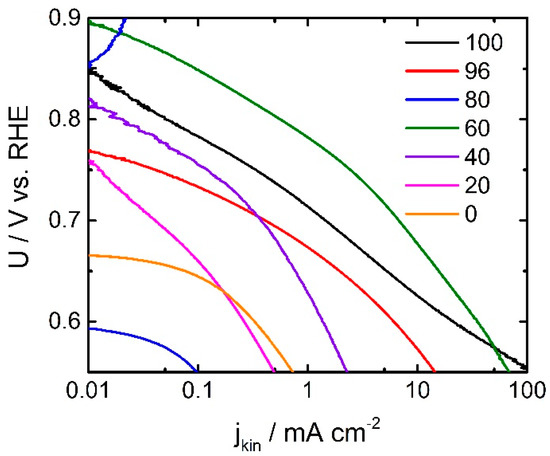 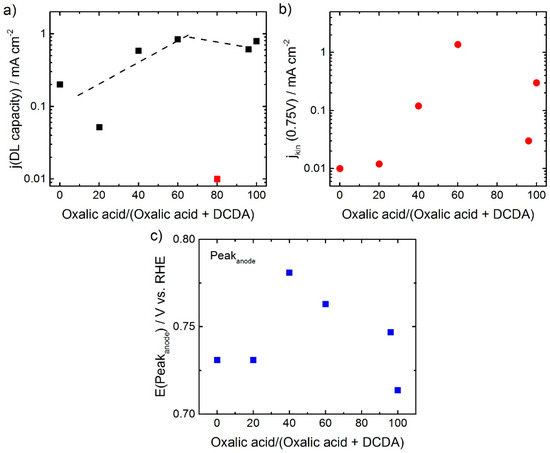