Carbon capture and utilization as a raw material for methanol production are options for addressing energy problems and global warming. However, the commercial methanol synthesis catalyst offers a poor efficiency in CO2 feedstock because of a low conversion of CO2 and its deactivation resulting from high water production during the process. To overcome these barriers, an efficient process consisting of three stage heat exchanger reactors was proposed for CO2 hydrogenation. The catalyst volume in the conventional methanol reactor (CR) is divided into three sections to load reactors. The product stream of each reactor is conveyed to a flash drum to remove methanol and water from the unreacted gases (H2, CO and CO2). Then, the gaseous stream enters the top of the next reactor as the inlet feed. This novel configuration increases CO2 conversion almost twice compared to one stage reactor. Also to reduce water production, a water permselective membrane was assisted in each reactor to remove water from the reaction side. The proposed process was compared with one stage reactor and CR from coal and natural gas. Methanol is produced 288, 305, 586 and 569 ton/day in CR, one-stage, three-stage and three-stage membrane reactors (MR), respectively. Although methanol production rate in three-stage MR is a bit lower than three stage reactors, the produced water, as the cause of catalyst poisoning, is notably reduced in this configuration. Results show that the proposed process is a strongly feasible way to produce methanol that can competitive with a traditional synthesis process. View Full-Text
Keywords: CO2 utilization; CO2 hydrogenation; green methanol; membrane reactors; H-SOD membrane CO2 utilization; CO2 hydrogenation; green methanol; membrane reactors; H-SOD membrane
►▼ Show Figures 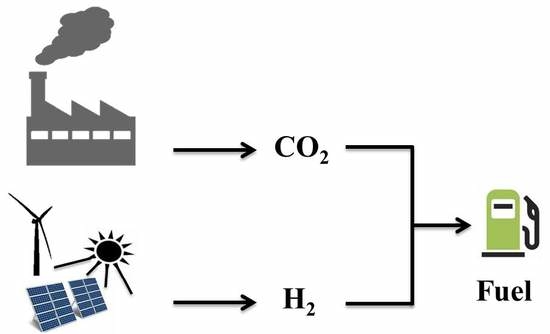