Fischer-Tropsch Synthesis on Multicomponent Catalysts: What Can We Learn from Computer Simulations?

In recent years, one of the most important aspects of environmental research has been the water pollution from emerging contaminants (ECs) such as endocrine disrupting chemicals (EDCs), pharmaceuticals and personal care products (PPCPs). Even they can be usually found in wastewater only at trace levels; their presence in aquatic environments raises the issue of their potential effects on human health and the environment [1,2,3]. Some adverse potential effects caused by ECs are aquatic toxicity, resistance development in pathogenic bacteria, genotoxicity and endocrine disruption [4,5,6].
Wastewater treatment plants are designed to remove conventional pollutants, such as suspended solids and biodegradable organic compounds, but they are not designed to remove low concentrations of synthetic pollutants, such as pharmaceuticals. These synthetic pollutants are resistant to conventional wastewater treatments. Advanced oxidation processes are treatments that are considered to be effective at removing EDCs from wastewater effluents. Advanced Oxidation Technology (AOT) has been examined to solve this environmental problem [7,8].
AOT has provided innovative, highly cost-effective and catalyzed chemical oxidation processes for treatment of contaminated soil, sludge and wastewater. AOT can be broadly defined as aqueous phase oxidation methods based primarily on the intermediacy of hydroxyl radicals, HO•, in the mechanism leading to the destruction of the pollutant compounds [9,10,11]. The hydroxyl radical can be generated photochemically and it has high effectiveness for the oxidation of organic matter [12,13].
Heterogeneous photocatalytic process is one of the most important AOTs and it is based on the oxidation of polluting compounds which can be found in air or water by means of a reaction occurring on a semiconductor catalytic surface activated by light with a specific wavelength.
TiO2 is the most investigated semiconductor catalyst particularly because it has great potential in solving environmental pollution [14] and it is chemically stable, non-toxic and inexpensive [15,16,17]. However, TiO2 has an important disadvantage because it is in powder form and, therefore, a post-treatment separation stage is needed for its use as photocatalytic material in wastewater decontamination by photocatalytic treatment [18,19]. This is the main reason why it is very useful to test the possibility of supporting the TiO2 active phase on several materials—e.g., activated carbon, silica, glass and polymers—in order for it to be used as photocatalysts in photocatalytic reactors for wastewater decontamination [20,21,22].
In this study, commercial TiO2 (Degussa P25) supported on glass spheres was evaluated as photocatalyst in a packed bed photo reactor used to remove emergent contaminants in wastewater. Paracetamol has been used as emergent contaminant model molecule, which is a common analgesic and antipyretic drug, and it is heavily used all over the world and can be found in effluent of wastewater treatment plants [23].

TiO2 active phase was analyzed by XRD and its crystalline phases were obtained. Table 1 shows the percentage of anatase and rutile phase, observing that TiO2 Degussa P25 is composed mainly by the photocatalitically active anatase phase [24,25]. In addition, Table 1 presents the textural parameters of TiO2 Degussa P25, which were examined by N2 adsorption–desorption porosimetry and mercury porosimetry. The textural parameters included in this table are: BET specific area (ABET), total pore area (A), porosity (ε) and density (ρ).
Table 1. TiO2 Degussa P25 characterization.
Prior to the study of the photocatalytic process, experiments in the stirred photoreactor have been performed in order to quantify the photolytic effect of the UV light on the paracetamol degradation in wastewater (pH = 8) and the adsorption of the emergent contaminant molecules onto the TiO2 surface. Figure 1 shows the degree of paracetamol removal from wastewater by means of both phenomenon in the photoreactor: Photolysis or adsorption. It can be concluded that the photolytic process has relatively low effect in the paracetamol removal from wastewater under UV light irradiation.

The paracetamol photodegradation with TGS acting as photocatalyst in the packed-bed photoreactor was evaluated studying first the influence of the wastewater flowrate along the packed-bed photoreactor on the degree of contaminant removal (Figure 4). The photolytic effect of the irradiation light used and the photocatalytic material adsorption capacity related to the global paracetamol removal was evaluated in this reactor configuration using the optimal flowrate in order to determinate the degree of contribution of both phenomenon in the global decontamination process. 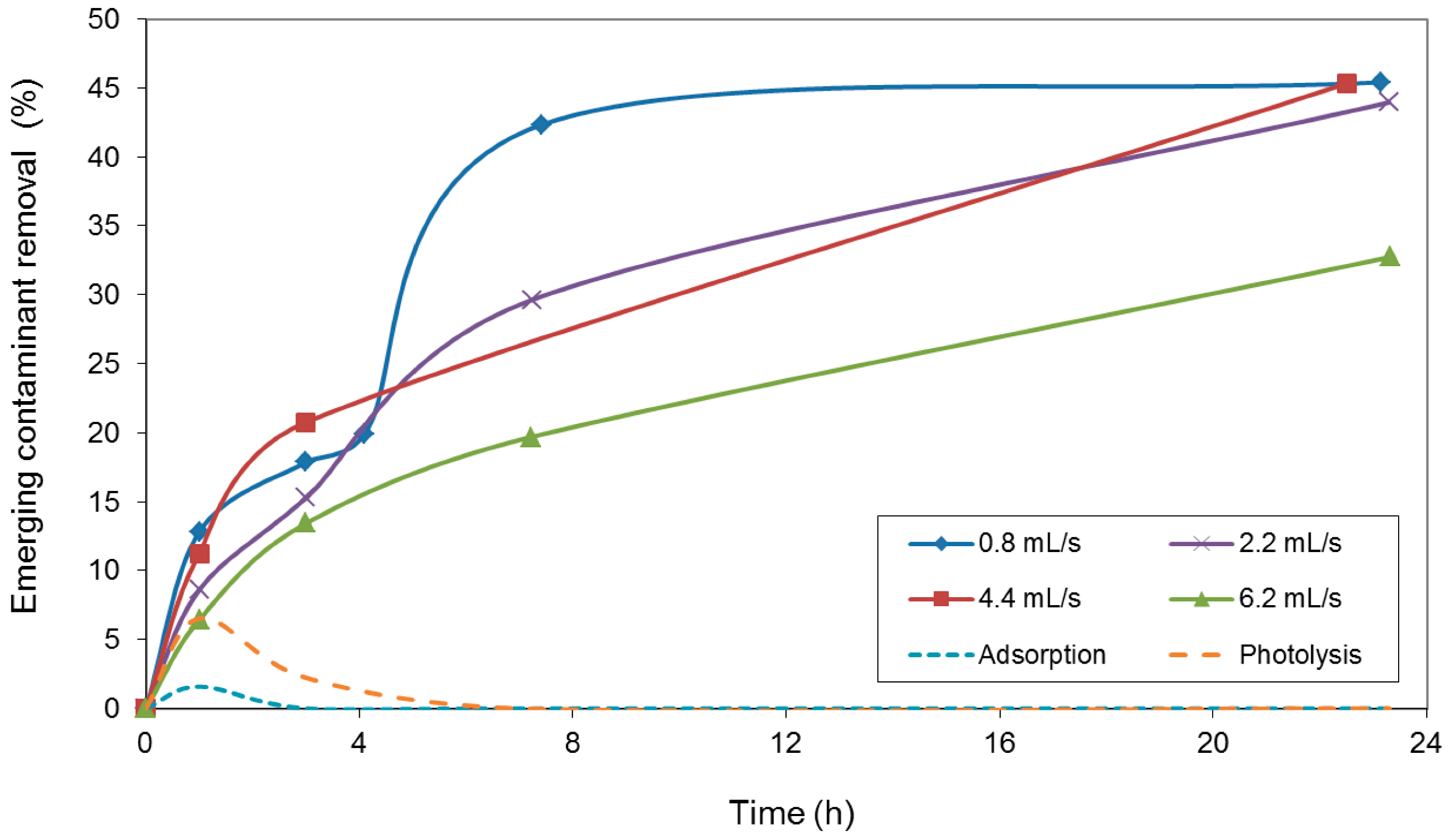 In this paper, the activity of TiO2 supported over glass spheres (TGS) as photocatalyst was studied evaluating the paracetamol (Acofarma, Llobregat, Spain) (as emergent contaminant model molecule) removal from wastewater. This heterogeneously photocatalyzed decontamination process, using photocatalyst particles in a packed-bed photoreactor configuration (crafted in our laboratory team), was compared with those results obtained from experiments using a TiO2 active phase (Degussa P25, Frankfurt, Germany) suspension in wastewater in a conventional stirred photoreactor.
The photocatalytically active material, TiO2 Degussa (Frankfurt, Germany) P25, was examined by X-ray diffraction (XRD) in order to obtain the percentage of anatase and rutile phase. Nitrogen adsorption-desorption porosimetry and mercury porosimetry techniques were used to study its specific surface area and textural properties.
Glass spheres, in the range 2–3 mm diameter, were used as support material in order to configure a packed-bed reactor with TiO2 catalytically active phase. Before coating, the glass spheres were etched for 24 h in diluted hydrofluoric acid, washed thoroughly with deionized water and dried at 105 °C for 2 h. Titanium (IV) isopropoxide (Aldrich, Steinheim, Germany) and ethanol were mixed with HCl. A hydroxide sol was obtained by hydrolysis of titanium (IV) isopropoxide. The surface modified glass spheres were immersed for 10 min in the hydroxide sol. Finally, glass spheres were dipped into suspension for 10 min and, after coating, they were dried at 105 °C and then calcinated at 450 °C for 2 h [34,35]. The procedure was repeated until the spheres were coated with five layers obtaining TiO2 supported over glass spheres (TGS) studied as photocatalyst.
The surface morphology and texture of the glass spheres and TGS were monitored by means of scanning electron microscope (SEM).
The paracetamol photodegradation process with TGS as photocatalyst was conducted in a packed bed photoreactor system (Figure 5). TGS were placed in the photocatalytic reactor (18 cm length, 0.6 cm internal diameter) and a solar radiation sodium vapour lamp (Philips, Amsterdam, Netherland, model 400-W G/92/2), placed at a distance of 50 cm from the packed-bed reactor, was used as light source (total radiation flux measured on the packed-bed surface was 160 mW/cm2). Paracetamol solution in water (50 mg/L) was introduced in the wastewater tank (250 mL), photoreactor temperature was kept constant at 20 °C and the paracetamol solution was recirculated along the system using a peristaltic pump; several samples were taken during 23 h of irradiation time and they were analysed by UV-Vis spectrophotometry determining the absorbance of paracetamol at λ = 244 nm, in order to study the degradation of paracetamol as contaminant in wastewater. The optimal wastewater recirculation flowrate was studied. Moreover, paracetamol photolysis (with light source and without photocatalyst) and paracetamol adsorption onto TGS (with photocatalyst and without light source) experiments were developed in order to evaluate its contribution to the emergent contaminant degradation or global wastewater decontamination process.
The study of the photocatalytic degradation of paracetamol with TiO2 active phase as photocatalyst suspension in wastewater was carried out in a stirred photoreactor (800 mL) using a UV radiation mercury lamp (Heraeus, Hanau, Germany, model TQ-150, 150 W) as light source. UV system is placed positioned coaxial inside reaction vessel (total radiation flux measured on the stirred photoreactor was 120 mW/cm2). In this photoreactor the temperature was kept constant at 20 °C, the paracetamol solution (50 mg/L) and the photocatalytic active phase in powder form (TiO2 Degussa P25) were introduced into the photoreactor and several samples were taken during 4 h of irradiation time and then analysed by UV-Vis spectrophotometry in order to follow the evolution of paracetamol concentration into the reactor. The optimal amount of photocatalyst and the pH influence were evaluated in this experimental system, pH was adjusted by using NaOH (0.1 M) or HCl (0.1 M). Additionally, paracetamol photolysis and adsorption phenomenon in this reactor configuration were evaluated. 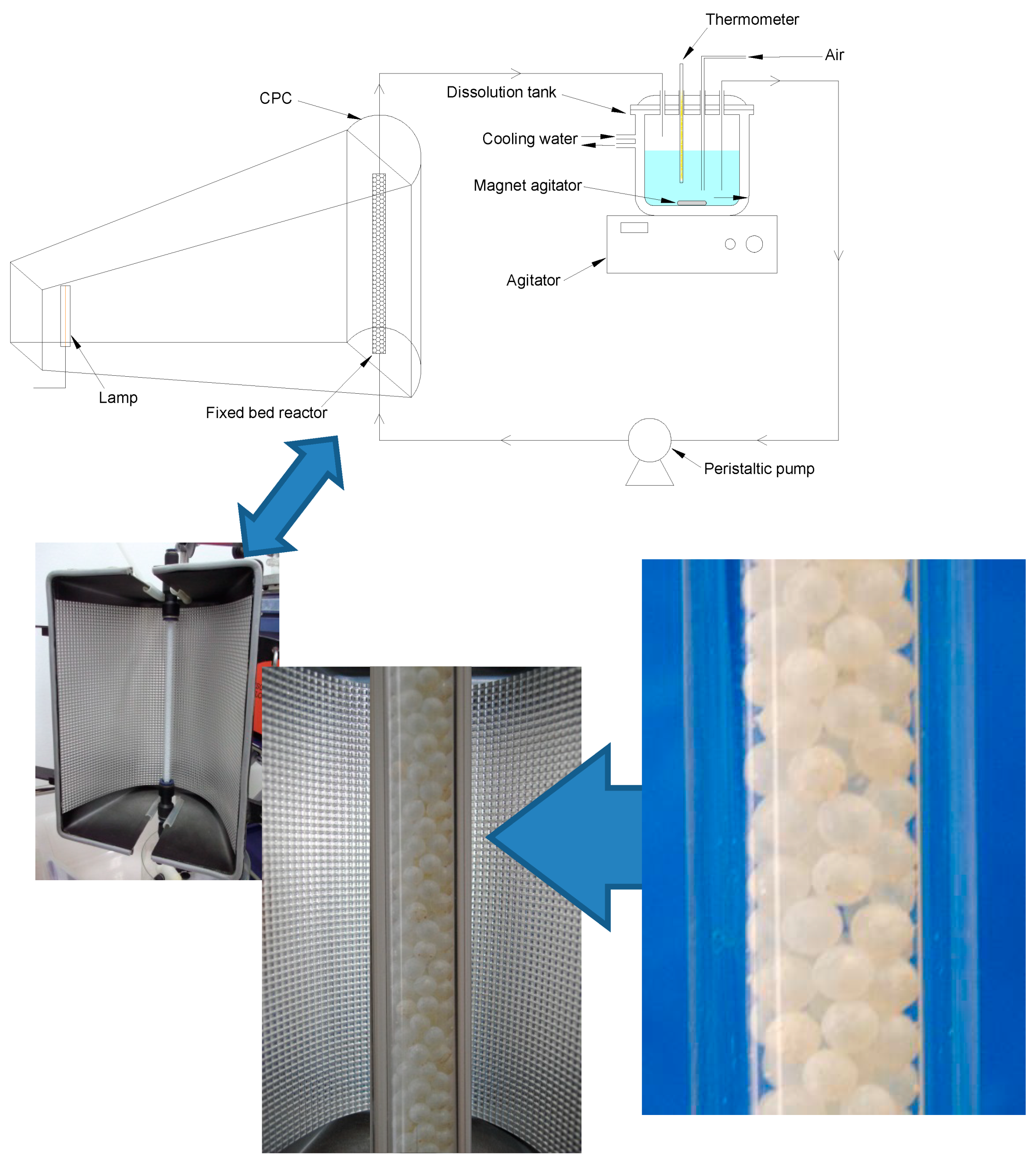 This research was partially supported by the project FOTOCAT of ‘‘Fundación Cajacanarias’’ and by Spanish Ministry of Economy and Competitiveness (Project ENE2013-47826-C4-1R). Authors thanks the kind collaboration of Jorge Méndez-Ramos (Physics Department, University of La Laguna).

All authors were involved in the conception and design of the experiments, as well as the collection, analysis and interpretation of data and writing or editing of this manuscript. All authors approved the final version of the manuscript.