Enantiocomplementary Preparation of (S)- and (R)-Arylalkylcarbinols by Lipase-Catalysed Resolution and Mitsunobu Inversion: Impact of Lipase Amount
Next Article in Special Issue

Inhibition of a Gold-Based Catalyst in Benzyl Alcohol Oxidation: Understanding and Remediation

The deactivation pattern of a “model” Ni/MgO catalyst in the pre-reforming of n-hexane with steam (T, 450 °C; P, 5–15 bar) is reviewed. The influence of the steam-to-carbon ratio (S/C, 1.5–3.5) on the rate of catalyst fouling by coking is ascertained. Catalyst fouling leads to an exponential decay in activity, denoting 1st-order dependence of the coking process on active sites availability. Hydrogen hinders the coking process, though slight activity decay is due to sintering of the active Ni phase. Deactivation by thiophene causes a sharp, almost linear, drop to nearly zero activity within only 6 h; this deactivation is likely due to dissociative adsorption of thiophene with subsequent strong, irreversible chemical adsorption of S-atoms on active Ni sites, i.e., irreversible poisoning. Modeling of activity decay curves (α, at/a0) by proper kinetic equations allows assessing the effects of temperature, pressure, S/C, H2 and thiophene feed on the deactivation pattern of the model Ni/MgO catalyst by coking, sintering, and poisoning phenomena. View Full-Text
Keywords: pre-reforming; activity decay; poisoning; sintering pre-reforming; activity decay; poisoning; sintering
►▼ Show Figures 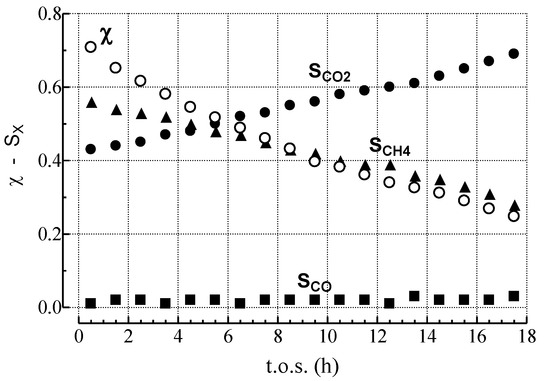