Electronic and Structural Properties of the Double Cubane Iron-Sulfur Cluster

The Amino Acids Motif -32GSSYN36- in the Catalytic Domain of E. coli Flavorubredoxin NO Reductase Is Essential for Its Activity

Flavodiiron proteins (FDPs) are a family of modular and soluble enzymes endowed with nitric oxide and/or oxygen reductase activities, producing N2O or H2O, respectively. The FDP from Escherichia coli, which, apart from the two core domains, possesses a rubredoxin-like domain at the C-terminus (therefore named flavorubredoxin (FlRd)), is a bona fide NO reductase, exhibiting O2 reducing activity that is approximately ten times lower than that for NO. Among the flavorubredoxins, there is a strictly conserved amino acids motif, -G[S,T]SYN-, close to the catalytic diiron center. To assess its role in FlRd’s activity, we designed several site-directed mutants, replacing the conserved residues with hydrophobic or anionic ones. The mutants, which maintained the general characteristics of the wild type enzyme, including cofactor content and integrity of the diiron center, revealed a decrease of their oxygen reductase activity, while the NO reductase activity—specifically, its physiological function—was almost completely abolished in some of the mutants. Molecular modeling of the mutant proteins pointed to subtle changes in the predicted structures that resulted in the reduction of the hydration of the regions around the conserved residues, as well as in the elimination of hydrogen bonds, which may affect proton transfer and/or product release. View Full-Text
Keywords: flavodiiron proteins; flavorubredoxin; nitric oxide reductase; oxygen reductase; nitrosative stress; diiron flavodiiron proteins; flavorubredoxin; nitric oxide reductase; oxygen reductase; nitrosative stress; diiron
►▼ Show Figures 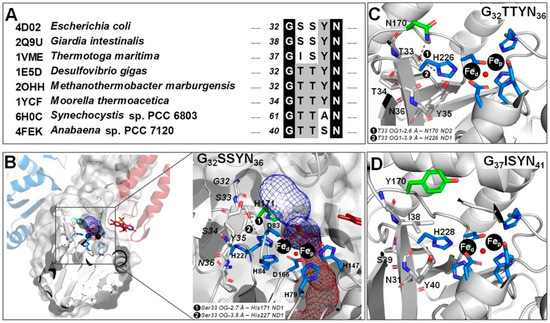