The gasification experiments of coal chars with CO2 were carried out isothermally, with K, Ca, Ni, and Zn chloride catalysts, adopting a thermal gravimetric analyzer (TGA) from 800 to 1100 °C. The kinetic characteristic of the samples were described using the volumetric model (VM), the grain model (GM), and the random pore model (PRM). The morphology patterns of the samples were tested applying X-ray diffraction (XRD) and the catalytic mechanisms concerning the phase changes were proposed. The results confirm that the gasification rate and char reactivities are enhanced by K, Ca and Ni chlorides, while ZnCl2 inhibited the process. The catalysis ability shows the following cation order: Ca > K > Ni > Zn. Among the models described above, PRM was proven to give the best fitting value and hence adopted to kinetics parameters calculation. The activation energies in promoting conditions were lower than that of the uncatalyzed cases. In view of the catalytic mechanism, the K metals tend to form intermediate complexes and repeatedly connect with coal char, while the Ca species may follow the oxidation-reduction mechanism and the Ni metals catalyze the gasification process. View Full-Text
Keywords: char gasification; catalytic kinetics; catalytic mechanisms; metal chlorides char gasification; catalytic kinetics; catalytic mechanisms; metal chlorides
►▼ Show Figures 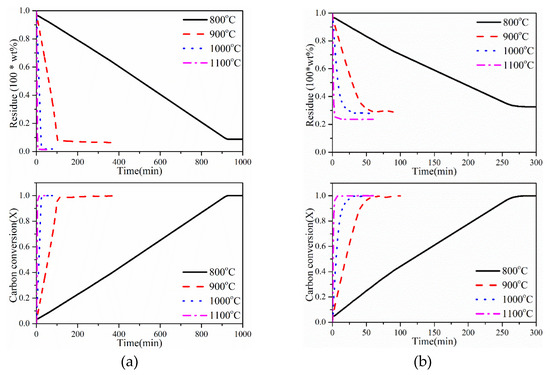