The “Green” FMOs: Diversity, Functionality and Application of Plant Flavoproteins

Baeyer-Villiger monooxygenases (BVMOs) are flavin-dependent enzymes that primarily convert ketones to esters, but can also catalyze heteroatom oxidation. Several structural studies have highlighted the importance of the ‘control loop’ in BVMOs, which adopts different conformations during catalysis. Central to the ‘control loop’ is a conserved tryptophan that has been implicated in NADP(H) binding. BVMOAFL210 from Aspergillus flavus, however, contains a threonine in the equivalent position. Here, we report the structure of BVMOAFL210 in complex with NADP+ in both the ‘open’ and ‘closed’ conformations. In neither conformation does Thr513 contact the NADP+. Although mutagenesis of Thr513 did not significantly alter the substrate scope, changes in peroxyflavin stability and reaction rates were observed. Mutation of this position also brought about changes in the regio- and enantioselectivity of the enzyme. Moreover, lower rates of overoxidation during sulfoxidation of thioanisole were also observed. View Full-Text
Keywords: Baeyer-Villiger monooxygenase; lactone; ester; regioselectivity Baeyer-Villiger monooxygenase; lactone; ester; regioselectivity
►▼ Show Figures 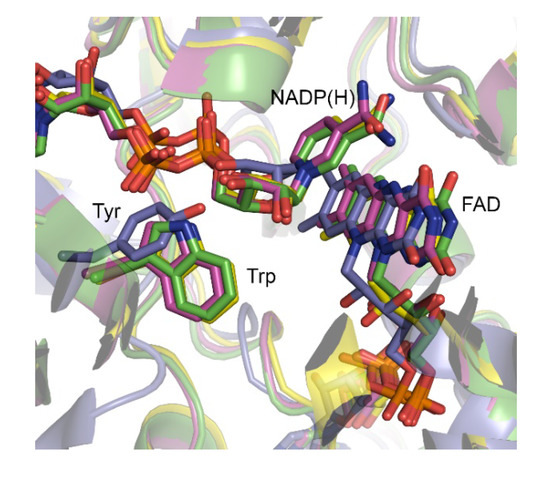