:
This article describes the synthesis of stereolithography (SLA) 3D-printed catalyst-impregnated devices and their evaluation in the organocatalyzed Friedel–Crafts alkylation of N–Me–indole with trans-β-nitrostyrene. Using a low-cost SLA 3D printer and freeware design software, different devices were designed and 3D-printed using a photopolymerizable resin containing a thiourea-based organocatalyst. The architectural control offered by the 3D-printing process allows a straightforward production of devices endowed with different shapes and surface areas, with high reproducibility. The 3D-printed organocatalytic materials promoted the formation of the desired product up to a 79% yield, although with longer reaction times compared to reactions under homogeneous conditions.
Keywords:
heterogeneous catalysis; stereolithography; 3D printing; additive manufacturing; thiourea

Three-dimensional (3D) printing, also known as additive manufacturing, refers to the process of producing 3D solid objects through the successive layering deposition of material. In the last few years, 3D printing has drawn attention in various fields due to its ability to create prototypical parts according to virtual concepts, and this technology has had very fast development in many scientific applications, such as in dentistry and odontology fields [1,2], medical implants [3], the aerospace and aircraft industries [4,5], jewelry making [6], clothes-manufacturing [7], food processing [8], and architecture [9].
Chemistry has also been drawn to 3D printing [10]; the technique represents an enabling tool in pharmaceutical and biological applications [11,12], as well as in organic synthesis [13], where sensors [14] and fluidic devices [15,16,17,18,19] were created. Three-dimensional printing applications range from the educational field, with the fabrication of molecular models [20] and cheap lab equipment [21], to the Active Pharmaceutical Ingredient (API) industry, where APIs such as Spritam are manufactured with a 3D-printing system [22].
Advantages of 3D-printing technology are related to its accessibility due to a thriving open-source community, to high customization freedom and cost-effectiveness (3D-printed objects cost less than those sold by supply companies), and to its sustainability in terms of employed materials and amount of generated waste.
Continuing our developments in the application of 3D-printing technology in organic synthesis [13,19], we investigated the design and the creation of stereolithography (SLA) 3D-printed catalytically active devices to be used as catalysts in synthetic transformations. SLA technology is the first patented 3D-printing technology [23], and the process works by focusing an ultraviolet (UV) light onto a vat of photopolymer resin. UV light is used to draw a preprogrammed design onto the surface of the photopolymer. Because photopolymers are photosensitive under ultraviolet light, the resin is solidified and forms a single layer of the desired 3D object. This process is repeated for each layer upon completion of the desired object.
The possibility to create a 3D-printed device containing an embedded organocatalyst is very attractive, since the catalyst could be immobilized on solid support without the need for any chemical modification of the catalyst itself. The supported catalytic species could easily be removed upon a completed reaction and, possibly, be reused in further reactions. Advantages of this approach are similar to those of immobilized species, such as easily completed isolation and purification procedure [24].
Only very few examples of this approach are known so far. Sotelo, Gil, and coworkers developed a 3D-printed woodpile structure composed of a 5 wt % catalytic copper species immobilized onto Al2O3 support. Those devices showed good catalytic efficacy and good recyclability in different Ullmann reactions employed for the synthesis of imidazoles, benzimidazoles, and N-aryl amides [25]. In 2017, the same group reported that a 3D-printed woodpile that was made up of sintered Al2O3 could act as a Lewis acid catalyst in the synthesis of biologically active 1,4-dihydropyridines and 3,4-dihydropyrimidin-2(1H)-ones under solventfree conditions with microwave irradiation [26]. In another example, Hilton filed a patent application disclosing the realization of 3D-printing impregnated plastics for chemical reactions [27]. Magnetic stirring-bar hosts were created by a stereolithographic technique; a p-toluenesulfonic acid catalyst was embedded in the photopolymer resin, and the “catalytic stirrer” was used to promote a Mannich reaction in good yields.
In order to further expand the classes of embedded catalysts in 3D-printed devices, we investigated the incorporation of different organocatalysts into photocurable resins, which were subjected to a 3D-printing stereolithographic process for the creation of functionalized devices.
For this, we selected thiourea (4) as the catalyst of choice for our preliminary investigations. This organocatalyst is robust, highly versatile, and, among other attributes, able to promote the Friedel–Crafts alkylation of N–Me–indole (1) with trans-β-nitrostyrene (2) to afford the 3-substituted indole derivative (3) in quantitative yields (Scheme 1) [28].
Some issues need to be addressed in the development of the embedded catalyst in 3D-printed devices: (i) resin compatibility towards used solvent and reactants; (ii) 3D printability of resin with modified composition; (iii) catalyst leaching phenomena during the chemical transformation; and (iv) identification of the optimal device shape to be 3D-printed.

In conclusion, in this work, 3D-printed thiourea-embedded devices were designed, prepared, and used in an organic transformation. Stereolithography 3D-printed catalytically active devices differing in shape and accessible surface were designed. Three-dimensionally printed organocatalytic materials were employed in the Friedel–Crafts alkylation of N–Me–indole with trans-β-nitrostyrene, leading to the formation of the desired product up to a 79% yield, although longer reaction times were required compared to the reaction under homogeneous conditions. The architectural control offered by the 3D-printing process allowed the straightforward production of devices endowed with different shapes and surface areas, with high reproducibility. More studies are needed related to the characteristics and the properties of the monomer to be polymerized to increase catalyst accessibility, and improve catalytic efficiency and the reaction rate. Nevertheless, in the future, the same 3D-printing approach might be used to fabricate catalytically active objects that are able to efficiently promote other organic reactions, including stereoselective transformations catalyzed by chiral catalysts.

The following are available online at https://www.mdpi.com/2073-4344/10/1/109/s1: details of the procedure and NMR traces of products reported in Supporting Information.

Methodology and experimental work, S.R.; conceptualization and supervision, M.B.; experiment work, A.P.; data analysis, L.M.R. All authors have read and agreed to the published version of the manuscript.

This research was funded by the Università degli Studi di Milano, PSR 2018 granted to S. Rossi. 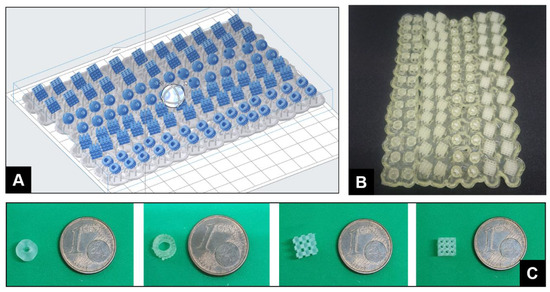 1 Calculated by 1H NMR using 1,3,5-trimethoxybenzene as internal standard. 2 Reaction time, 48 h.
© 2020 by the authors. Licensee MDPI, Basel, Switzerland. This article is an open access article distributed under the terms and conditions of the Creative Commons Attribution (CC BY) license (http://creativecommons.org/licenses/by/4.0/).
We use cookies on our website to ensure you get the best experience. Read more about our cookies here.
Accept
We have just recently launched a new version of our website. Help us to further improve by taking part in this short 5 minute survey here. here.
Never show this again