Communication
A Cellulose Electrolysis Cell with Metal-Free Carbon Electrodes
by

:
Biomass raw materials, including agricultural residues, collected weeds, and wood chips, are important feedstocks for hydrogen production. Numerous attempts have been made to electrolyze biomass directly or indirectly to hydrogen because these processes allow for the production of hydrogen with less power consumption than water electrolysis. However, expensive metal-based electrocatalysts are needed, especially for the cathode reaction, in the electrolysis cells. Results from the present study demonstrate the production of hydrogen directly from cellulose, using an optimal mesoporous carbon as the cathode in addition to a partially oxygenated carbon anode at a temperature of 150 °C, with an electrolysis onset voltage of ca. 0.2 V, a current density of 0.29 A cm−2 at an electrolysis voltage of 1 V, and a current efficiency of approximately 100% for hydrogen production. These characteristics were comparable to those recorded when using a Pt/C anode and cathode under the same conditions. The sp2 planes of the carbon allowed π electrons to be donated to protons at the cathode. In addition, the mesoporous structure provided a sufficient amount of sp2 planes on the surface of the cathode.
Keywords:
cellulose; electrolysis; hydrogen production; metal-free electrodes

Hydrogen is a cleaner energy source and more reliable carrier than fossil fuels [1,2,3]. A major challenge in the utilization of hydrogen as a fuel is the lack of sustainable production methods [4,5]. Water electrolysis ensures low-carbon-footprint hydrogen production using renewable energy resources, but has limitations of high cost; the electricity energy required is approximately 5 kWh (Nm3)−1 [6]. Furthermore, the use of precious metals as electrocatalysts is needed for the anode and cathode reactions [7]. Operating an electrolysis cell at elevated temperatures provides some advantages over water electrolysis at room temperature [8,9]. The onset cell voltage decreased as temperature increases (1.16 V at 130 °C), due to the decrease in the enthalpy required for water splitting [10,11]. In addition, at elevated temperatures, various biomass derivatives, including alcohols, ethylene glycol, glycerol, and lignin, can also be used as hydrogen resources, which enables hydrogen production at lower onset cell voltages (0.4–0.5 V at 80–150 °C), depending on the fuel species or operation temperature [12,13,14].
Electrolysis at elevated temperatures is also advantageous for the kinetic characteristics of the used electrodes. A recent report indicated a lignocellulosic biomass electrolysis cell using partially oxygenated carbon as the anode at temperatures above 125 °C [15,16]. However, Pt was still necessary for the hydrogen evolution reaction (HER) at the cathode in this cell. Although carbides, sulfides, and phosphides of transition metals (e.g., Mo [17,18], W [19], and Co [20,21]) have received attention as important HER catalysts, their material costs are not much less than that of Pt. The present study describes an inexpensive mesoporous carbon that exhibited HER activity comparable to that obtained for a Pt/C cathode. Consequently, efficient hydrogen production was achieved using cellulose as a model biomass at temperatures between 100 and 150 °C in an electrolysis cell with a metal-free anode and cathode.

Vulcan XC-72R, KB EC-600JDK, AB, and MgO-templated porous carbons (MJ10, MJ30, MJ150, and MH) were purchased from Cabot (Billerica, MA, USA), Akzo Nobel (Amsterdam, Netherlands), Denka (Tokyo, Japan), and Toyo Tanso (Osaka, Japan), respectively. The carbon samples were mixed with 85% H3PO4 (Wako Chemicals, Osaka, Japan) in a mixer (Sankyo Seiki, Thinky AR-100, Kyoto, Japan) for 15 min. The mixture was printed on the surface of a gas diffusion electrode (Toray, TGP-H-090, Tokyo, Japan). All carbon loadings were adjusted to 8 mg cm−2, unless otherwise stated. A Pt/C (Electrochem, Woburn, MA, USA, Pt loading: 2 mg cm−2) was employed as a control anode and cathode. A proton-conducting Sn0.9In0.1P2O7-polytetrafluoroethylene (PTFE, Mitsui-Du Pont, Tokyo, Japan) membrane (thickness: 200 μm) was selected as the electrolyte, as reported previously [38,39]. Cellulose (Wako Chemicals, Osaka, Japan) was used as the model biomass without further purification.
Nitrogen isotherms at −196 °C were obtained using a Nihon Bell Belsorp-28SA instrument (Osaka, Japan) after degassing at 200 °C. SEM and TEM micrographs were taken using Keyence VE-8800 (Osaka, Japan) and Jeol JEM2100F (Tokyo, Japan) instruments, respectively. Raman spectra were recorded using a Jasco NRS-1000 spectrophotometer (Tokyo, Japan). ESR measurements were performed using a Jeol JES-FE3XG instrument with a Mn2+ marker. The samples were evacuated in a quartz tube at room temperature. The outlet gases from the electrodes were analyzed using a Pfeiffer Vacuum ThermoStar mass spectrometer (MS; Asslar, Germany).
Electrolysis cells were fabricated as follows. Cellulose (15 mg) was impregnated with 85% H3PO4 (ca. 270 mg), and the paste was stored on the surface of the anode in a similar manner to that reported previously [15,16]. The electrolyte membrane was sandwiched between the anode and cathode with effective areas of 2.0 and 0.5 cm2, respectively. The cathode was exposed to Ar at a flow rate of 100 mL min−1. Electrolysis of cellulose was conducted by the four-probe method using a Solartron 1287 potentiostat and a Solartron 1260 impedance/gain-phase analyzer (Hampshire, UK). The I–V curves were recorded at a scan rate of 20 mV s−1. Impedance spectra were obtained at an anodic bias voltage of 0.4 V in the frequency range from 0.1 to 106 Hz. An equivalent circuit model was used for the fitting of the impedance data.

This research was funded by a Kakenhi Grant-in-Aid (Nos. 17H01895 and 17K14834) from the Japan Society for the Promotion of Science (JSPS), and by a grant (No. JPMJCR18R2) from the CREST program of the Japan Science and Technology Agency (JST). 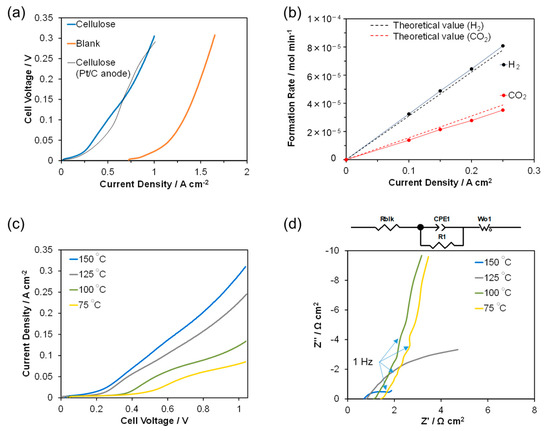 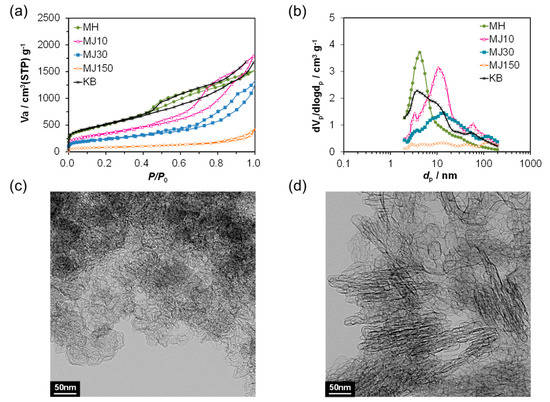 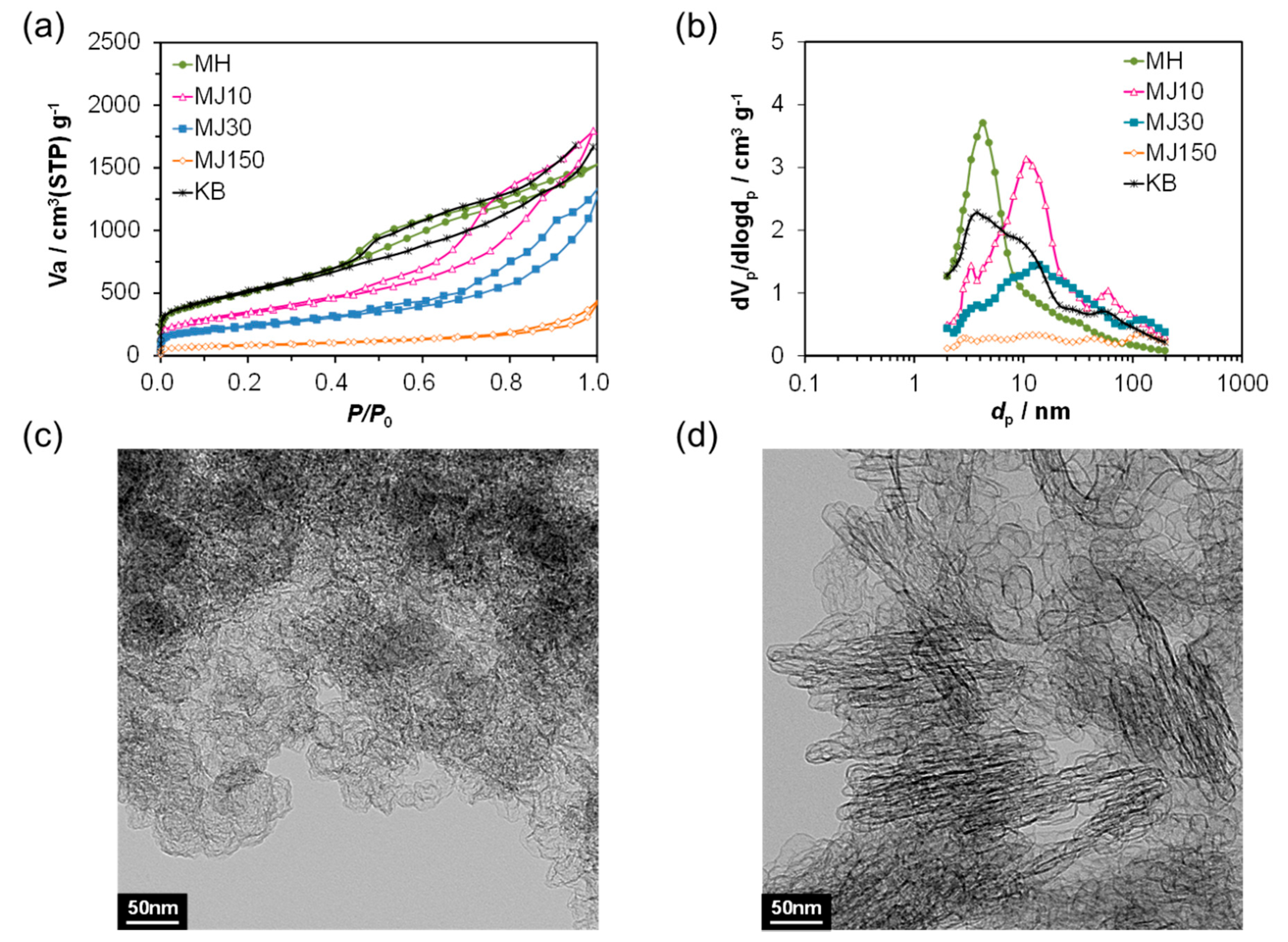 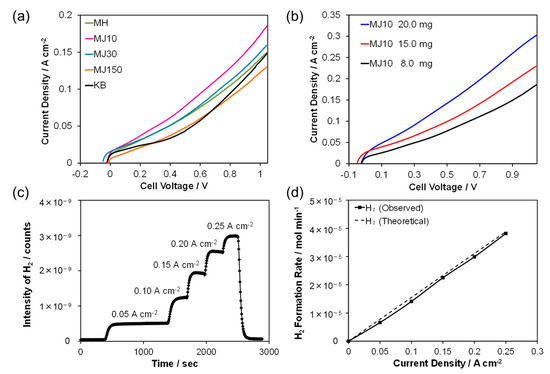 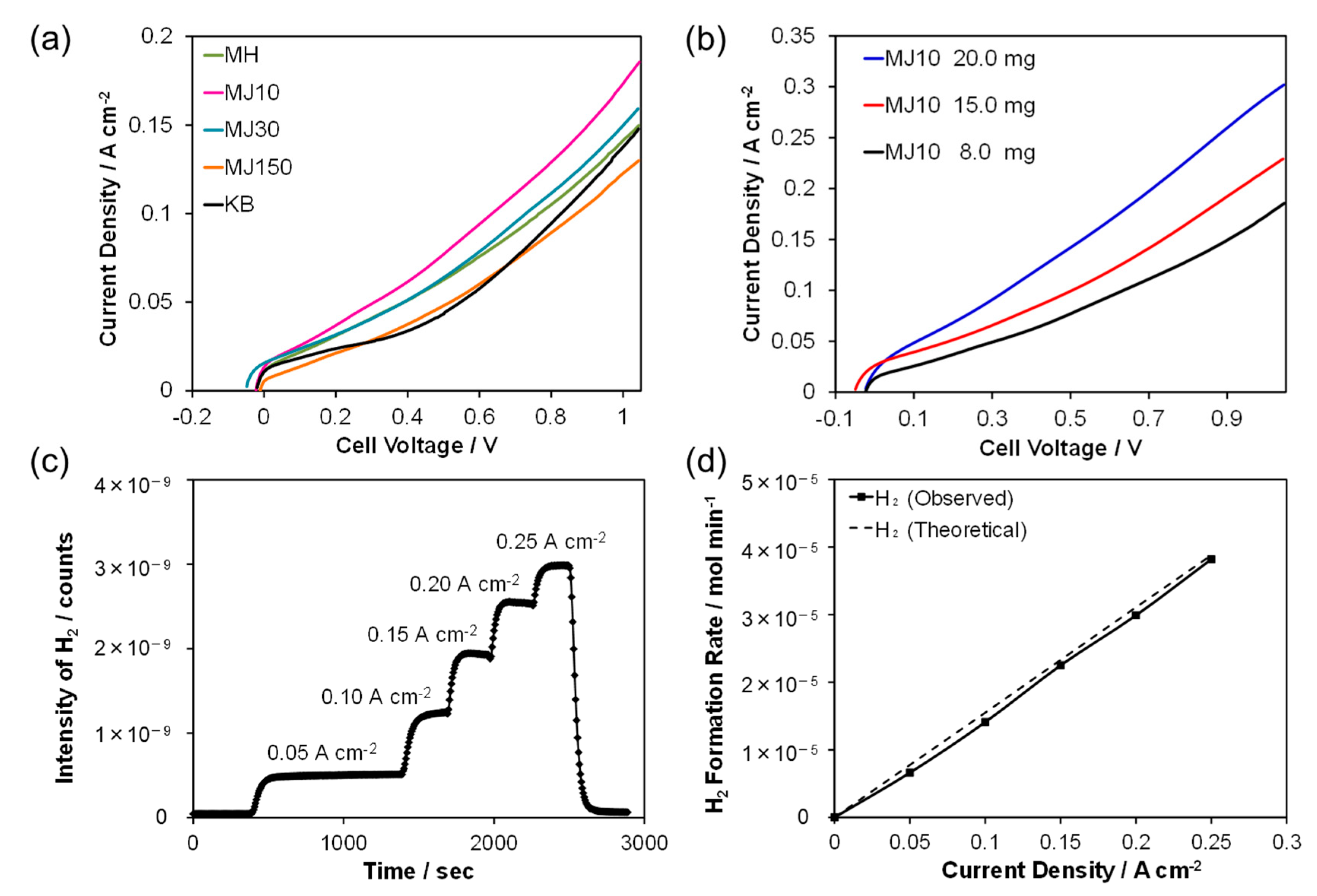 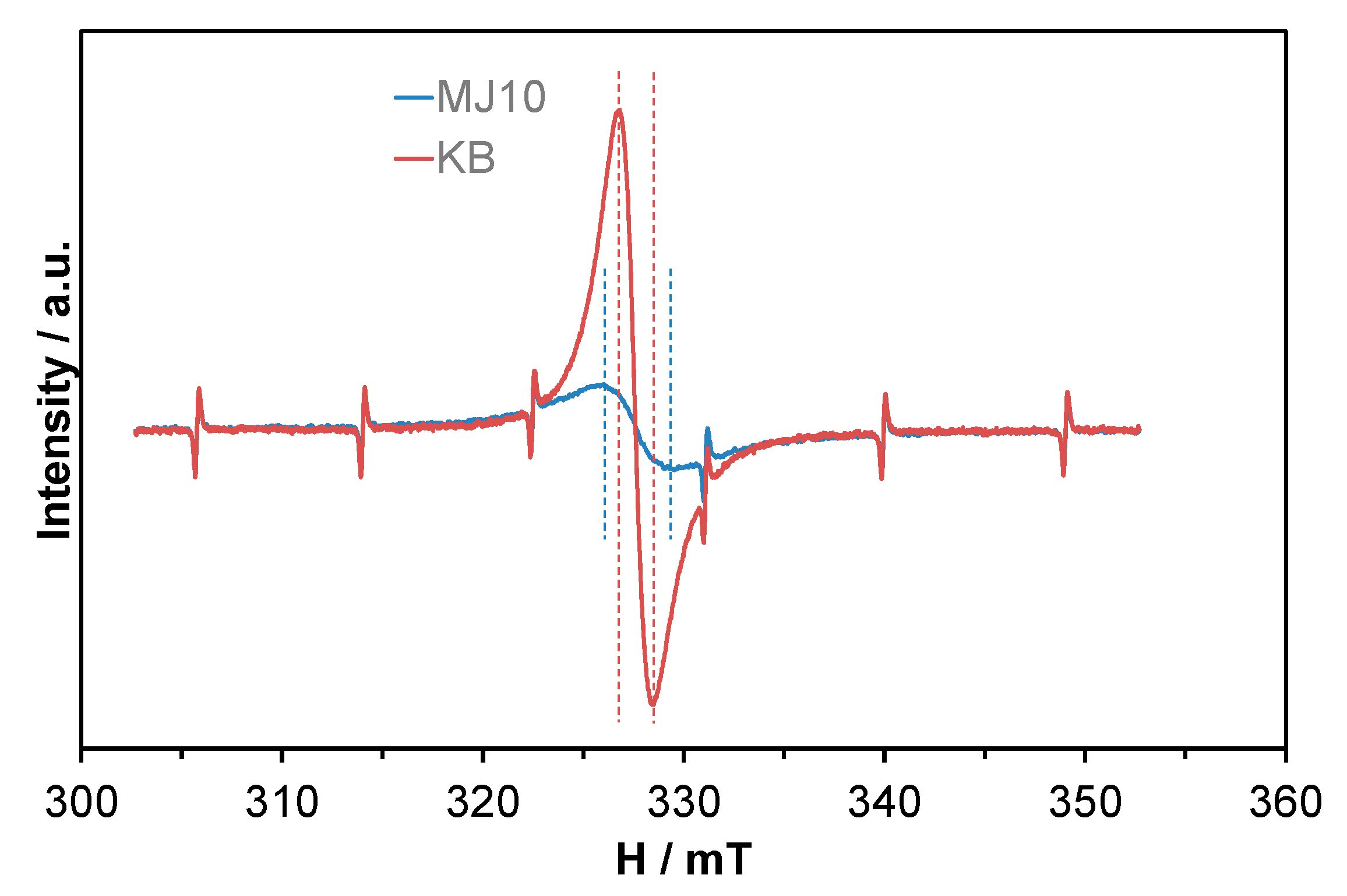 Table 1. Textural properties of KB, MH, MJ10, MJ30, and MJ150.
Table 1. Textural properties of KB, MH, MJ10, MJ30, and MJ150.
Vp = pore volume determined using the BJH method; dp = BJH pore diameter; dav = BJH pore average diameter; SBET = specific surface area determined using the Brunauer–Emmett–Teller (BET) method.
© 2020 by the authors. Licensee MDPI, Basel, Switzerland. This article is an open access article distributed under the terms and conditions of the Creative Commons Attribution (CC BY) license (http://creativecommons.org/licenses/by/4.0/).
We use cookies on our website to ensure you get the best experience. Read more about our cookies here.
Accept
We have just recently launched a new version of our website. Help us to further improve by taking part in this short 5 minute survey here. here.
Never show this again