Representing Others in a Public Good Game
Previous Article in Journal

To address our research questions, we implemented a within-subjects design which consists of two conditions: the “default punishment condition” (D-condition) and the “standard punishment condition” (S-condition). We alternated the order of the two conditions, enabling us to control for potential order effects. This resulted in including two sequences in our experiment: the DS sequence, in which the D-condition is followed by the S-condition and the SD sequence, in which the S-condition is followed by the D-condition.
In each condition, subjects interacted in a two-stage game for 10 periods. The group composition remained fixed across all 20 periods within a sequence (Partners’ matching protocol). The first stage of the game was common to both conditions involving a voluntary contributions mechanism game with linear payoffs. During the first stage, subjects, being randomly assigned to a four-person group, are privately endowed with 20 tokens each and have to decide how many of these to keep for themselves and how many to contribute to a public good (described to subjects as “project”). For each token kept, each subject earns 1 Money Unit (MU); whereas, for each token contributed the return is equal to 0.5 MUs, resulting in a total of 2 MUs for the whole group. Subjects make their decisions simultaneously and in private. At the end of the first stage they are informed about the sum of the contributions to the public good made by the whole group and about their own first stage income. The payoff function for a given subject in the first stage is given by Equation (1): where gi (0 ≤ gi ≤ 20) denotes the number of tokens contributed to the public good by group member i.
After the first stage has finished, a second stage follows. The structure of the second stage differs between the D-condition and the S-condition. We thus discuss the second stage of each condition in turn.

All sessions took place in April and May 2008 in the Centre for Decision Research and Experimental Economics (CeDEx) lab. Recruitment was conducted via the software ORSEE ([21]) at the University of Nottingham using subjects from a university-wide pool of registered students. All conditions were computerized and programmed with the software z-Tree ([22]). At the beginning of each sequence, subjects received instructions for the first condition and at the end of it for the second condition. Subjects were informed that the session consists of two conditions in order to reduce the possibility for having wrong expectations about the nature of the experiment. However, they were not told what will happen in the second condition. All participants answered several test questions, concerning the calculation of payoffs for various hypothetical configurations of behaviour. None of the conditions proceeded until every subject had answered these questions correctly. Each of the two sequences was conducted twice, yielding a total of 4 sessions. In the DS sequence 40 subjects participated, resulting in 10 independent observations; while in the SD sequence 36 subjects participated, resulting in 9 independent observations.
At the end of a sequence, subjects were privately paid according to their accumulated earnings from all 20 periods, using an exchange rate of £0.015 per MU. Average earnings per sequence were as follows: £10.45 for the DS sequence and £9.48 for the SD sequence. Sessions lasted, on average, 75 min. 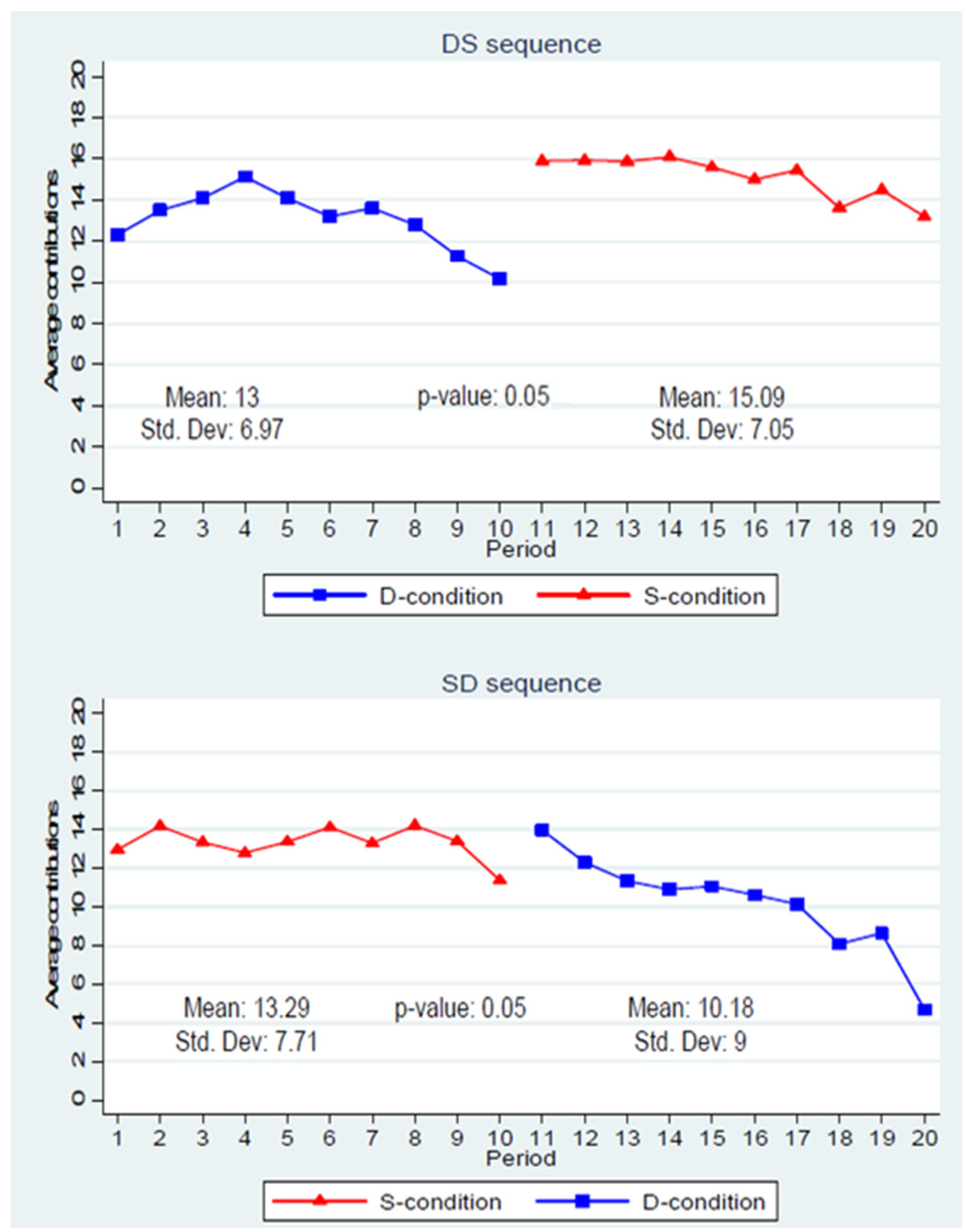 Figure 1 shows that contributions over time are stable in both of the S-conditions in either sequences. This is in line with existing findings in the literature of public good games with punishment (e.g., [1]). However, we observe that the contribution patterns of the D-conditions are not stable over time. In the SD sequence, contributions initially increase during the first half of the D-condition and then follow a decaying pattern over the second half. In the DS sequence, we observe that contributions decline over time. By performing a Wilcoxon sign rank test, we find significant within-subject differences across conditions in each sequence. Specifically, in relation to the S-condition, subjects contribute significantly less in the D-condition of the DS sequence (p = 0.05) and of the SD sequence (p = 0.05).5
Our econometric analysis corroborates these findings when we perform OLS regressions that test for differences across conditions within each sequence, controlling for time trends.6 We estimate four OLS regressions, in which the dependent variable is the contribution to the group account. In Models (1a) and (1b) we focus on the DS sequence and in Models (2a) and (2b) we focus on the SD sequence. The independent variables for Models (1a) and (2a) consist of a dummy variable for a condition and period, which is equal to the actual number of periods. In Models (1a) and (1b) the dummy variable called “S-condition” is equal to 1 for the S-condition and 0 for the D-condition, whereas in Models (2a) and (2b) the dummy variable called “D-condition” is equal to 1 for the D-condition and 0 for the S-condition. We include the interaction between the treatment dummy and period in Models (1b) and (2b). The regression results are reported in Table 1.

Table 2. The alleviation function—Regression results.
Notes: Ordered probit estimates. Standard errors are presented in parentheses (clustered on independent matching groups). The variable “Player j’s absolute negative (contribution) deviation” is the absolute value of the actual deviation of player j’s contribution from player i’s contribution, when player j’s contribution is below player i’s contribution; and zero otherwise. The variable “Player j’s positive (contribution) deviation” is constructed in an analogous way. The dummy variable “D-condition (DS sequence)” equals 1 for the D-condition of the DS sequence and 0 for the D-condition of the SD sequence. ** denotes significance at the 5-percent level, and *** at the 1-percent level.
The results from Table 3 indicate that the vertical intercept of the punishment function does not differ across the two sequences, since the coefficient of the dummy variable “S-condition (SD sequence)” is not statistically significant. The coefficients of the interaction terms are also insignificant, implying that the slope of the punishment function with regard both to negative and positive deviations is the same, irrespective of the sequence. The only variable that has a significant effect on the assignment of punishment is the absolute negative deviation from the punisher’s contributions: a subject punishes a co-player more, the less the co-player contributes relative to the punisher. This is in line with previous literature from public good games (e.g., [1,23]) indicating that the punishment function is negatively sloped.

We would like to thank James Cox, Robin Cubitt, Eamonn Ferguson, Simon Gächter, John Hey, the handling editor, Ananish Chaudhuri, and three anonymous reviewers for valuable comments and suggestions. The paper has also benefited from comments by seminar participants at the University of Nottingham and the ESA Meetings in Innsbruck (2009) and in Copenhagen (2010). Financial support from the ESRC (PTA-030-2005-00608) and the University of Nottingham is gratefully acknowledged.