Possibilities of Electromagnetic Penetration of Displays of Multifunction Devices

Constant technical progress means that more and more advanced electronic devices are present in every area of our lives. We stop paying attention to them, treating them as natural elements of our environment. We gladly use the functions which they offer, using them both at work and outside of it.
Most of us are aware that valuable information should be protected from accidental disclosure [1,2,3]. This applies to monitors, keyboards, printers and so on. Each device is a source of valuable emissions which allow to reconstruct primary information. The information become visible, readable and intelligible ([4,5,6,7], Figure 1). It is possible because information is processed in graphic form. Such sources of electromagnetic emissions are known and popular; therefore, they are protected. In these cases, both hard and soft solutions are used. Electromagnetic shielding, electromagnetic gaskets, power and signal filters, and ferrites are the most popular technical solutions to limit levels of electromagnetic emissions [8,9]. To counteract the electromagnetic eavesdropping process, a software solution can be used [3]. The solution does not limit levels of electromagnetic emissions, but it eliminates the distinctive features of the emissions which would allow the reconstruction of primary information (Figure 2). There are also additional proposed sources of noises which can “cover” the valuable emissions [10]. However, in this case, the noise levels have to be higher than levels of valuable emissions. This is not a good solution in terms of protecting the electromagnetic environment.
However, new technologies are used not only to process typical classified information. Technologies such as monitors—both smaller and bigger—are applied in various electronic devices. They exist in medicine and communication. Displayed information can be important for us [11,12]. The above applies to medical devices and biometric identification, which are used commonly. Parameters of our state of health very often are displayed in graphic form on screens [13,14]. However, we entrust all our secrets to electronic devices, forgetting that they can be valuable not only for us. Especially in large companies, where very extensive systems are used by many users, during the personalization of tasks, leakage of seemingly irrelevant data may occur. Modern copying or printing devices are equipped with advanced touch displays that not only allow to a configuration of the devices, but also allow to view tasks, e.g., printing, previewing the content of documents, user names. This information may be disclosed by electromagnetic emission [15,16,17,18,19]. Then they may pose a threat to the interests of companies.

There is a lot of talk about typical sources of unwanted emissions in the form of computers, scanners, printers, computer monitors. However, there are many other devices that process data in graphic form. These are not always textual data. These are not always typical documents. Often these are graphical data on the functions provided by printers or the state of monitoring our health. In any case, these are data that should be protected.
This article presents the analysis of printer displays as sources of unwanted emissions.

Currently, even the cheapest printers are equipped with displays that facilitate their operation and execution of printing tasks (Figure 3). The menu of such a display is not extensive and contains only basic information about the configuration of the device.
The displays of multifunctional business devices can turn out to be a real mine of knowledge. By their nature, they are autonomous centers of small printing, enabling scanning, duplication, faxing, storage, and printing of documents by many users.
Data scanned or stored on the device can be sent to other users via Ethernet. Devices of this type are equipped with extensive control panels, the main elements of which are touch panels.
Of course, cooperation with the device is possible from the level of computer applications of users connected to the device via the Ethernet, but a lot of important information can also be obtained by monitoring the touch screen. The screen can display usernames, contact details of contractors, and even entered passwords, titles or contents of processed documents.
Therefore, such displays become sources of unwanted emissions. They can be modified limiting the level of sensitivity to electromagnetic infiltration [20,21,22,23]. However, such projects are expensive and not always feasible.

The touch screen consists of two “layers”, the first (internal) is a traditional LCD screen displaying information, the second (external) is a transparent touch panel enabling the user to interact with the device, usually by simply touching selected specific area using a finger. In this way, it is possible to: “click” icons, expand the menu, and finally enter text. An interface using Low Voltage Differential Signaling (LVDS) is usually used to illustrate information on an LCD screen, i.e., serial, differential data transmission dominating not only in the world of liquid crystal displays, which can be a source of unwanted emissions [24,25,26,27]. The Flat Panel Display Link (FPD-Link) standard is an implementation of this technique in the internal transmission of video data in television sets, monitors or laptops.

FPD-link was developed by National Semiconductor as an open standard for video data transmission between GPUs and LCD displays. It is a relatively simple transmission protocol, it lacks sophisticated mechanisms for grouping data bits or synchronization. In the transport layer, it uses the LVDS technique (each pair of wires is accompanied by a separate grounding wire). The main executive element on the transmitting side is the serializer converting parallel RGB data streams into serial data strings. The FPD-Link protocol serializer converts RGB video data, vertical (VS) and horizontal (HS) synchronization signals, as well as control data (DE) into serial data streams consisting of groups of 7 bits per one clock cycle. In the case of a typical video interface mapping the colors of pixels using 18 bits, 21 bits are converted in one clock cycle, forming 4 LVDS channels.
The FPD-Link interface can map both 6, 8 and 10-bit RGB color coding (Table 1) and send them in “single-mapping” or “dual-mapping” mode. In the “single-mapping” mode, the color data of all pixels of the image are processed sequentially, in the “dual-mapping” mode, these data are divided into two groups: even pixels and odd pixels. As mentioned above, the synchronization and control bits are additionally transmitted on the lines. The bit mapping in LVDS lines for the “single-mapping” mode is illustrated in the Table 1. In the “dual-mapping” mode, two separate maps are created, one for even pixels and the other for odd ones. Figure 4 shows the data serialization process in case of 8-bit coding. This section may be divided by subheadings. It should provide a concise and precise description of the experimental results and their interpretation, as well as the experimental conclusions that can be drawn.

Practical tests were conducted in an anechoic chamber (Figure 5), which attenuation parameter within the scope of the tests, i.e., from 1 MHz to 10 GHz was not lower than 100 dB. Compromising emanations were recorded by using the DSI-1550-A receiver, Microwave Downconverter DSI-1580-A (up to 22 GHz) and a set of R&S antennas: a rod antenna HE525 (100 Hz ÷ 30 MHz), a biconical antenna HE526 (30 MHz ÷ 200 MHz), a dipole antenna HE527 (200 MHz ÷ 1 GHz) and a double ridge horn antenna (EMCO, 1 GHz ÷ 18 GHz, Figure 6). The measurement bandwidths (BW) used for measurements include 5 MHz, 10 MHz, 20 MHz and 100 MHz [28].
A Software Raster Generator (SRG) [29,30] and a Signatec PDA1000 data acquisition card fitted with an 8-bit ADC converter were used correspondingly to generate the image of measured emissions correlated with data processed and to record the analyzed radiated emissions. The card allows users to take signal samples at a throughput of up to 1 GB/s. The SRG has implemented algorithms of digital processes of images and signals, e.g., median filters, histogram transformations, thresholding of the amplitude value of images, Gaussian filters, low pass filters, high pass filters, Laplacian filters, and smoothing edges (Roberts, Prewitt, Sobel). The use of SRG allows us to reconstruct primary information in form of images by the rasterization method [31].
To reconstruct primary information from a printer display, a rasterization method was used (SRG). For this process, the parameters of a displayed image have to be known: a length of the image line and a number of lines in the image. The length of the image line can be also determined by an autocorrelation function for the analyzed emission. Additionally, a Hardware Raster Generator (HRG) [30,32] was used in real time to generate the image of measured emissions correlated with the processed data. This is an external source for the vertical and horizontal sync signals of the measurement monitor image.
The recorded revealing emissions that were subject to further analyses occurred on frequencies: 235 MHz (Color Laser Jet Pro MFP M477fdn), 1177 MHz (HP 507), 411 MHz (Color Laser Jet Pro MFP M277dw) and 5 MHz (Lexmark MS610DE).
Based on the identified emissions correlated with the information displayed on the printer display images were reconstructed (Figure 7, Figure 8, Figure 9 and Figure 10). The images show that these types of emission sources are also valuable sources in the electromagnetic infiltration process [6,33,34,35,36].

The article presents the analysis of threats coming from sources of revealing emissions in the form of laser printer displays. Usually, such sources are considered harmless. However, they may contain important information related to the administrator’s data, username, name of the printed document, or content of the printed document. Often, the content of the document can be viewed by the user before printing. Large-scale displays allow this.
The tests were carried out for the selected printers. These printers worked in standby mode, which enabled displaying data on the tested display. During the tests, a main menu of the printer associated with graphic icons was displayed.
The reproduced images from the recorded revealing emissions show the sensitivity of this type of source to electromagnetic eavesdropping. All menu commands as well as the corresponding graphic images (icon) are legible.
In the further stage of the study, multifunctional devices that are equipped with large size displays will be analyzed (Figure 11). Attempts at reading access passwords by measuring the revealing emissions arising during the touch of selected characters on the touch keyboard will be made. Not without significance, from the viewpoint of electromagnetic infiltration, is the ability to display a graphic image (preview) of pages of a document before printing [10,37,38,39]. This property of displays will also be the object of research and analysis in terms of the possibility of obtaining data by non-invasive methods. 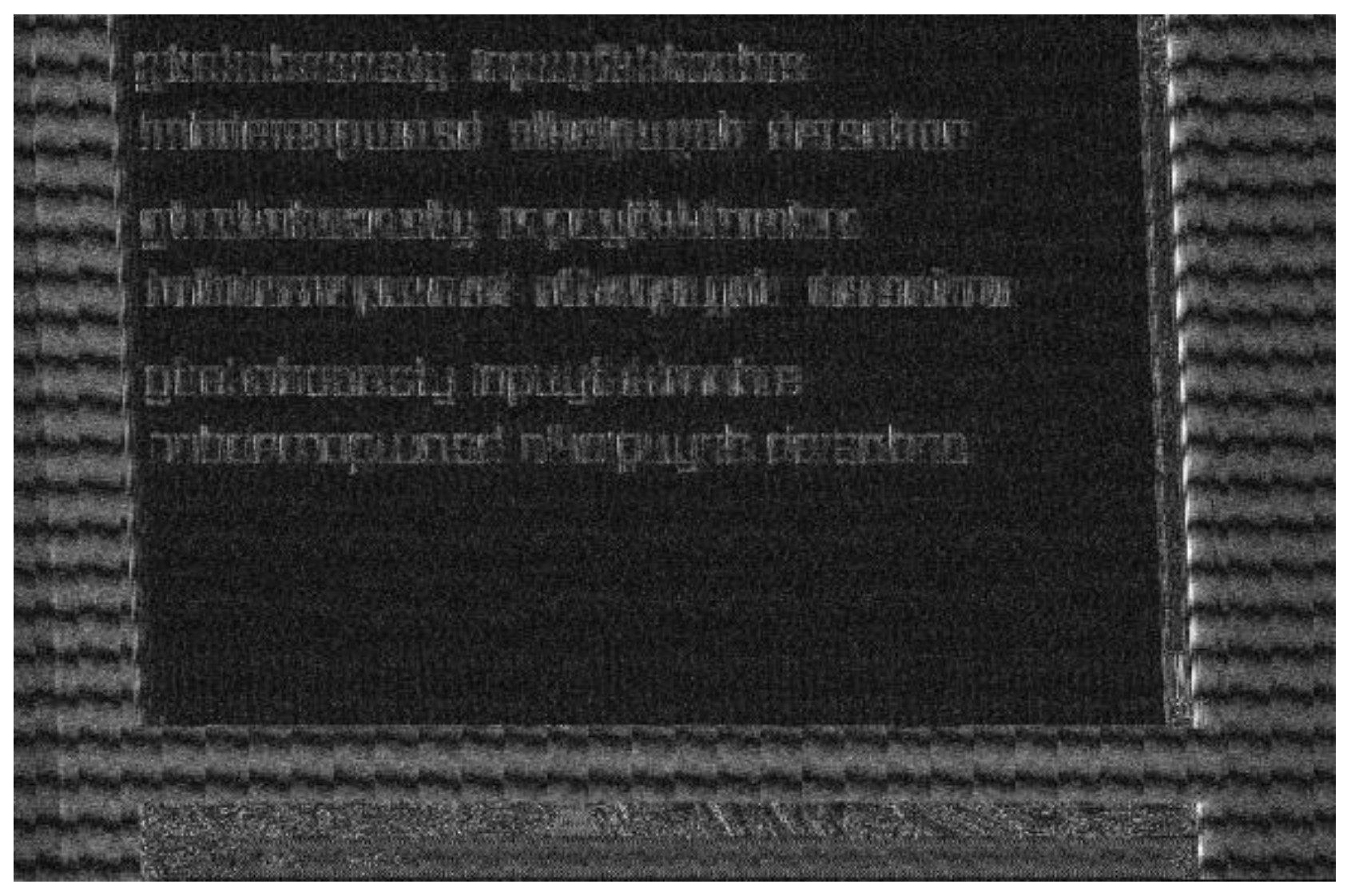 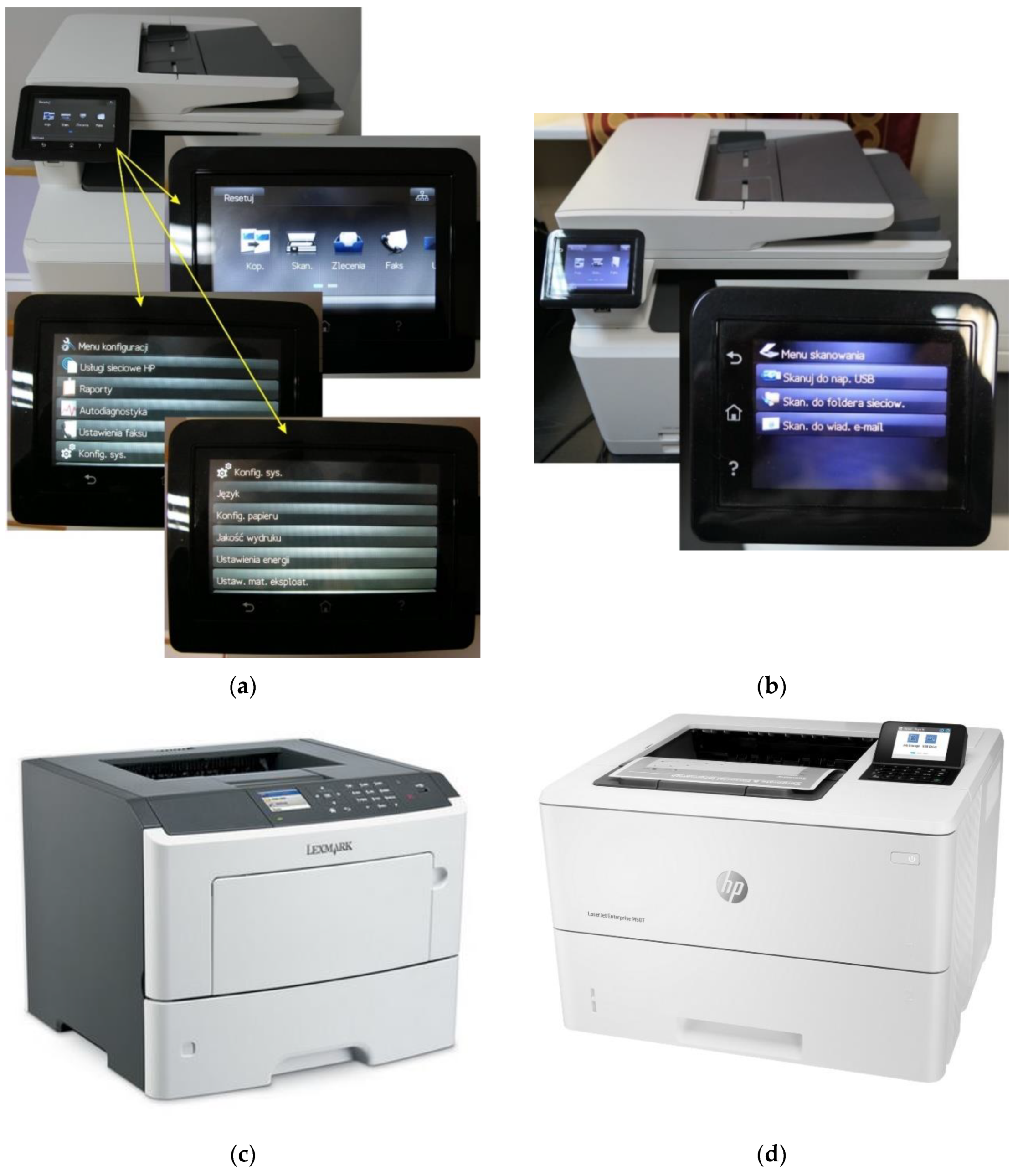 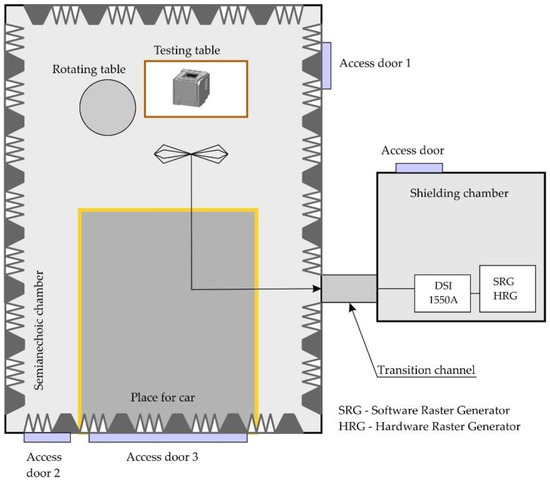 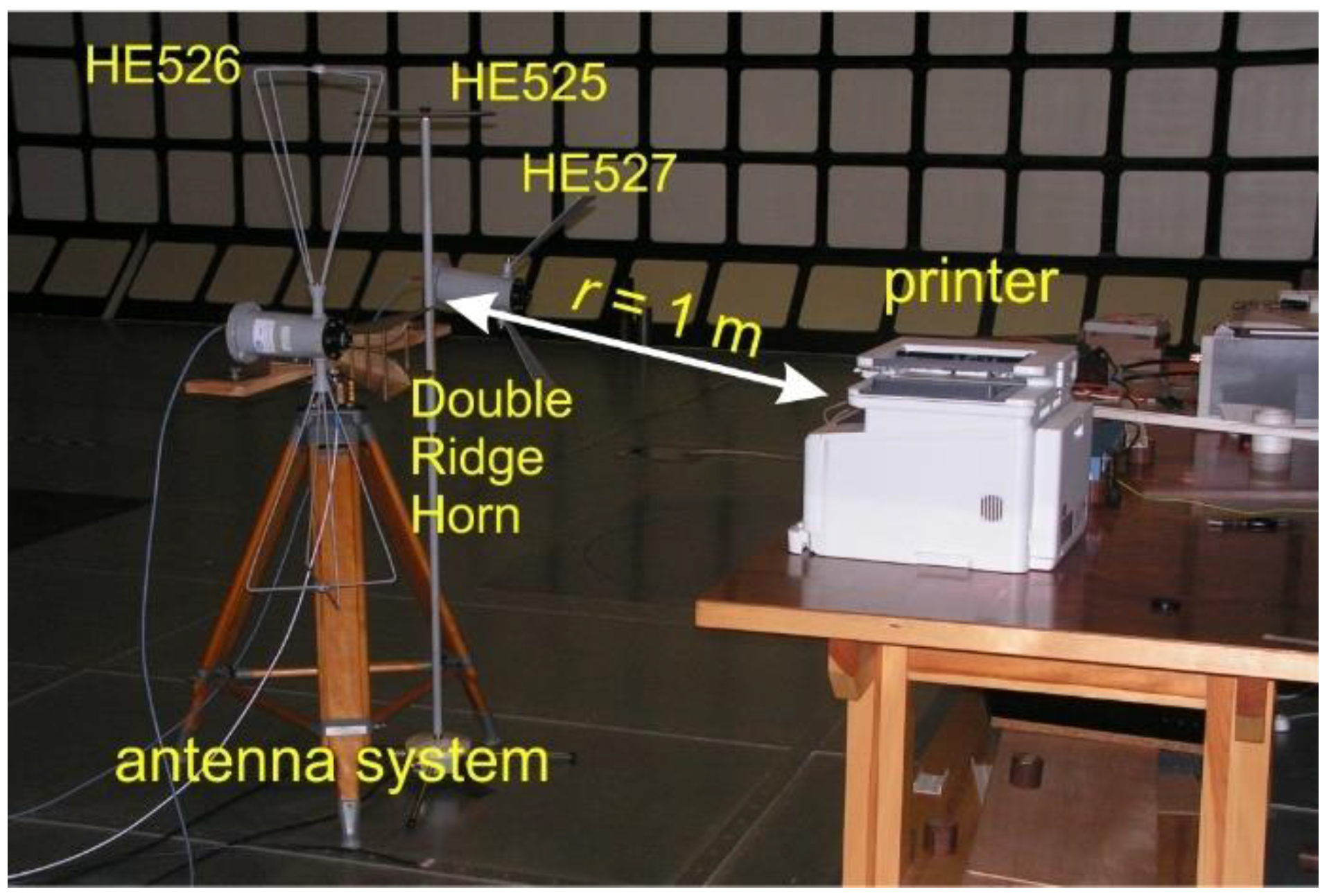 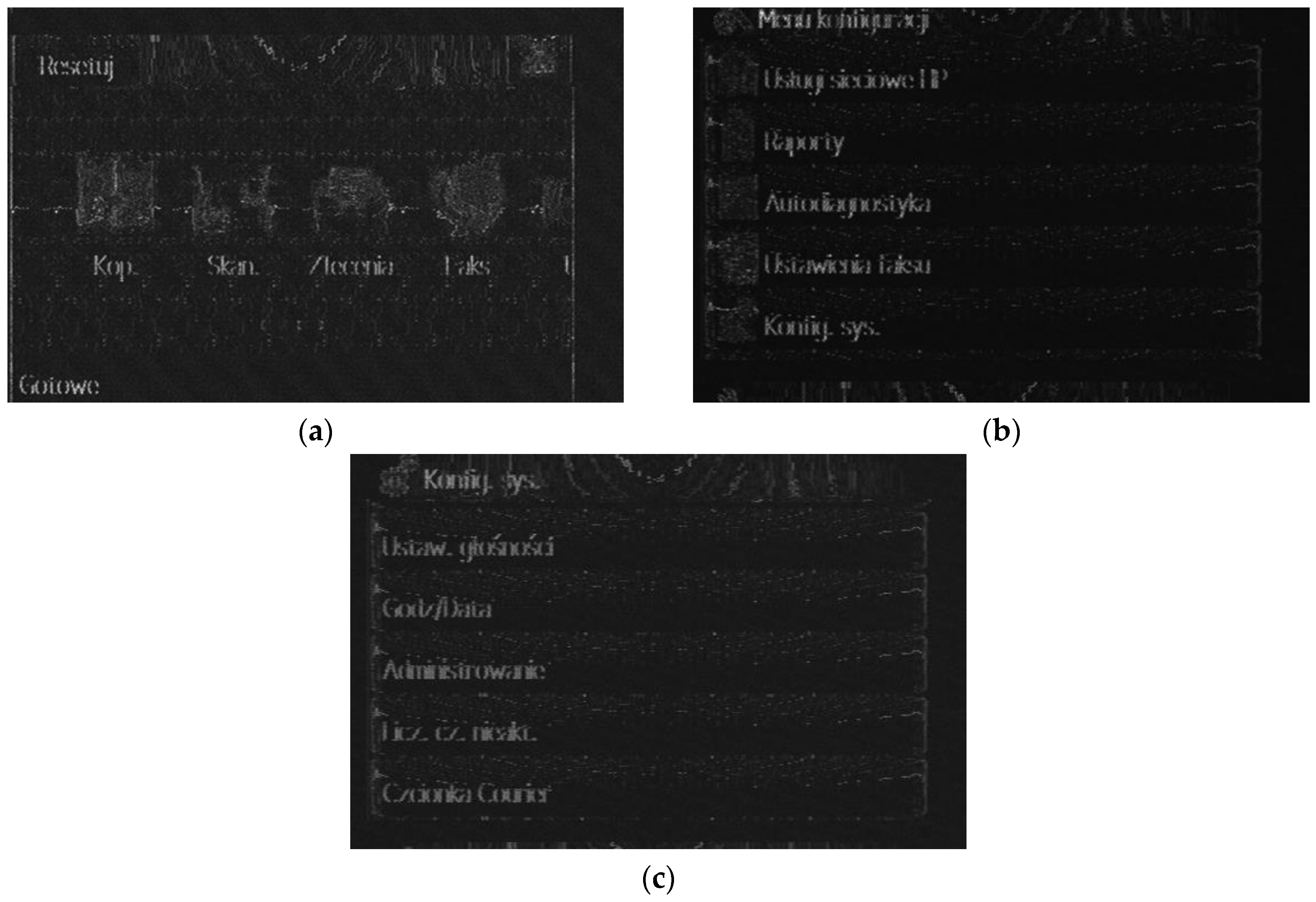 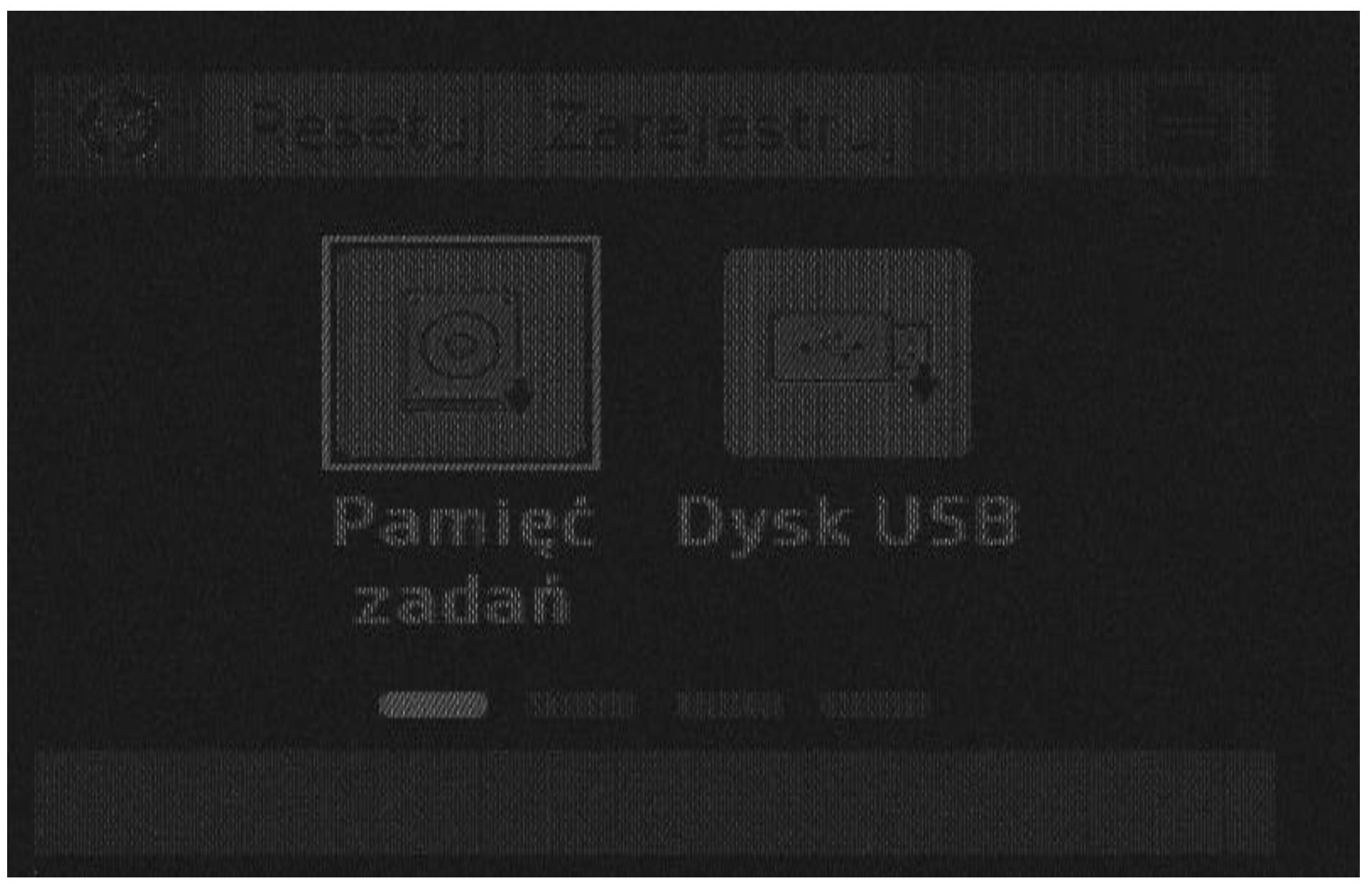 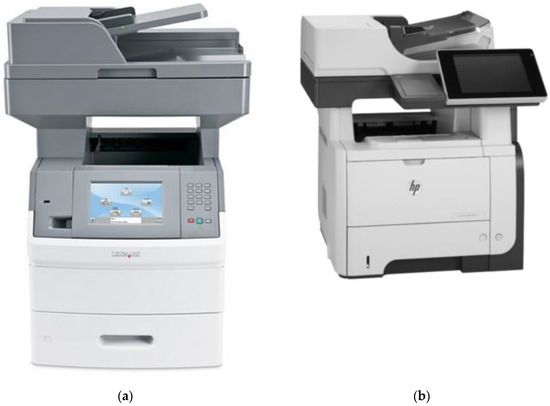 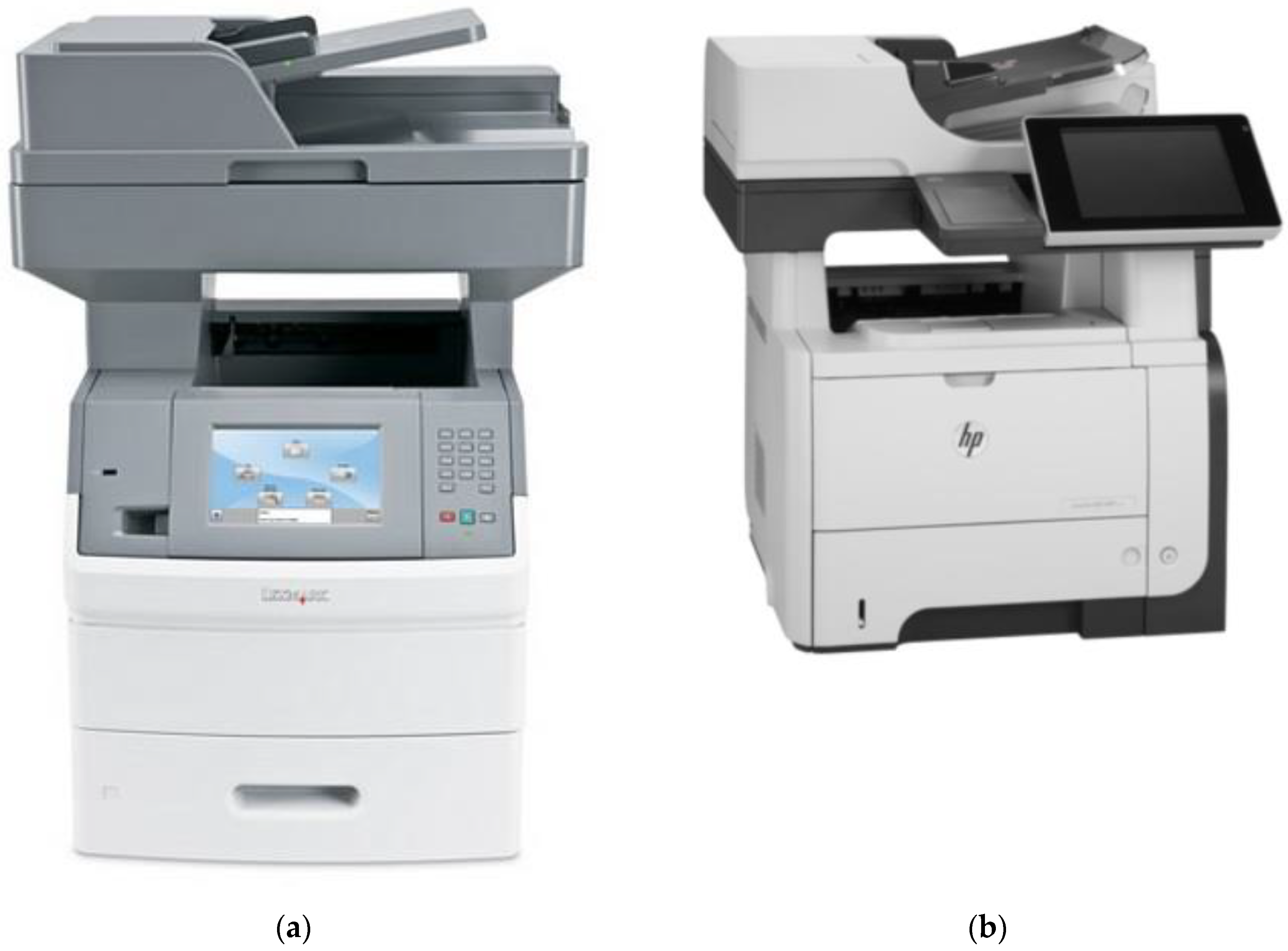