Importance and Applications of Robotic and Autonomous Systems (RAS) in Railway Maintenance Sector: A Review

RNN-ABC: A New Swarm Optimization Based Technique for Anomaly Detection

The exponential growth of internet communications and increasing dependency of users upon software-based systems for most essential, everyday applications has raised the importance of network security. As attacks are on the rise, cybersecurity should be considered as a prime concern while developing new networks. In the past, numerous solutions have been proposed for intrusion detection; however, many of them are computationally expensive and require high memory resources. In this paper, we propose a new intrusion detection system using a random neural network and an artificial bee colony algorithm (RNN-ABC). The model is trained and tested with the benchmark NSL-KDD data set. Accuracy and other metrics, such as the sensitivity and specificity of the proposed RNN-ABC, are compared with the traditional gradient descent algorithm-based RNN. While the overall accuracy remains at 95.02%, the performance is also estimated in terms of mean of the mean squared error (MMSE), standard deviation of MSE (SDMSE), best mean squared error (BMSE), and worst mean squared error (WMSE) parameters, which further confirms the superiority of the proposed scheme over the traditional methods. View Full-Text
Keywords: intrusion detection; swarm intelligence; artificial bee colony; neural networks; NSL-KDD intrusion detection; swarm intelligence; artificial bee colony; neural networks; NSL-KDD
►▼ Show Figures 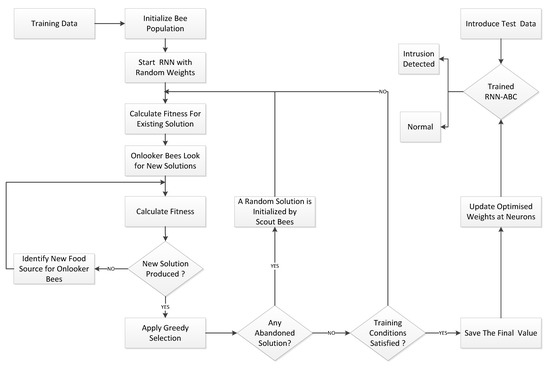