Spaceflight microgravity affects normal plant growth in several ways. The transcriptional dataset of the plant model organism Arabidopsis thaliana grown in the international space station is mined using graph-theoretic network analysis approaches to identify significant gene transcriptions in microgravity essential for the plant’s survival and growth in altered environments. The photosynthesis process is critical for the survival of the plants in spaceflight under different environmentally stressful conditions such as lower levels of gravity, lesser oxygen availability, low atmospheric pressure, and the presence of cosmic radiation. Lasso regression method is used for gene regulatory network inferencing from gene expressions of four different ecotypes of Arabidopsis in spaceflight microgravity related to the photosynthetic process. The individual behavior of hub-genes and stress response genes in the photosynthetic process and their impact on the whole network is analyzed. Logistic regression on centrality measures computed from the networks, including average shortest path, betweenness centrality, closeness centrality, and eccentricity, and the HITS algorithm is used to rank genes and identify interactor or target genes from the networks. Through the hub and authority gene interactions, several biological processes associated with photosynthesis and carbon fixation genes are identified. The altered conditions in spaceflight have made all the ecotypes of Arabidopsis sensitive to dehydration-and-salt stress. The oxidative and heat-shock stress-response genes regulate the photosynthesis genes that are involved in the oxidation-reduction process in spaceflight microgravity, enabling the plant to adapt successfully to the spaceflight environment. View Full-Text
Keywords: gene expression; network analysis; logistic regression; HITS algorithm; photosynthesis; carbon fixation; biological processes; spaceflight microgravity; Arabidopsis thaliana gene expression; network analysis; logistic regression; HITS algorithm; photosynthesis; carbon fixation; biological processes; spaceflight microgravity; Arabidopsis thaliana
►▼ Show Figures 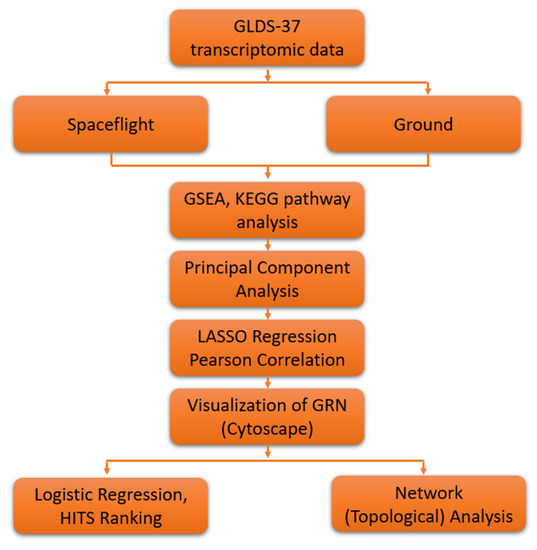