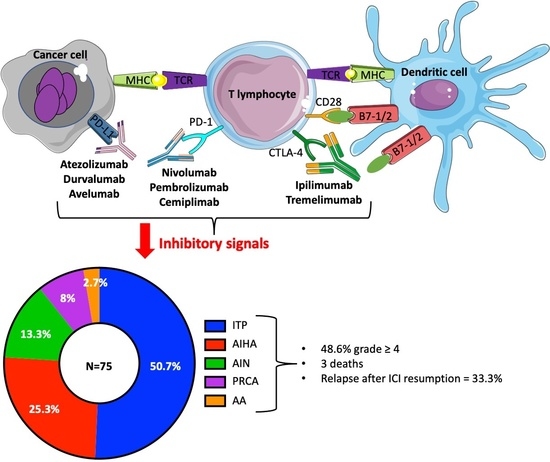 Immune checkpoint inhibitors (ICIs) are nowadays the standard of care in the treatment of different types of cancers [1]. ICIs promote antitumor immune response through inhibition of cytotoxic T-lymphocyte-associated-4 (CTLA-4) (ipilimumab, tremelimumab), programmed cell death protein 1 (PD-1) (nivolumab, pembrolizumab and cemiplimab) or PD ligand 1 (PD-L1) (atezolizumab, durvalumab and avelumab) [2,3,4]. Despite often durable responses to ICI treatment, its use has been associated with a broad spectrum of immune-related adverse events (irAEs), due to the ICI-induced T cell cytotoxicity and B-cell synthesis of autoantibodies, possibly leading to ICI-related cytopenias [2]. However, precise underlying mechanisms remain unknown. IrAEs could be severe and affect various organs or system [5]. With the rapid and broad expansion of ICIs in clinical practice, a concern emerged about the risk of hematological irAEs in patients receiving ICI treatment. In fact, ICI-related cytopenias have been poorly described because of low incidence and possibly lack of recognition. Indeed, diagnosis of ICI-related cytopenias remains challenging, especially in patients receiving ICIs in combination with cytotoxic chemotherapy or radiotherapy. The largest published series of hematological irAEs arising from ICIs to date did not provide any clinical data regarding diagnosis criteria or management [6,7,8], and the conclusions were consequently limited. Using the French pharmacovigilance database, this study aimed to further characterize ICI-related cytopenias after ICI treatment.

Using MedDRA terms ‘Blood and lymphatic disorders’ and ‘Investigations’ (System Organ Class Level), all grade ≥ 2 hematological adverse drug reactions involving at least one of the ICIs (including nivolumab, pembrolizumab, cemiplimab, ipilimumab, tremelimumab, atezolizumab, durvalumab and avelumab) coded as suspected or interacting drugs according to the World Health Organization criteria and reported up to 31 March 2022, were extracted from the French pharmacovigilance database. Patients were eligible if they experienced grade ≥ 2 cytopenia after ICI treatment. Diagnosis and response criteria for each ICI-related cytopenia are provided in Methods S1 [11,12,13,14,15,16]. Patients were excluded if cytopenia was probably not caused by ICIs (i.e., chemotherapy-induced cytopenia, systemic lupus erythematosus [17], chronic lymphocytic leukemia [18] or ongoing infection [13,14,19,20,21,22]). Doubtful cases were reviewed by a board of experts in hematology, autoimmune diseases, and pharmacovigilance (MA, MP and MM). ICI resumption was defined, as previously published [23], as ICI discontinuation for a period at least equal to twice the duration of a cycle, with subsequent ICI restarting.

Patient general characteristics, including age, sex, body mass index and characteristics of the ICIs (type, indication, number of courses, resumption) were recorded. For immune-related cytopenias, the following characteristics were collected: type, time to occurrence, grade of severity according to the National Cancer Institute Common Terminology Criteria for Adverse Events v5.0, as well as their treatment(s) and outcomes.

In accordance with French regulations, this study did not require ethical review. The French pharmacovigilance database was registered with the French data protection agency (Commission Nationale de l’Informatique et des Libertés) (deliberation No. 2014-302, 10 July 2014). Informed consent was not required as it involved an existing anonymized database.

We included 68 patients with a total of 75 ICI-related cytopenias (Figure 1). Patient characteristics are detailed in Table 1. Sixty-three percent were men, and the median age was 63.0 (58.0–70.5) years. Seven out of 68 (10.3%) patients had a history of autoimmune disease. The most common malignancies were lung cancer (47.1%) and melanoma (32.4%). Regarding the types of ICIs, 80.9% of patients were receiving an anti-PD-1 agent, 8.8% an anti-CTLA-4 and anti-PD-1 combination, 7.4% an anti-PD-L1 agent, and 2.9% an anti-CTLA-4 agent. ICI treatment was prescribed as first-line treatment and combined with chemotherapy in 47.2% and 7.5%, respectively. Three patients (4.4%) died from ICI-related cytopenias: two due to bleeding complications of refractory immune thrombocytopenic purpura (ITP) and one due to pulmonary embolism and ischemic stroke related to patent foramen ovale in a context of active autoimmune hemolytic anemia (AIHA).

3.2. Characteristics of the ICI-Related Cytopenias

The French pharmacovigilance database is registered with the French data protection agency (Commission Nationale de l’Informatique et des Libertés, CNIL) (deliberation no. 2014-032, 10 July 2014). In accordance with French regulations, formal approval by an investigational review board is not required for this type of study.

Patient consent was waived according to the French regulations as all the data recorded in the French pharmacovigilance database are anonymous and already registered with the French data protection agency.

The data that support the findings of this study are available from the corresponding author upon reasonable request. The data are not publicly available due to privacy or ethical restrictions.

The authors would like to thank the 30 centers of the French pharmacovigilance network, and Jeffrey Arsham, supported by funding from Poitiers University Hospital for English editing. 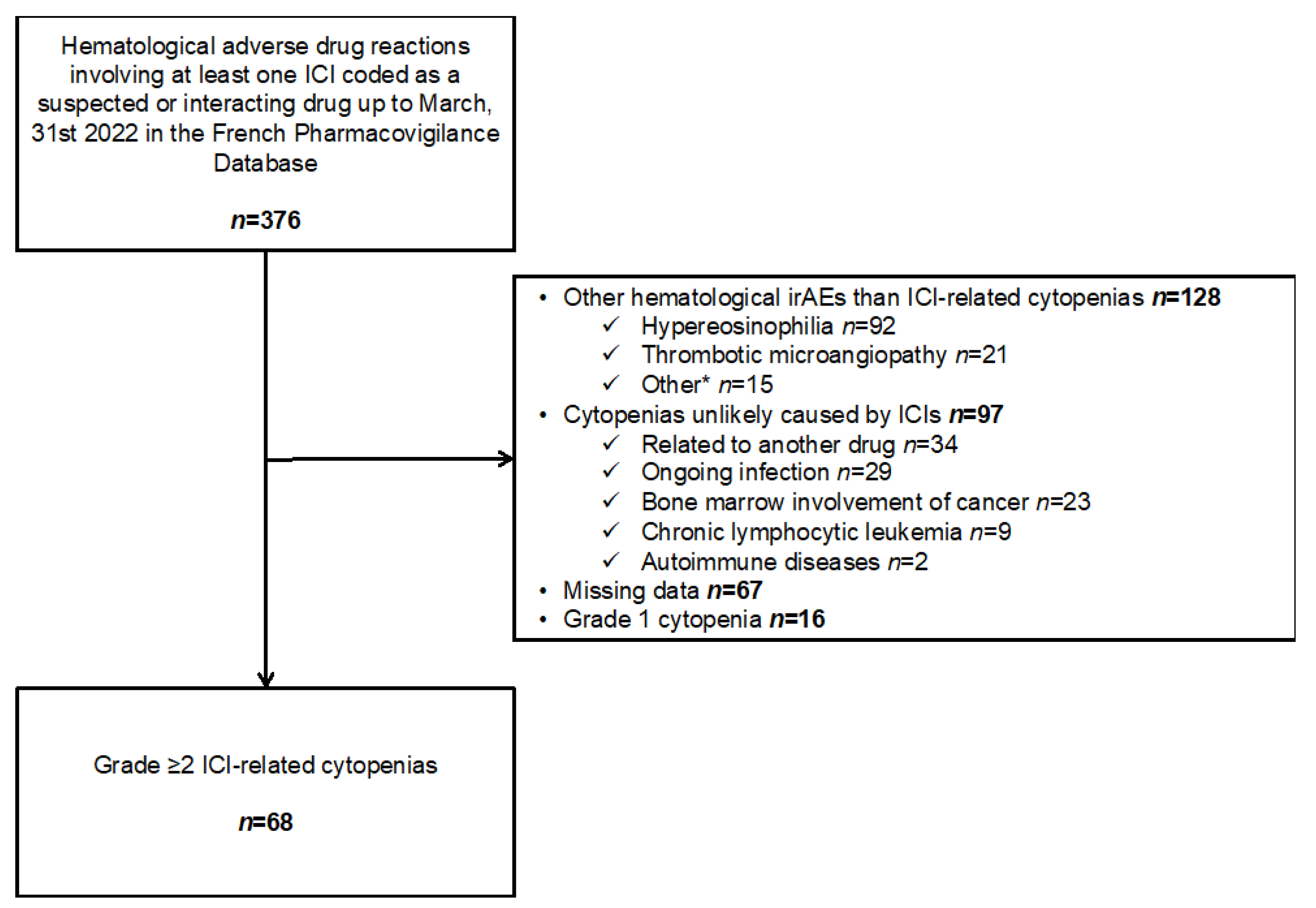