In our previous study, purinergic P2Y2 receptor (P2Y2R) activation by ATP was found to play an important role in tumor progression and metastasis by regulating various responses in cancer cells and modulating crosstalk between cancer cells and endothelial cells (ECs). Therefore, we expected that P2Y2R would play a critical role in radioresistance and enhanced tumor progression in radioresistant triple-negative breast cancer (RT-R-TNBC). However, interestingly, P2Y2R expression was slightly decreased in RT-R-TNBC cells, while the expression of A2AR was significantly increased both in RT-R-TNBC cells and in tumor tissues, especially triple negative breast cancer (TNBC) tissues of breast cancer (BC) patients. Thus, we aimed to investigate the role of adenosine A2A receptor (A2AR) and its signaling pathway in the progression of RT-R-TNBC. The results reveal for the first time the role of A2AR in the progression and metastasis of RT-R-BC cells and suggest that the adenosine (ADO)-activated intracellular A2AR signaling pathway is linked to the AKT-β-catenin pathway to regulate RT-R-BC cell invasiveness and metastasis.

Recently, we found that the expressions of adenosine (ADO) receptors A2AR and A2BR and the ectonucleotidase CD73 which is needed for the conversion of adenosine triphosphate (ATP) to adenosine diphosphate (ADP) and the extracellular ADO level are increased in TNBC MDA-MB-231 cells and RT-R-MDA-MB-231 cells compared to normal cells or non-TNBC cells. The expression of A2AR, but not A2BR, is significantly upregulated in breast cancer tissues, especially TNBC tissues, compared to normal epithelial tissues. Therefore, we further investigated the role of ADO-activated A2AR and its signaling pathway in the progression of RT-R-TNBC. ADO treatment induced MDA-MB-231 cell proliferation, colony formation, and invasion, which were enhanced in RT-R-MDA-MB-231 cells in an A2AR-dependent manner. A2AR activation by ADO induced AKT phosphorylation and then β-catenin, Snail, and vimentin expression, and these effects were abolished by A2AR-siRNA transfection. In an in vivo animal study, compared to 4T1-injected mice, RT-R-4T1-injected mice exhibited significantly increased tumor growth and lung metastasis, which were decreased by A2AR-knockdown. The upregulation of phospho-AKT, β-catenin, Snail, and vimentin expression in mice injected with RT-R-4T1 cells was also attenuated in mice injected with RT-R-4T1-A2AR-shRNA cells. These results suggest that A2AR is significantly upregulated in BC tissues, especially TNBC tissues, and ADO-mediated A2AR activation is involved in RT-R-TNBC invasion and metastasis through the AKT-β-catenin pathway. View Full-Text
Keywords: adenosine; A2AR; Akt; β-catenin; radiotherapy-resistant breast cancer cells adenosine; A2AR; Akt; β-catenin; radiotherapy-resistant breast cancer cells
►▼ Show Figures 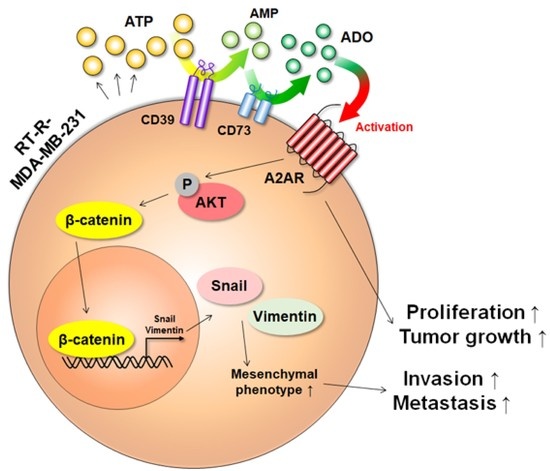