FGF/FGFR Signaling in Hepatocellular Carcinoma: From Carcinogenesis to Recent Therapeutic Intervention
Next Article in Special Issue

Resistance to Immune Checkpoint Blockade in Uterine Leiomyosarcoma: What Can We Learn from Other Cancer Types?
Previous Article in Journal

The Prognostic Role of LRIG Proteins in Endometrial Cancer

Over the past few years, there have been many studies investigating the LRIG (leucine-rich repeats and immunoglobulin-like domains) family of transmembrane proteins, focusing mainly on their role in cancer progression. However, the prognostic role of the proteins in endometrial cancer was not studied, even though it is the most common gynecologic cancer in developed countries. Therefore, our research group aimed to fill this knowledge gap. Here, our study analyzed endometrial cancer tissue using immunohistochemistry. As a result, we found that one of the LRIG proteins—LRIG3—might influence endometrial cancer survival rates. However, the role of the LRIG1 and LRIG2 proteins in the group remains to be clarified. In conclusion, our study expands upon knowledge on the prognostic role of LRIG family in gynecological malignancies.

Endometrial cancer (EC) is the most common gynecologic malignancy in Sweden and it has various prognostic factors. The LRIG family is a group of three integral surface proteins with a similar domain organization. The study aimed to explore LRIG family as prognostic factor proteins in EC. The initial study cohort included 100 women with EC who were treated at the Department of Women’s and Children’s Health, Karolinska University Hospital Solna, between 2007 and 2012. We assessed the associations between LRIG protein expression and type, grade, and stage of EC, as well as progression-free and overall survival. Immunohistochemistry results revealed that most women in the analytical sample had >50% LRIG1-, LRIG2- and LRIG3-positive cells. A statistically significant association was observed between having a high number of LRIG3-positive cells and superior overall survival (incidence rate ratio = 0.977; 95% confidence interval: 0.958–0.996, p = 0.019). Moreover, positive LRIG3 staining of the cell membrane was associated with reducing in the risk of death (hazard ratio = 0.23; 95% confidence interval: 0.09–0.57). Our results show that LRIG3 expression might be a prognostic factor in EC. The role of LRIG1 and LRIG2 expression remains to be further investigated. View Full-Text
Keywords: LRIG1; LRIG2; LRIG3; endometrial cancer; prognosis LRIG1; LRIG2; LRIG3; endometrial cancer; prognosis
►▼ Show Figures 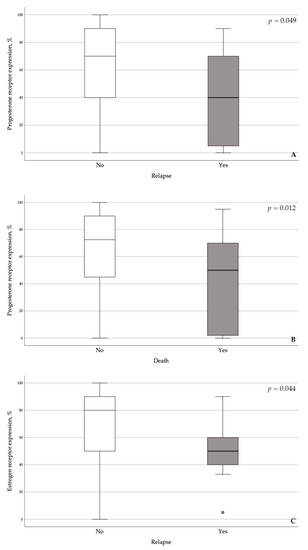