Current Status of Management and Outcome for Patients with Ewing Sarcoma

Biological Heterogeneity of Chondrosarcoma: From (Epi) Genetics through Stemness and Deregulated Signaling to Immunophenotype

Chondrosarcoma (ChS) is the second most frequently diagnosed malignant bone tumor of cartilaginous origin and is generally resistant to standard treatment options. In this paper, we aim to review the current state of the knowledge regarding ChS. We discuss the genetic, epigenetic, and molecular abnormalities underlying its substantial biological and clinical heterogeneity. This review summarizes the critical genetic and molecular drivers of ChS development and progression, contributing to its radio- and chemotherapy resistance. We describe genomic aberrations and point mutations, as well as epigenetic modifications and deregulated signal transduction pathways. We provide an insight into the stem-like characteristics and immunophenotype of ChS. The paper also outlines potential diagnostic and prognostic biomarkers of ChS and recently identified novel targets for future pharmacological interventions in patients.

Chondrosarcoma (ChS) is a primary malignant bone tumor. Due to its heterogeneity in clinical outcomes and resistance to chemo- and radiotherapies, there is a need to develop new potential therapies and molecular targets of drugs. Many genes and pathways are involved in in ChS progression. The most frequently mutated genes are isocitrate dehydrogenase ½ (IDH1/2), collagen type II alpha 1 chain (COL2A1), and TP53. Besides the point mutations in ChS, chromosomal aberrations, such as 12q13 (MDM2) amplification, the loss of 9p21 (CDKN21/p16/INK4A and INK4A-p14ARF), and several gene fusions, commonly occurring in sarcomas, have been found. ChS involves the hypermethylation of histone H3 and the decreased methylation of some transcription factors. In ChS progression, changes in the phosphatidylinositol 3-kinase/protein kinase B/mammalian target of rapamycin (PI3K–AKT–mTOR) and hedgehog pathways are known to play a role in tumor growth and chondrocyte proliferation. Due to recent discoveries regarding the potential of immunotherapy in many cancers, in this review we summarize the current state of knowledge concerning cellular markers of ChS and tumor-associated immune cells. This review compares the latest discoveries in ChS biology from gene alterations to specific cellular markers, including advanced molecular pathways and tumor microenvironment, which can help in discovering new potential checkpoints in inhibitory therapy. View Full-Text
Keywords: primary bone tumor; cartilage-forming malignancy; chondrosarcoma; mesenchymal stem cell primary bone tumor; cartilage-forming malignancy; chondrosarcoma; mesenchymal stem cell
►▼ Show Figures 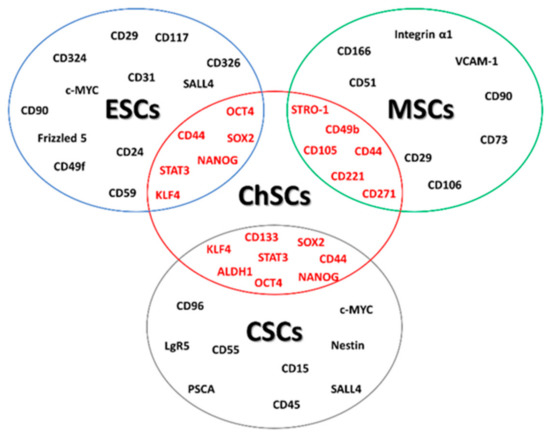