Piecemeal endoscopic mucosal resection (EMR) has proved to be an excellent resection technique for large colorectal polyps. However, a key limitation is the inaccurate histologic assessment of the sample in cases where there is invasion of the submucosa. Thus piecemeal EMR should be avoided if submucosal invasion is suspected. Furthermore, both western and eastern scientific societies have recently recommended that treatment should be based on optical diagnosis (ideally with magnification) which estimates the histology endoscopically. However, experience with magnification in western countries is limited. This study primarily aims to develop a classification system based on endoscopic features to identify intramucosal neoplasia (absence of submucosal invasion) in non-pedunculated lesions ≥20 mm assessed by western endoscopists with narrow band imaging (NBI) and without magnification. We observed that non-ulcerated LST-granular type and LST-non-granular flat elevated lesions represent 58.8% of all non-pedunculated lesions ≥20 mm and are associated with a low risk of submucosal invasion (3.8%). Therefore, we suggest these lesions be treated by piecemeal EMR. In the remaining lesions further diagnostic techniques such as magnifying endoscopy or en bloc resection should be considered.

The detection of early colorectal cancer has increased since the introduction of bowel cancer screening programs (BCSP) based on a colonoscopy after a positive fecal immunochemical test (FIT). Forty-six per cent of cancers diagnosed in a BCSP are stage I, and endoscopically resected T1 lesions account for 20% of all colorectal cancers [1].
Large colorectal polyps can be removed by piecemeal endoscopic mucosal resection (EMR), en bloc endoscopic submucosal dissection (ESD) or surgery. Piecemeal EMR has proved to be an excellent resection technique. However, one of its most important limitations is the inaccurate histologic assessment of the sample in the case of invasion of the submucosa (sm). Multiple, poorly-oriented pieces make it difficult to ensure R0 margins, evaluate the depth of invasion, and thus assess the risk factors for lymph node metastasis.
Although endoscopic resection of high-risk T1 colorectal carcinoma (CRC) before surgical resection has no adverse effect on long-term outcomes [2], the limited accuracy of optical diagnosis for predicting sm invasion leads to suboptimal treatment decisions. In the Dutch BCSP, 25% of locally removed T1 CRCs were resected by piecemeal EMR because sm invasion was not suspected. This led to additional surgery in all patients, as the R0 margin and risk factors for LNM could not be assessed [3]. In that study, adjuvant surgery after local treatment was more frequently indicated in patients with T1 CRCs that were not correctly optically diagnosed (41% vs. 11%, p = 0.02) [3]. In these cases, ESD would have allowed a more precise histological diagnosis, and additional surgery might have be avoided if none of the risk factors were present. Therefore, although the polyp is amenable to removal by piecemeal EMR, suspicion of sm invasion is crucial before performing the procedure.
The European Society of Gastrointestinal Endoscopy and the US Multi-Society Task Force have recently recommended that treatment should be based on optical diagnosis, not on the endoscopist’s skill [4,5,6]. Japanese guidelines support en bloc endoscopic resection for lesions that might harbour carcinoma, and piecemeal EMR when carcinoma is ruled out with optical diagnosis with magnification [7,8]. However, experience with magnification in western countries is limited.
Previous studies without magnification have already shown that morphology can help to predict which lesions are at higher risk of containing submucosal invasion [9,10,11]. However, all these studies are based on retrospective data and/or regression analysis and can only properly identify a very small subgroup of lesions that can be accurately classified.
Our previous prospective multicentre study, including 2153 lesions >10 mm, found a very stable decision tree for predicting deep sm invasion [12]. The assessment of three features was enough to (1) rule out deep sm invasion and recommend endoscopic treatment in 87% of the lesions; (2) predict deep sm invasion and recommend surgery in 1% of cases; (3) determine lesions with intermediate probability of deep sm invasion that may require further assessment with magnification (12%). However, this study included pedunculated polyps and lesions between 10 and 20 mm, which are more suited to endoscopic removal en bloc, and aimed to predict deep sm invasion in order to recommend surgery.
This study’s primary aim is to develop a classification system based on endoscopic features to identify intramucosal neoplasia (absence of submucosal invasion) in non-pedunculated lesions ≥20 mm assessed by western endoscopists with NBI and without magnification. These lesions may be candidates for piecemeal EMR. Secondary aims were to develop a classification system to identify shallow and deep sm invasion, to be treated with ESD and surgery respectively.

Post-hoc analysis of an observational prospective multicentre study was conducted at 17 academic and community hospitals by 58 endoscopists. The main results for predicting deep sm invasion in lesions >10 mm have been already published [12]. As in the previous study “the Standards for Reporting of Diagnostic Accuracy recommendations were followed. The protocol was registered in ClinicalTrials.gov (NCT02328066) and was approved by the local ethics committee (Code number CEIC14/47). Patients provided written informed consent before inclusion. Study data were collected and managed using REDCap electronic data capture tools hosted at the Asociación Española de Gastroenterología website (www.aegastro.es, accessed on 1 June 2014) (Supplementary Document S1)” [12].

Categorical variables are presented as absolute values and relative frequencies. Continuous variables are summarised as means and standard deviations (SDs) or as medians and interquartile range in the case of non-normal distributions.
The variables associated with deep invasion were examined using bivariate analysis. Student’s t-test or the non-parametric Mann–Whitney test were used for continuous variables. Chi-square test, Fisher’s exact test, or the Monte Carlo method (in 2 × 2 contingency tables or n × 2, where the expected frequencies were <5) were used for categorical variables.
Unbiased conditional inference trees (CTREE) were fitted to identify intramucosal neoplasia, including the lesions’ optical characteristics. CTREE is a conditional recursive partitioning algorithm that solves both the overfitting problem and the variable selection bias present in other recursive partitioning algorithms. This methodology aims to maximise the predictive power through relevant interaction detection, while keeping a simple and clinically relevant structure. All the variables are potential candidates for inclusion in the model. Compared to classical multivariable analysis (i.e., logistic regression), the variable selection process is automated, and no assumptions regarding the underlying structure and distribution are needed. As a result, the tree shows the variables in a hierarchical structure of the model that has a relative real weight for taking decisions, not only statistically significant ones. This approach is thus more aligned with human decision making when facing a problem of clinical diagnosis. The conditional inference tree methodology is described in more detail in the Supplementary Document S2 [16,17,18].
The level of statistical significance was 2-sided 5% (p < 0.05). For the statistical analysis, STATA, version 14 (StataCorp LP, College Station, TX, USA, 2015) and R: A language and environment for statistical computing v3.6.3 (64b) (R Foundation for Statistical Computing, Vienna, Austria, 2016) were used [12].

Between July 2014 and June 2016, a total of 2123 lesions >10 mm that were not obvious cancer (type 0 in Paris classification) were collected from 1634 consecutive patients. After excluding pedunculated lesions and those measuring less than 20 mm, 542 superficial lesions from 517 patients were included in the analysis. The blinded and centralised histological assessment was performed from July 2016 to March 2017. Patients’ mean age was 68.3 (SD 10.5) years, and 313 (60.5%) were male. The colonoscopy indication was asymptomatic screening in 321 (62.1%) patients and clinical symptoms in 196 (37.9% patients). Lesion characteristics are shown in Table 1.

No stable CTREE algorithm was able to identify nine out of 542 lesions with shallow sm invasion.

In conclusion, non-ulcerated LST-G type and LST-NG flat elevated lesions represent 58.8% of all non-pedunculated lesions ≥20 mm and are associated with a low risk of sm invasion (3.8%). Therefore, these lesions can be directly treated by piecemeal EMR. However, for the rest of the non-pedunculated polyps ≥20 mm (41%) further diagnostic techniques like observation with magnification are recommended for better selection of those that would benefit from an en bloc resection. In this scenario, ESD might also be considered as a diagnostic tool to provide high-quality specimens for further histological assessment.

This study has been funded by Instituto de Salud Carlos III through the project “PI18/01132” (Co-funded by European Regional Development Fund/European Social Fund “A way to make Europe”/”Investing in your future”), the Spanish Gastroenterological Association and the Spanish Digestive Endoscopy Society.

The study was conducted according to the guidelines of the Declaration of Helsinki, and approved by the Ethics Committee of FUNDACIÓ UNIÓ CATALANA D’HOSPITALS (protocol code CEIC14/47, 29 May 2014).

The data presented in this study are available on request from the corresponding author. The data are not publicly available due to the spanish data protection law that restricts access to pseudo-anonymized personal data.

Ignasi Puig has served as a speaker for Fujifilm and his department has received loans of equipment to conduct a study from Olympus Europe (2019–2021) and Fujifilm Europe (January 2019–December 2019). The funders had no role in the design of the study; in the collection, analyses, or interpretation of data; in the writing of the manuscript, or in the decision to publish the results. 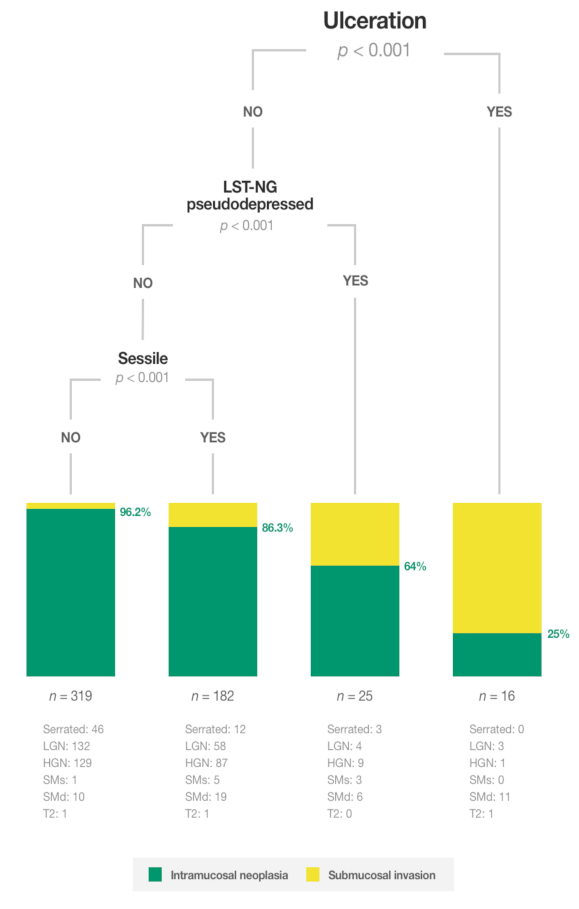