The transcription factor RBPJ is an integral part of the Notch signaling cascade. RBPJ can function as a coactivator when Notch signaling is activated but acts as a repressor in the absence of a Notch stimulus. Here, we characterized the function of RBPJL, a pancreas-specific paralog of RBPJ. Upon depletion of RBPJ using CRISPR/Cas9, we observed specific upregulation of Notch target gene expression. Reconstitution with RBPJL can compensate for the lack of RBPJ function in the repression of Notch target genes but is not able to mediate the Notch-dependent activation of gene expression. On the molecular level, we identified a limited capacity of RBPJL to interact with activated Notch1–4.

The Notch signaling pathway is an evolutionary conserved signal transduction cascade present in almost all tissues and is required for embryonic and postnatal development, as well as for stem cell maintenance, but it is also implicated in tumorigenesis including pancreatic cancer and leukemia. The transcription factor RBPJ forms a coactivator complex in the presence of a Notch signal, whereas it represses Notch target genes in the absence of a Notch stimulus. In the pancreas, a specific paralog of RBPJ, called RBPJL, is expressed and found as part of the heterotrimeric PTF1-complex. However, the function of RBPJL in Notch signaling remains elusive. Using molecular modeling, biochemical and functional assays, as well as single-molecule time-lapse imaging, we show that RBPJL and RBPJ, despite limited sequence homology, possess a high degree of structural similarity. RBPJL is specifically expressed in the exocrine pancreas, whereas it is mostly undetectable in pancreatic tumour cell lines. Importantly, RBPJL is not able to interact with Notch−1 to −4 and it does not support Notch-mediated transactivation. However, RBPJL can bind to canonical RBPJ DNA elements and shows migration dynamics comparable to that of RBPJ in the nuclei of living cells. Importantly, RBPJL is able to interact with SHARP/SPEN, the central corepressor of the Notch pathway. In line with this, RBPJL is able to fully reconstitute transcriptional repression at Notch target genes in cells lacking RBPJ. Together, RBPJL can act as an antagonist of RBPJ, which renders cells unresponsive to the activation of Notch. View Full-Text
Keywords: Notch signaling; RBPJL; RBPJ; transcriptional repression; PDAC; Ptf1a; SHARP; AML Notch signaling; RBPJL; RBPJ; transcriptional repression; PDAC; Ptf1a; SHARP; AML
►▼ Show Figures 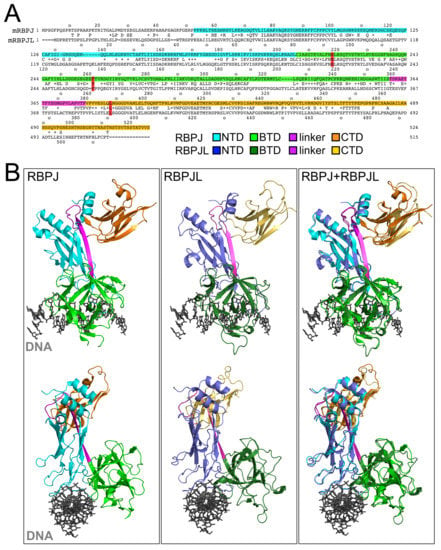